Deciding who gets a lung transplant - and thereby who doesn’t - is not easy.  Lungs can only be transplanted from people who are organ donors, who are brain dead, and who died in such a way that their organs remain intact.  Problem is, there are not enough people marking the “organ donor” box on their driver’s license to give everyone on the transplant list a chance to live. The current lung allocation system was revamped in 2005 to try and make it more fair.  Previously, your place in line was determined by how long you had been waiting.  That system incentivized people to get on the list before they really needed a lung just to accumulate waiting time, and it essentially sentenced to death anyone whose lungs went downhill too quickly.  The new system tries to optimize lung allocation by considering both how bad your lungs are and how much good a transplant is likely to do for you.  This is meant to be more fair, but as long as more people need new lungs than are willing to donate, somebody is going to die waiting on the list.

The system works differently for children under 12, like the two dying kids whom a judge recently ordered placed on the regular transplant list.  Kids under 12 have priority for any lungs donated by other kids under 12, which are few and far between, but they are put at the bottom of the list for any lungs from older donors.  The Organ Procurement and Transplantation Network (OPTN) says young children’s small size can make transplantation of adult lungs tricky and may reduce the probability of success.  This is hard to know, however, because only one child under 12 has received an adult lung since 2007.

A dying Pennsylvania girl’s family, fighting for her life with any means they can find, recently won a court order saying that this separation was discriminatory.  In response, the OPTN agreed to allow children under 12 onto the adult waiting list as well, but only for one year while they evaluate the available evidence.  In effect, the judge has ordered a medical experiment to see whether adult lungs work in children, and the OPTN agreed to run it for a year and see what happens.

Only time will tell whether this rule change will save the Pennsylvania girl’s life, and unfortunately she may not have much of it left.  As of June 7, there were 1659 people waiting for a lung transplant in the US.  In 2011, 1753 people began the year on that list, and 351 died waiting.  That’s about 20%, which is not that much less than the 26.5% of children who died on the pediatric waiting list the same year. 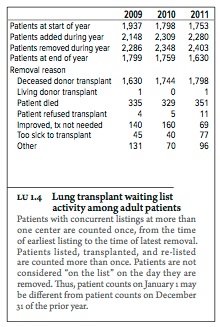 Fortunately, there is an easy way to save these patients’ lives that would be more effective than any court ruling.  That would be for everyone reading this to register to be an organ donor.  The process varies by state, but the link above will tell you everything you need to know.  This court case may ultimately be a zero-sum game - any lungs going to children under 12 will not go to patients 12 and older - but if the publicity encourages even a few people to register as organ donors, perhaps it will do some good for all patients.