Even if it leaves you too tired to come back and read my own humble offerings - but I hope you do come back  -  there are two very topical blog posts that I want to recommend to you:

Tell good stories that entertain and are relevant. It is so easy to say “use simple everyday life language”, but for a scientist who are trained to do the exact opposite it hurts. Almost physically.
Bente Lilja Bye - Taming The N-headed Science Troll: Using New Media As A Communication Tool Within The Science And Technology Community.
NB: this article has (almost) nothing to do with blog trolls: it's about communicating science.

... nothing really spectacular has been happening with the Arctic sea ice in the past few weeks. But this depends on your perspective of course, as there's always more to the eye in the Arctic.
Neven - SIE update 6: unperturbed

It is true indeed that nothing much appears to be happening in the Arctic lately - at first sight.  But as Neven and his contributors so astutely notice: there is much more to the Arctic ice than meets the eye.

Let us try a thought experiment.  On a planet much like Earth there is a cap of sea ice 1000km in radius.  Over most of the last 5000 of its Earth-like years the ice has shrunk in summer and grown back in winter, with minor fluctuations.  However, about 200 years ago there was a minuscule rise in average planetary temperature such that there was a minuscule trend downwards in the sea ice extent.  It is in the nature of many micro-influences in physical processes that their compounded effects over time show an acceleration in the amount of the influence and its effect.

Our hypothetical circle of ice averages 1000km radius before a constant micro-change in temperature causes a corresponding micro-change in radius.  For example, a change in the average temperature over the ice of a mere 0.01oC might be thought to have no significant effect.  However, where the ice is on the threshold of melting, as at the edge where ice meets open sea, or at the edge of a polyna, that tiny amount of extra energy makes the difference between the ice melting or not melting.  Each year, the ice which would not otherwise have melted is replaced by open water.

In this thought experiment, or model, if heat is not trapped in Arctic winter then there is no reason why the ice would not recover every winter despite the trivial extra melt.  But let us model some permanent micro-change in the atmosphere which traps at least some heat every winter.  Following an initial constant micro-change in temperature, the micro-changes in ice extent and open water surface accumulate.  At first, the amount of ice loss is entirely trivial, but given enough time the ice will vanish entirely in summer.  Simply put: the volume of ice melted each summer - and not fully replaced in winter - will form a gradually rising percentage of the end-of winter ice.  That rising percentage will show an accelerating trend with the greatest acceleration as it nears 100%.  In the first ice-free summer the 100% melt of the remaining ice will be rapid.

If you accept the reality of the butterfly effect - the ability of a micro-perturbation to move a dynamic system from one stable regime to another, then I expect that you will accept the reality of an impending summer-ice-free Arctic.  The notion that we humans are too puny to affect the global climate requires the rejection of tried and tested principles in chaos theory.  It also requires a suspension of the belief that humans are more powerful creatures than butterflies.

Back in the real world and the real Arctic, the continuing nosedive in sea ice extent is captured by many graphs and images across the web.  Overlaid graphs of annual ice extent do not show this trend: it is only when annual graphs are plotted end-to-end that the long term trend is obvious.  Compare the AMSRE graph with the Cryosphere Today's 'tale of the tape' to see this. 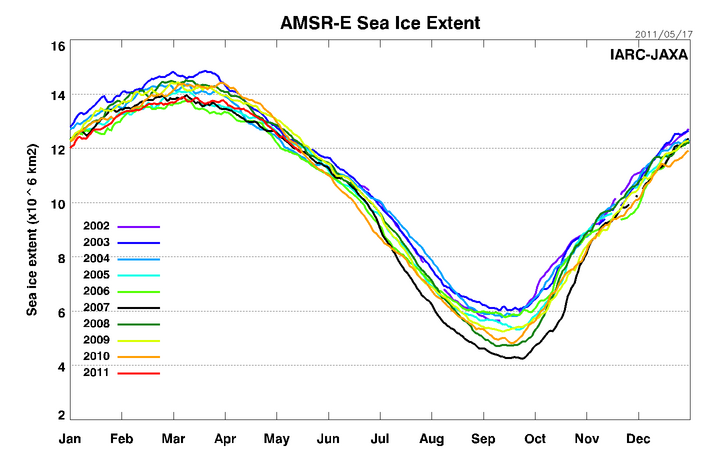 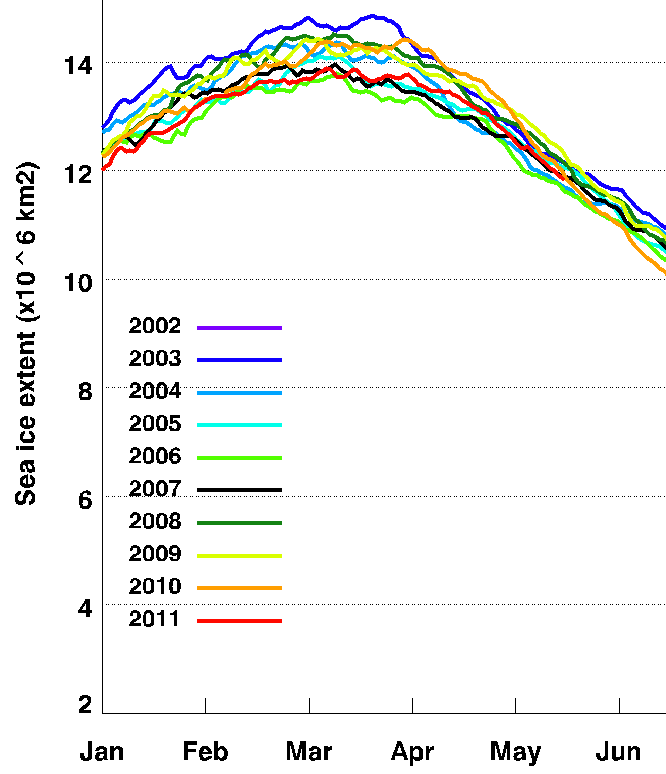 Tale of the Tape 2007 - 2011 detail
The trend in Arctic ice since 1979 is obvious at a glance from this graph.  Also obvious at a glance is the extremely anomalous behavior of the ice this year.  The decline in Arctic ice seems to be accelerating.  As an aside - there are some people who would prefer to believe that before the age of satellites the ice extent went up and down to the same extent.  That is wishful thinking.  We have many hundreds of reliable reports of ships with ice in the rigging, ships crushed by ice and men dying from the cold.  When we compare that with the number of reports of leisure craft sailing in the same waters - ice free waters - in recent years, we hardly need temperature records to tell us that the Arctic climate has changed.

The decline in Arctic sea ice volume is captured in some detail in this graph by FrankD - from a post at Neven's blog.  Please note that FrankD does not use this graph as a predictor of an ice-free Arctic.  However, if, as I expect, the loss of Arctic ice begins to accelerate, then the graph lends weight to the suggestion of a first substantially ice-free Arctic Ocean in summer 2016 at the latest. 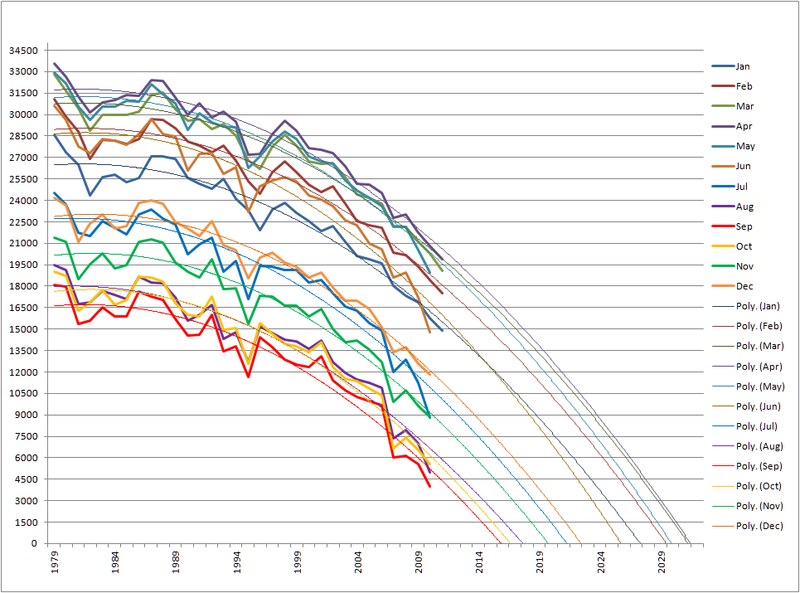 
If the globally averaged temperature of our planet has risen by even a fraction of a degree, the physics of the polar ice regime dictate that ice loss will be greater than a simple projection based on a micro-change in average temperature would indicate.  The climate is a chaotic system in which disturbances propagate and can amplify the original effect.  That is what feedbacks do.  That is the essence of the butterfly effect.

We know - from isotopic studies - that the current excess of CO2 in the atmosphere comes from the burning of fossil fuels.  We also know - from direct experimental proofs - that CO2 is a greenhouse gas.  Given that the amount of atmospheric CO2 is, and has been, increasing since the industrial revolution it is no surprise that globally averaged temperature has been increasing also.  The amount of human-caused temperature increase, although small in the general scale of things, is so great in its effects that it can be extracted from the mixed signal of all drivers of our planet's climate system.

A trivial but constant increase in global temperature is sufficient to bring about an Arctic ice-free-summer.  Human influences on climate have provoked a climbing temperature increase.  Our emissions of soot also promote ice melting through albedo change.  If a simple and entirely trivial rise in temperature can lead to an ice-free summer in the Arctic, how much more confident we must be that our non-trivial and constantly rising CO2 emissions - amongst other things - will bring about a much swifter end to Arctic sea ice than could nature unaided.  The puny human sure is one powerful butterfly!

For more of my Arctic-related articles, please see:
The ChatterBox Arctic Index
The Chatter Box
More Articles All Articles
About