For much of the written history of the Arctic, exceptional extents of open water were reported in terms of what the explorer, fisherman, whaler or sealer had previously experienced.  That would make such events likely every 20 to 30 years.  However, for each report of open ice in a specific area there is likely to be found in the archives a report from 180 degrees opposite across the pole of a greater than usual ice extent.

Within recent decades, and especially in the 21st century, we constantly see reports that total ice extent is the lowest, 2nd lowest or 3rd lowest ever recorded.  So far the lowest ever ice extent was in 2007 and we have charts and reports which show no such low extent since at least the 16th century.  It needs no great mathematical skill to deduce that if every year shows an ice extent amongst the lowest ever, there must have been some great change in the Arctic dynamic.

Unless there is a most dramatic change in the current Arctic dynamic, 2011 is virtually certain - in my opinion - to mark a new low with one of the 3 lowest ever extents.

Despite a slow start to the melt season due to unusually low temperatures over the Canadian Archipelago, the ice extent at this moment stands below that of 2007 for this day and has generally tracked below 2007 extent since May.  The following AMSR-E sea ice extent graphs show this quite clearly. 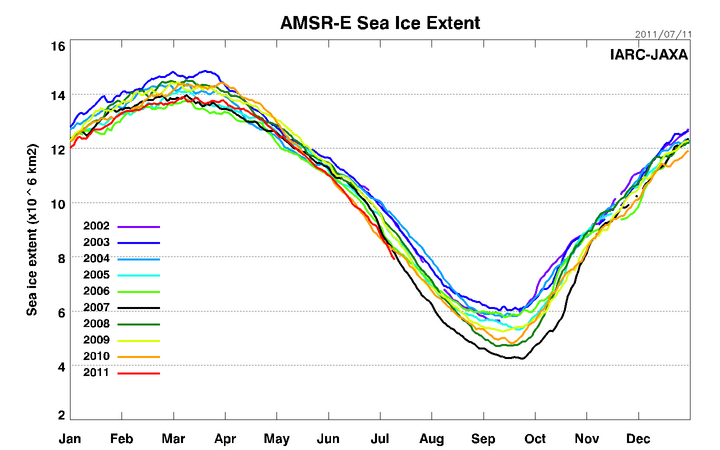 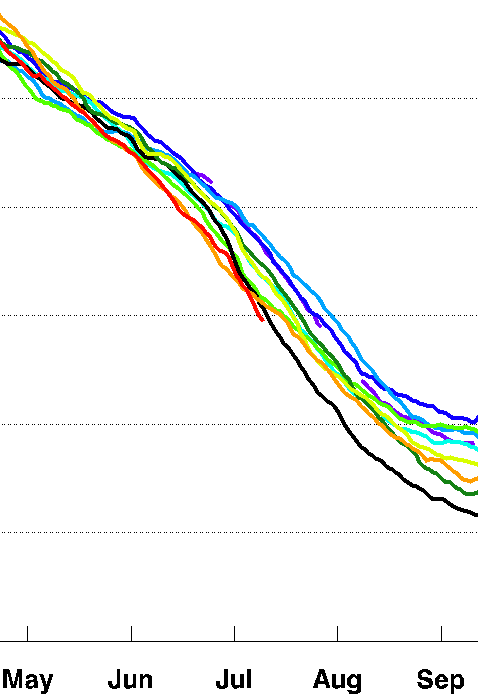 The Cryosphere Today sea ice anomaly timeseries shows that the anomaly plot for 2011 closely resembles that of 2007.  The following graphic is modified from the original to highlight the similarity.

The above graphics represent a new Arctic regime and a new reality.  Before, reduced ice extent in some part of the Arctic would often be matched by increased extent elsewhere.  Now, however, virtually any observer in the Arctic could say from May 2011 until now that they have never before seen so much open water in the Arctic at this time of year.


The view from rotten ice

When scientists select a floe on which to pitch their instruments, they obviously select the biggest, thickest floe that they can find.  This year, the floes on which the North Pole web cams were placed have proven to be somewhat weak.  Camera #1 appears to have toppled somewhat due to a crack in the ice - visible bottom right of image.  Camera #2 shows a vast melt pool which has drained through the ice.  Whether a floe is covered with snow or water makes no difference to its mass.  But if the water drains away, the reduced mass causes the ice to float higher.  The combined effect is to make it appear that the meltwater level has dropped more than it really has.  The raised freeboard of the ice is shown by camera #2 - a large chunk of ice has been left stranded above the new water level.

If these floes are thicker than average for the region then the ice near the pole must be of exceedingly low average thickness.  The graphic below shows that a majority of the sea ice is below 3 meters thick.  Over half of the thickest ice is situated where it can be flushed out of the main pack through Fram Strait or Nares Strait.

Ice is now flowing freely through Fram Strait.  Once the ice plug had melted and broken up, the ice behind it was certain to break up rapidly, being made up of floes glued together by this years new ice rather than by any great amount of pressure.

The only region where the main pack still presents an obstacle to passage along the Eastern route is at the coast between the New Siberian Islands and Logashkino, at the mouth of the Alazeya river.  In the main North West Passage, the ice which still blocks the route is confined to about a third of the length of the passage and is currently in process of breaking up.

I made the following prediction in my article Global Cooling : Beyond Parochialism,
January 16 2010

2011:
Reduced ice cover affects sea temperatures, in turn affecting Arctic current flows and air movements. Thinner ice, instead of piling up as pressure ridges due to compression effects, cracks into sections due to tension and agitation effects.
The Arctic is virtually ice-free by late summer: there is open water at the North Pole.

The ice is certainly much less compacted than in former times and the Beaufort Gyre - one of the drivers of compaction - appears to have been neither powerful nor steady so far this year.  There is still a chance of seeing extensive open water at the North Pole if the loss of extent continues to track close to or below 2007 levels.

As always, I welcome all contributions.  I apologize in advance if I am unable to find time to respond to every comment, although I will try.  My regular readers will know that I have been a bit ill lately, but quite apart from that I have been researching the history of climate science in considerable depth.  At this moment I am working on the translation of a rather old French climate science paper of considerable importance to science history.

I have recently written some articles on topics related to my recent historical researches.  Being related to Arctic science I have put them in The ChatterBox Arctic Index.