If not Latin, then what?

Please see the links at the foot of this page for my previous articles on the Voynich manuscript.

Only a few people claim that the language underlying the Voynich Manuscript is Latin. However, there are very many people who claim, without proof of an alternative, that the VM is not latin. 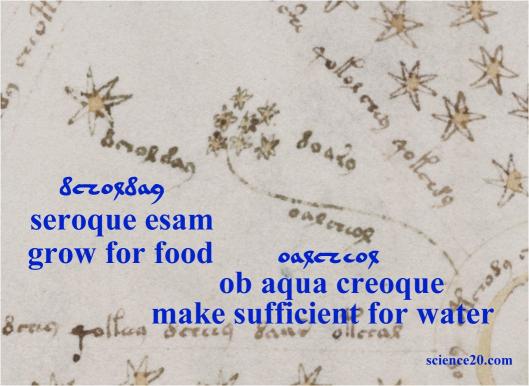 The "stars" are plants.

The illustrations in the VM are self-evidently the work of an amateur. It would hardly be surprising, then, to discover that the text is also the work of an amateur. The set of symbols certainly does not fit into any category or school of writing. Perhaps this set of symbols was invented by an amateur. If so, then this amateur was at liberty to re-think a method for writing: a method which used a mixture of widely known ideas.

"By the fourteenth century the use of cryptography had become increasingly widespread, with alchemists and scientists using it to keep their discoveries secret." Simon Singh, The Code Book.

Writers in code intend that they can read a document readily, but that others should be entirely unable to discern even one word. This, I suggest, is the intent of the author of the VM. Also, in a time when books were things of great monetary value, a book written in code would be of greater value if sold with a separate copy of the secret code. That copy, if it existed, is lost. The code, however, is not.

After years of exhaustive research I can now demonstrate that the symbols in the VM represent, variously, vowels, consonants with inherent vowels, syllables and bisyllables. Combine this mixture with word-position dependency and, as with much Latin abbreviation, context-dependency it is small wonder that the VM has not yet been decoded.

Firstly, on the reasonable assumption that the VM is not a work of literature but, rather, a reference book on the use of plants with baths, we may expect to find much use of words relating to that topic. Having first found two major groups of high-frequency words with the same stems, it remains only to make an educated guess as to what those stems are. In a book self-evidently about plants and baths it is likely that the stems foli - of leaves, ole - of oil should occur with high frequency.

Having found that the stems can be expressed in Latin, the next step is to find other words which use the symbols so far decoded. This produces more words of Latin appearance. Knowing how Latin words inflect leads to educated guesses about suffixes. Again, having decided on the transliteration into Latin of some suffixes it is possible to decode more words using the letters so far found.

As the method is repeated, more symbols can be transliterated into Latin. Given the great number of Latin words found so far, anyone who now hypothesises that the VM is not Latin must furnish proof sufficient to outweigh the evidence here provided for the hypothesis that the language in which the VM was written is Latin.

Below, some VM symbols transcribed into latin and translated into English. 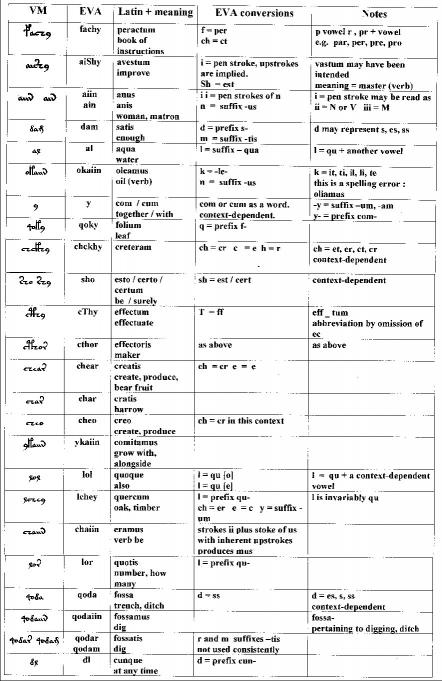 My previous articles on the VM.

Patterns of Latin in the Voynich Manuscript

The Voynich Manuscript - Speech Notes for a Presentation?

A wealth of information about the Voynich Manuscript -