[edit]  while I am unable to respond to comments here due to a bug, I am making use of Neven Curlin's Arctic Forum to exchange comments under the topic It is an ancient manuscript.


The Voynich Manuscript is written in Latin, using a medieval version of what we, today, call data compression.  Bear with me for a while as I demonstrate some of the oddball behaviour of language (and linguists!) by having some fun with language.  And do please follow the links for your further edification and amusement. 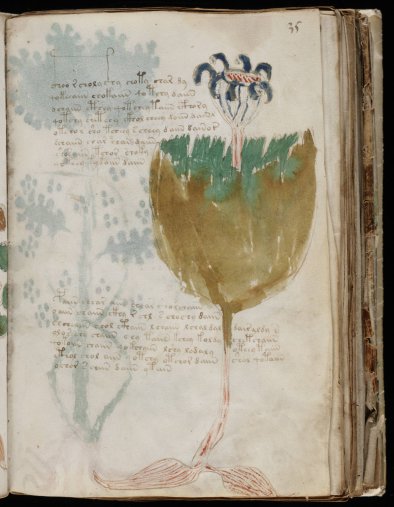 The Voynich Manuscript was written in medieval Latin shorthand aka brevigraphy, which is only slightly more unintelligible than Dog-Latin.

This terrible Dog-Latin translates as -

Latin is a language
as dead as dead can be
It killed off all the Romans
and now it's killing me.


It is, of course, not in the nature of language per se to kill anyone.  The reference is no doubt to the tendency of the schoolmaster of yore to encourage boys to learn Latin. In the Latin sense of that term.  Or maybe the French.

Corrig -o -er / cure / curate: to set someone straight, to reform, cure, curate, chastise etc., hence: reformatory, house of corrections.  However, a library curator is not supposed to flog books.  Nor does he or she thrash books, because you can't beat a good book.

The terms for 'correction' in English are somewhat ambiguous, as also in Spanish1.  That is because they are derived from Latin.  A "house of corrections" is not a synonym for a grammar school, although I am sure that it used to be.

My suggestion is that the expression "there's more than one way to skin a cat" originated in the  Royal Navy.

"BEN.  Look you, young woman, you may learn to give good words, however.  I spoke you fair, d’ye see, and civil.  As for your love or your liking, I don’t value it of a rope’s end; and mayhap I like you as little as you do me: what I said was in obedience to father.  Gad, I fear a whipping no more than you do.  But I tell you one thing, if you should give such language at sea, you’d have a cat o’ nine tails laid cross your shoulders."
1695, William Congreve, Love for Love, Scene vii

The cat o'nine tails, or cat, is a rope's end unravelled and formed into strands with knotted ends.  It was usually kept in a cloth bag.  An overheard remark could literally let the "cat" out of the bag.  The cat, again literally, was the scourge of the pressed sailor.  It was used in a correct manner - i.e. according to strict rules - to correct the behaviour of the wrongdoer.

During a flogging, which required enough room to swing a cat,  the cat might be briefly dunked in salt water to flush away the blood.  Or, perhaps, to increase the sting. 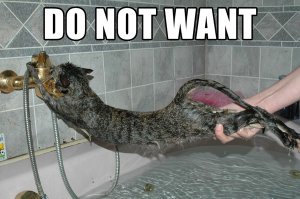 "the cat would be briefly dunked in water"
Credit: Cat Macros.

The cat would then be roughly rolled, coiled or skeined into its bag.  There was nothing in the ship's articles or the sailor's vade mecum to mandate a particular way of skeining the cat.  So, you see, there's more than one way to skein a cat.  All it takes is a misunderstanding and/or a spelling error and Bob's your uncle!


All of which has what to do with the Voynich Manuscript?

Please continue to bear with your author, of whom it may be said, as of Hamlet and of the author of the Voynich Manuscript: "There is method in his madness".

A skeined cat in its bag does not reveal its true shape and purpose.  It's just a bag of rope.  Similarly, the Voynich Manuscript presents as a jumble of symbols.  It appears to be a hoax or fake, a means of getting money for old rope.  Absent a key to the "Voynichese" symbols it is impossible to reveal the truth: to let the cat out of the bag.  Nota bene: the truth, not THE TRUTHTM.


May I flog you some Latin lessons?

To flog, in English slang, means to sell.  It can also mean to lash, flagellate, physically punish etc.  In olden times it seems that teachers had the strange notion that a subject could be thrashed into a subject, the former being a topic and the latter being an unfortunate pupil.  Hence the expression: "I'm just going to the Master's study to thrash out some Latin declension.".

The English language, although not directly derived from Latin may just as well have been.  About 80% of English is Latin-based or Latin-modified.  In the sciences the percentage is greater.  In fact, there is so much Latin embedded in the English language that any average person could understand most of the Voynich Manuscript if only it were written in Latin.  But it is.  Yes, the Voynich Manuscript is written in Latin.  A medieval variant of Latin, that is, not the formal "correct" Latin taught in the the grammar schools of yore.

The failures thus far to translate the Voynich Manuscript have been due to the "if all you have is a hammer, everything looks like a nail" factor.  A failure to think outside the box - of which I have also been guilty - has led researchers down many a blind alley.  Just as a "cat", in the context of the Royal Navy, has nine tails but no legs or head, so the illustrations and symbols in the Voynich Manuscript must be placed within specific historical and linguistic contexts in order to be fully understood.


The Voynich manuscript: its context.

Carbon dating put the Voynich Manuscript into a time context when parchment was gradually being replaced by paper as the medium of choice.  Soon after the Voynich Manuscript was presumably written, the invention of moveable type led to competition between scribes and printers.  I think we can all agree that the printers won the economic argument. 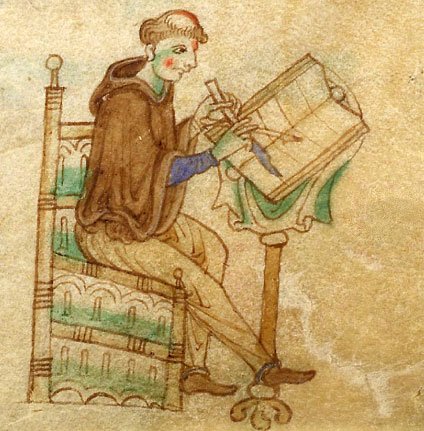 
As I remarked some time ago: printing led to a standardisation of spelling.  It also led gradually to the loss of the forms of writing which scribes had used to save on expensive parchment.

Printers soon learned to save time and money by using single blocks to combine common groups of letters.  In this respect, they were re-inventing the wheel: scribes had been using cliches for centuries.  The Voynich Manuscript was written  almost entirely using scribal cliches.  They are better know to scholars as breviographs.

The Voynich Manuscript is the medieval equivalent of our zip, arc, tar etc. files.  In order to write as much as possible on as little parchment as possible, the writer has used brevigraphs more extensively than was usual in medieval times.

When a manuscript is written using an excess of brevigraphs it can be unreadable to anyone who has not learned the set of brevigraphs applicable to the relevant time and place.  Since we do not know, but may only guess, the place where the Voynich Manuscript was written it is necessary to revert to old-school methods of cryptology to read that which, literally speaking, is not encrypted.


The art of cribbing

Cribbing is slang for cheating.  In days of yore, being caught cheating led to the pupil being corrected by the master.  In cryptology, a crib is a piece of information which may lead to the decoding of a message.  Using a known crib to decode a message may be automated.  Absent a known crib, one must hunt around for anything which may turn out to be a crib.  The "strange plants", for example, which could be a form of hieratic illustration.  That is to say, the part or parts of medical importance are drawn larger than the less useful parts.


Next > Cribs in the Voynich Manuscript

I expect you are dying to know if I have really cracked the problem.  Don't worry.  It's in the bag.  So as not to keep you in too much suspense, here is a gist of part of folio 1r, translated from the Latin.

With the repeated help of this book you will receive praise.  You will often obtain herbs of medical value from the wilds to prepare for herbal baths.  By preparing baths with these potions you will get retainers put into your bag.