Patrick Lockerby
The Keys to the Voynich Manuscript

[edit]  while I am unable to respond to comments here due to a bug, I am making use of Neven Curlin's Arctic Forum to exchange comments under the topic It is an ancient manuscript.

The keys to the Voynich Manuscript consist of Latin letters which replace the symbols in the manuscript.  I intend to publish a full chart of my findings very soon.  Meanwhile, here is a snippet of translation, using Takeshi Takahashi's transcription files. 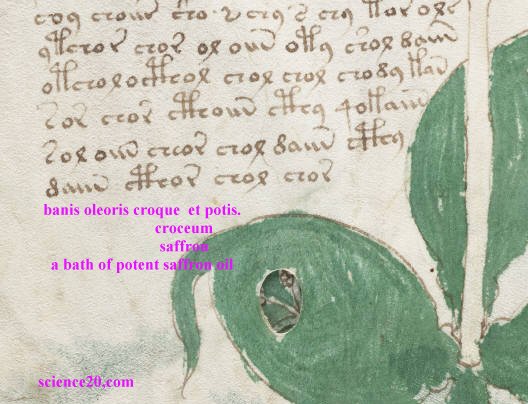 From the Online Etymological Dictionary -

crocus (n.)
late 14c., from Latin crocus, from Greek krokos "saffron, crocus," probably of Semitic origin (compare Arabic kurkum), ultimately from Sanskrit kunkumam, unless the Sanskrit word is from the Semitic one. The autumnal crocus (Crocus sativa) was a common source of yellow dye in Roman times, and was perhaps grown in England, where the word existed as Old English croh, but this form of the word was forgotten by the time the plant was re-introduced in Western Europe by the Crusaders.

Latin has many words derived from the core concept of crocus / yellow.  Just as any ball pen is likely to be called a biro by the masses, so it was with the crocus / saffron yellow.  The concept "crocus" appears multiple times in the VM to denote plants resembling the crocus or its oil, also anything yellow.  Look for [prefix-] + croc- + suffix/es.

It is, or should be, no surprise that the Voynich writing looks odd to us.  Time has a way of chopping off bits of culture and hurling them into the void.  What might a linguist make of this image, 500 years from now.  And what do you make of it?

In the preceding blog I demonstrated games with language as a warm-up to my thesis: that the Voynich Manuscript is written in medieval Latin.   The flexibility of language means that we may play games with it.  Tongue-twisters, puns, juegos de palabras - using words in wierd ways is as old as language itself, and maybe older1.  The relevance of word games to the VM is this: if you love language or if you like to do crosswords you can 'do' the VM.  With the help of a good Latin dictionary.  Also, if you see it as a game with words you will be more likely to see the patterns of Latin rhyme and aliteration, and semantic analogies between stems or roots, which I prefer to call semantic core concepts or cores.  Look at the VM script as sequences of prefix-core-suffix and you will find Latin words by the hundreds.


Cribs in the Voynich Manuscript

Given the widely held belief that the symbols in the Voynich Manuscript are some kind of code, or an unknown language, researchers, including this author, have sought to link any word or words to images on the basis that these words are likely to be labels.

Indeed, many of these words are labels.  The failure to read these image labels arises from the hammer and nails blinkered approach of the researcher, again: this author included.

If some pages are about astrology because they clearly show signs of the zodiac then those little asterisk style images must represent stars.  Right?  Wrong!  Many plants of the asteracea family are so named because of the resemblance of the flower heads to stars as conventionally portrayed in images of the middle ages and earlier.

To assume that the asterisks all represent stars is to run up (down?) a blind alley.  They may just as well indicate plants and/or their parts and their remedial purpose. 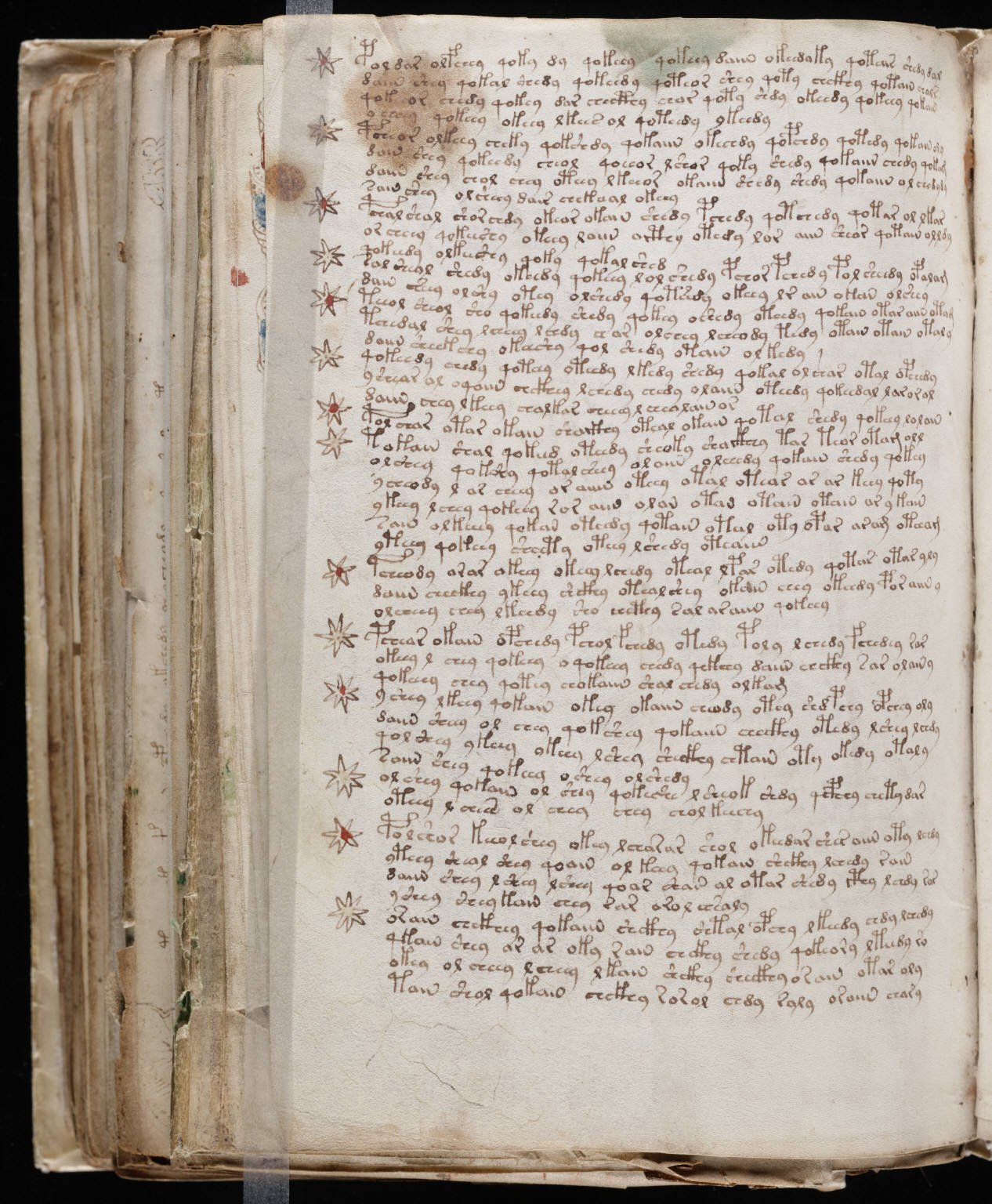 Based on modern notions of what constitutes accuracy in illustration, the plant images make no sense.  In the context of a medieval herbal the style of the images makes perfect sense.  There is a style of imagery known as hieratic.  This has nothing to do with the Egyptian hieratic script.  It is a reference to a system which sizes the elements of a picture in order of their importance to the artist or viewer.  If that is the system adopted in the Voynich Manuscript, then we may have another crib.

Suppose the 'hieratic' theory to be correct.  Where the head is very large in comparison to the other plants, it may well be that the image is of a plant whose flower or seed pod was the most important part for use in herbal medicine.  In the context of the Voynich Manuscript as a whole, the prominently illustrated parts of the plants may well be the parts of greatest importance for use in thermae or herbal baths.

Linneaus post-dates the VM, as does the 'correcting' of Latin by scholars, so any attempt to find classical Latin names of plants is somewhat doomed.  The same logic applies to the so-called stars.

Given that this section adheres to no known system of astrology aka fortune-telling, perhaps it serves some other purpose.  Perhaps it shows the best times and seasons for gathering and using wild herbs.  In which case, the 'stars' may be, in some cases medieval bullet points and in others merely flower doodles.

The baths in the Voynich Manuscript

The pages which clearly show women in water also show pipes connecting various baths.  It is not so long ago in Britain, when coal was king, that many house had no bathroom.  Water would be heated on the coal-fired oven and used to warm up the water in a tin bath.  The whole family would take turns to bathe: babies first, next toddlers, children, female youths, women, male youths, male adults.  The male adults went last because so many trades and labourings brought home quantities of filfthf dirt.  ( It was unusual in times past for employers to provide the menials with baths or showers free, gratis and for nothing.)

Back to the medieval public baths.  It would make good sense to address the sensibilities of ladies "of the better sort" by ensuring that they did not bathe downstream of the plebs.  The Voynich Manuscript appears to show such a bathing hierarchy.  It also clearly shows the waste being discharged to the ground, where it is of use only to wild creatures, being likely to cause deformities in humans. 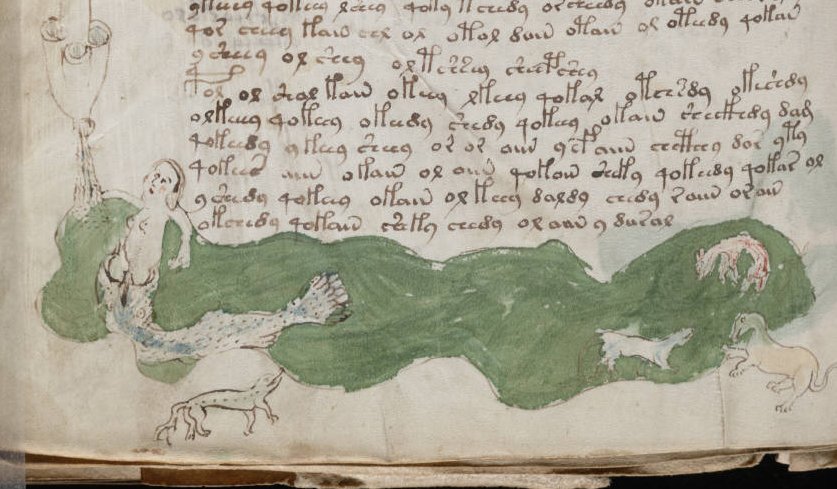 The relative frequencies of use of the symbols and 'words' do not match any known alphabet.  Small wonder: the symbols are mostly multi-function breviographs.  A Voynichese group of 3 'letters' may be a word of anything from 3 to 9 Roman letters long.  Also, words are often concatenated German style, but not to such an extreme as Rinderkennzeichnungs- und Rindfleischetikettierungsüberwachungsaufgabenübertragungsgeset.  That does not suggest that the writer was German.  He was more likely Italian or Spanish.

The VM word distributions found by researchers in 2013 constituted, for me, an excellent crib.  By copying in EVA1 font their word list (reproduced here at foot) I was able to test a handful of words for possible meaningful transcriptions.  The core concepts power, potency, potion etc. were more readily found thanks to the researches of the authors below, who deserve much credit.  (But as for blame, the buck stops here.)

We show that the Voynich manuscript presents a complex organization in the distribution of words that is compatible with those found in real language sequences. We are also able to extract some of the most significant semantic word-networks in the text. These results together with some previously known statistical features of the Voynich manuscript, give support to the presence of a genuine message inside the book.
Keywords and Co-Occurrence Patterns in the Voynich Manuscript: An Information-Theoretic Analysis
Marcelo A. Montemurro ,  Damián H. Zanette
https://doi.org/10.1371/journal.pone.0066344

The Voynich symbols clearly encode alphabetical n-grams in such a way as to cover the abbreviation of every word which the apothecary required within his herbal baths context.  It is a relatively small vocabulary.


The Keys to the Voynich Text

I am currently running some more computer analyses to compare the Voynich Ms symbol frequencies with Latin n-grams.  Using a corpus of over 400,000 words it takes some time for a program to run.  Only when the run is concluded can it be debugged.  Thus, comparing the VM symbols to various aspects of a corpus of Latin texts takes considerable time.  Please be patient.

I have decided to share my findings in the best spirit of science 2.0 so that through collaboration the whole manuscript may be accurately transcribed and translated.

Here is a rough sample of the decoding so far, using some plain letters which resemble the Voynich symbols  -

ai = ai or an depending on grammatical context.

V with a tail, shown here as CAP V = us
iV = nus
iiV = inus
iiiV = nius   except after a
aV = anus
aiV = ainus
aiiV = anius
aiiiV = anius    ? there are likely to be many alternate spelling in the Ms, as was common before the days of printing.

c = c or e depending on context.

Many symbols vary in their meaning according to whether they are used as initial, medial, final or isolate (i.e. as words).

8, EVA d appears to be used for S, ES, M, EM or B.  Context and position determines which use is intended.
8ani- 8ani-   = pertaining to healthy baths, i.e. medicinal (herbal) baths.

Practicum es con ilaque aris aferanius ...
Practicum is with this which help frequent ...

This is a practicum with whose frequent assistance ...

Next > a table of symbols and transcriptions. 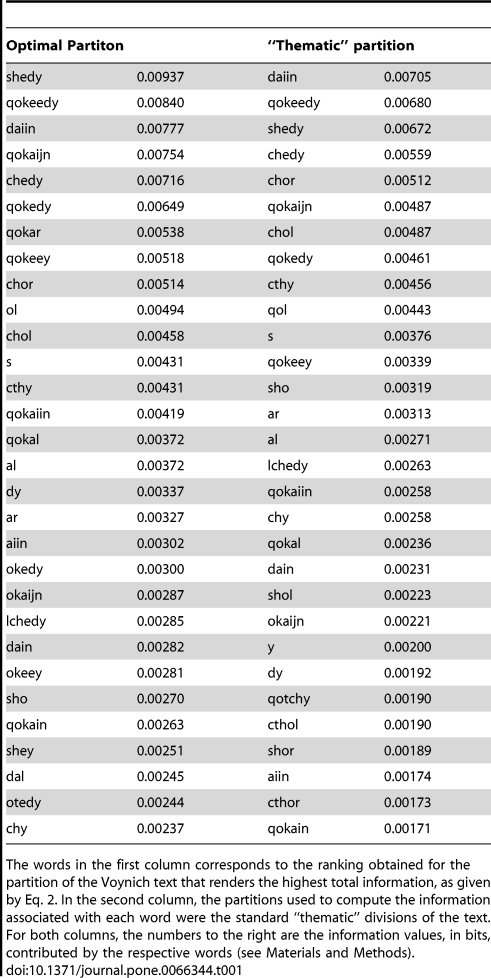