The Voynich manuscript, Beinebecke Library's MS 408 is a handwritten parchment codex of about 240 pages measuring 225 x 160 mm.   The manuscript is in an unreadable script.  Most of its pages are illustrated.  For nearly 100 years, not one person or group has managed to decode even a single word of it.

Before attempting to make any sense of the unique script of MS 408 it is necessary to confine the search for a solution into as small an area as possible.  There are similarities to marine navigation, where observations of the sun, stars or coastal details are made and lines plotted on a chart.  The plot shows a circle of error, an area of uncertainty within which the ship most probably lies.  The procedure may also be likened to the construction of a Venn diagram, a set of overlapping circles with the area of uncertainty confined by logic to the area where
all circles intersect.

What we would like to know is the 'who, what, where, when, why and how' of the Voynich manuscript.  Who made it?  What is it for?  Where was it made?  When was it made?  Why was it made?  How was it made?  At the intersection of those circles of doubt lies the area within which to search for cribs, levers with which to crack open the code.  Unfortunately, we cannot neatly isolate the circles: there is an interaction of factors.  Manuscripts were written for different markets at different eras in different countries.


Where Was The Voynich Manuscript Made?

There are very many reasons to assume that MS 408 was made in Europe.  Quite apart from all of the research that has gone before, my recent researches show similarities of style with known manuscripts from the European middle ages.  There is also a matter of presumed cost.  Quality manuscripts were produced mostly to order by professionals for the wealthy.  MS 408 appears to have been produced to a low quality, hence not for a wealthy client.  This implies a requirement for low cost raw materials.

In the relevant period of the middle ages, Britain was the major exporter of wool to Europe, especially to the cloth-makers of Flanders and Artois.  Far from being a 'dark' age, the medieval era was noted for its utilisation of every possible by-product of its products.  Sheep were kept in medieval times, not primarily for their meat or wool, but for their milk1.  Older sheep were sold for meat.    Sheep-gut is known to have been used for the strings of instruments such as harps.  Tallow was used for soap and candle-making.  Sheepskin with fleece was used for clothing.  Scraped skin was used for leather and parchment.  I suggest that leather and parchment would have been exported.

Like any commodity, wool would have its scarcities and gluts, with extremes of prices.  I suggest that a glut of wool would lead to more sheep being sold for meat, leading to a glut of by-products.  There may well have been times when parchment was relatively cheap in some parts of Europe.  Paper was little used until about 1500 in Britain.  By contrast, it was the preferred medium in the Islamic world, the Arabs having improved on the Chinese methods.


Why Was The Voynich Manuscript Created?

Whilst many manuscripts have no doubt been forged for the collector market, MS 408 simply does not fit the picture of products made for the bogus manuscripts market.  No part of it is in the style of anything known, so it cannot be a copy or a creative hybrid.

MS 408 may have been produced as a form of materia medica, a book used by physicians.  In the case of completely bogus physicians, the 'quack salvers', a bogus materia medica to impress prospective clients would be useful.   There is a very fine line between the 'genuine' and the 'bogus' in medieval medicine.  I suggest that, for all of the errors in the 'herbal' section, MS 408 was more probably intended as a genuine medical aid.  The medical practices of the 13th and 14th centuries included astronomy, herbal remedies and balneotherapy.  Diseases were thought to be due to imbalances of the 'four humours'.  It was also believed that the universe was made of four elements: earth, air, fire and water.  The illustrations in the Voynich manuscript would seem to tie it in with this purpose and period. 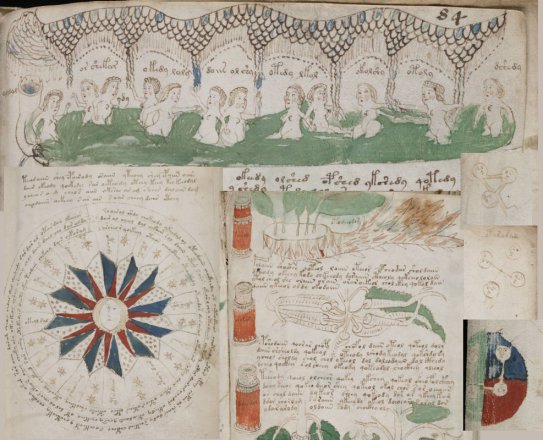 The bath image seems to show a canopy.  In the middle ages canopies were used mainly for privacy.  However, they were also used to trap the steam from hot water.  Contrary to modern myth, some rich people in the 'dark' ages had running hot water.  The practice of taking baths started to decline about 1500 when it was believed that some diseases were transmitted by shared baths.  In passing, there have been suggestions that the tube images in the roots section represent microscopes.  I think they are quite simply apothecary jars.


How Was The Voynich Manuscript Made?

A manuscript was normally produced by first marking faint lines by means of which the lines of writing could be kept straight.  The absence of those lines indicates an amateurishness about the Voynich manuscript.  The odd-looking plants and roots further suggest an amateur approach to the making of the manuscript.

If the purpose of the manuscript was to act as a sort of testimonial, a bogus book to convince illiterate clients of a quack physician's bona fides, then little writing skill would be needed.  Any random collection of words in a foreign-looking script would suffice for the purpose.  Instead, what we have is a reasonably neat script with a fairly regular use of a consistent set of symbols.  It is so consistent that statistical analysis suggests that the underlying language is a real one2.  It may have been written by more than one person3.

From examining the images available from the Beinecke collection of Yale Library, I suggest that the manuscript was created by two or more people working together.  The illustrations were almost certainly produced first, then the text added.  Some of the variation in quality of the text and drawing may be due to the differences in working by varying daylight and perhaps by candle-light.  Candle-light would be problematic due to its poor light and cost.

The manuscript seems, for the most part, to have been well planned.  There is little evidence of crowding, of characters being shrunk in width so as to fit into a too-small space.  In general the text is fairly neat.  There is some evidence of parts of the text and drawings being enhanced by a second application of ink.

In part 4 , at last I begin to discuss the strange script's probable underlying language: The Voynich Manuscript : Not So Mysterious ?