Patrick Lockerby
The Voynich Manuscript part 6 : The Other Babylon

When I first saw images from the Voynich manuscript, I was interested in the unusual script.  As a linguist, my first thoughts were about the possible underlying language.  As I have repeatedly stated since part #1 of this series, it is futile to try to decode an unknown script without first accumulating as much background information as possible.  All clues must be examined in order to create a sort of mental Venn diagram: a set of overlapping areas at the intersection of which the major clues to the puzzle are all found.

My first impression of the manuscript was of poor quality.  I retain that impression.  The parchment seems, from the scans, to be thicker than usual.  There is evidence of stitching, but no stitches.  In places, the script is placed to avoid what must be pre-existing flaws in the parchment.  Parchment is like any other material: when manufactured it is sorted and priced by grade.  The Voynich parchment seems to me, not having handled the real thing, to be of the lowest usable quality.

The low quality of the parchment and of the drawings suggests to me something of a personal notebook.  Perhaps the script is a personal shorthand.  One might expect a personal notebook to be on paper.  In western Europe, paper was not produced in bulk until after the introduction of printing.  France's oldest paper mill was built in 1545.  The oldest known paper mill was built in Baghdad, around 794.  After the bulk production of paper the production of parchment was reduced due to the lower demand, which inevitably increased its price.  The times when parchment was cheapest, I suggest, were times of a glut of sheep relative to demand for wool, or relative to human population.  That alone suggests a date range for the Voynich of between about 1300 and 1550.  For reasons given in previous articles, I would narrow that range to about 1350 to 1450.

I commenced my studies of the Voynich ms with no idea of the cultural influences which it might contain.  We are all heavily influenced by our cultural heritage.  According to the Sapir-Whorf hypothesis our mother tongue can influence our perceptions.  The same seems to be true in art: people brought up in a religion, or in a culture with a bias towards one religion, tend to use or see the symbolism of their culture in art.  In the Voynich ms there is only one clear and unambiguous portrayal of a crucifix.  There are, however, many details suggestive of an Islamic influence or origin.  I have already discussed some of these in The Baghdad Connection. 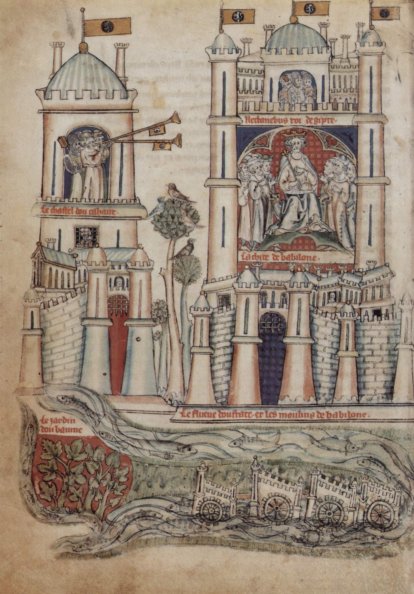 The image above, dating to the 13th century, has five labels: le chastel dou Cahaire, le jardin dou baume, Nectanibus roi Aegypte, le chite de babilone, le fleuve doufrate et les moulins de babilone.  The fish portrayed in the picture above resemble the pisces fish in the Voynich ms, f70v2.  It would be interesting to know whether or not these pictures accurately portray any species from the Tigris.

The image from A history of Alexander shows a considerable confusion of geography and nomenclature.  Nectanibus was an Egyptian king of myth and legend, said to be a magician.  The 'mills of Babylon' are almost certainly the mills of Baghdad.  It is interesting that they are portrayed as fortified water wheels.  I suggest that the whole picture represents Baghdad.  The clincher is the 'castle of cahaire'.  Surely this can only be the palace of al-Kahir in Baghdad.  Contemporary reports describe al-Kahar as a palace overlooking a garden of trees.  On one tree are mechanical birds of silver and gold which sing as the wind blows the tree.

"When the ambassadors entered the Palace of the Tree and gazed upon the Tree, their astonishment was great. For there they saw birds fashioned out of silver and whistling with every motion, while perched on a tree of silver weighing 500 dirhams."

Arrival of Byzantine ambassadors to the Abbasid capital in A.D. 917
Source: islamicceramics.ashmolean.org

The history of Alexander manuscript conflates Baghdad, Babylon and Egypt.  Why would a medieval writer link Egypt with Baghdad / Babylon?   The name Babylon has been assigned to a number of cities1 in Mesopotamia.  There is another Babylon outside of Mesopotamia: we know it today as Cairo.  The only part of Cairo today that still retains the name is Babylon Fortress.  This is the oldest original structure in Cairo.  The question now arises: are there any features in the Voynich manuscript suggestive of Egypt?  Yes, there are.

Long before the fleur-de-lys was adopted as a royal symbol by the French it was in use in ancient Egypt.  The symbol appears in ancient hieroglyphics and in the medieval Voynich manuscript.  It appears in f76v and in f85r2.  The other symbol in f76v may be a caduceus, a symbol which may have originated in Babylon. 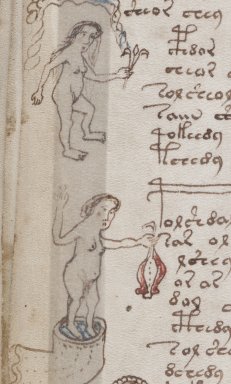 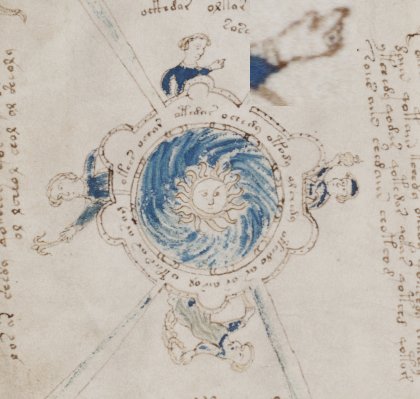 Detail of f85r2, with fleur-de-lys held by figure at left.  Upper figure shows a ring, right figure holds a pot, perhaps an albarello.  I suggest that the lower figure holds what may be a garland, or a skipping-rope or jump-rope.  The Egyptians apparently made these of vines for ceremonial purposes.

The most interesting feature of f85r2 is the image of the sun, apparently in a pool of water.  Could this be another Egyptian connection?  In 230 BCE Eratosthenes measured Earth's diameter.  He did this based on his knowledge that the sun shone directly into the well at Syene at noon of the summer solstice.  Could this be a representation of that well?

There is another, somewhat tentative, connection between the Voynich ms and Egypt.  On the 'rosettes' page there are what I take to be representations of stone walls, with the stones being of a specific shape.  In one panel, the stones are round.  I suggest this may indicate a reservoir or pond, rather than a defensive wall. 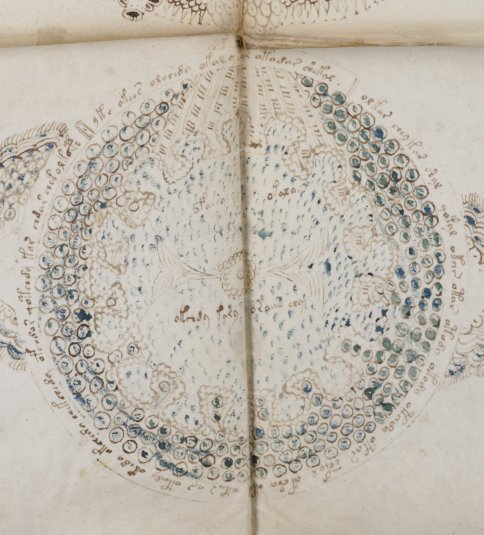 There is a central image, something like a boss or rosette, attached to the pond wall by two 'ropes' each side, via a 'fishtail' shape. 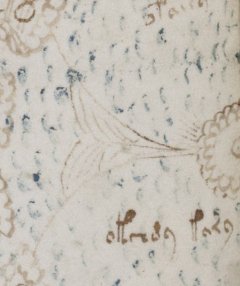 Khumaruyah, ruler of Egypt from about 883 - 896 had a problem sleeping.  It is said that he had a pool of mercury constructed with a bed of air-cushions secured by silk on which he could be rocked to sleep at night.  Of course, mercury is highly toxic, so we must take this as pure fantasy.  Or perhaps a mistranslation or false etymology.  The Latinised Greek for mercury is hydrargyrum, meaning fluid silver.  But if taken as hydra + gyrum then it means ring of water or perhaps whirling or swirling water.  Was the pool of Khumaruyah just a moat?  And is it portrayed in the Voynich manuscript?

Reference:
[1]  Stephanie Dalley, Babylon as a Name for Other Cities Including Nineveh University of Chicago pdf

Continued in The Voynich Manuscript Part 7 : Scripts&Swallowtails
The Chatter Box
More Articles All Articles
About