I am nearly ready to publish my results of a semantic (topical) analysis of the Voynich manuscript.  My programs have generated a wealth of output data which now needs to be written up and made available as a download.  The raw data files are meaningless without explanation, but the write-up would comprise too many word lists to be presentable as an ordinary article.  An article covering this semantic analysis is in preparation.  In the meantime, I can state that an in-depth analysis by topic shows that the VM is, to a high degree of certainty, written in a real language for the purpose of exposition of a number of related topics.  A random hotch-potch would distribute words across all folios and paragraphs / sentences with little variation: the VM has a word distribution which broadly matches a division into sections by topic.

Knowing that the VM is written in a real language does not determine the actual language.  The syntactic and semantic features in the VM narrow the field down, but there are other clues which help to narrow down the topics to a time and place.  It is difficult to prove where the VM was written: analysis of the parchment and inks might show where they were manufactured, but they could have been used elsewhere.  The most vital clues to the underlying language, including linguistic features, are those that most restrict the choices of era and geographical area relevant to the VM topics.

Who Wrote The VM?

I have absolutely no idea who wrote the VM.   I don't think it was written by any  author remembered in history, or even in the style of any known school.  The more I study the Voynich manuscript, the more I am convinced that its author was a gifted amateur.  Firstly, there is the matter of the parchment itself.   Whilst I have not been privileged to see the real thing, the scans clearly show the low quality of the material.  In many old parchments there are curls, splits and stitches which interfere with the legibility of the script.   There are stitch holes in the VM, but no stitches.   The author of the VM appears to have written around most of the defects in the parchment, showing that those particular defects were most probably present in the raw material.   Examples of such defects may be found on folios 15, 28, 30, 36, 37, 38, 66, 81, 82, 112 and 116.  I suggest that it is beyond coincidence that so few defects intrude into the text. 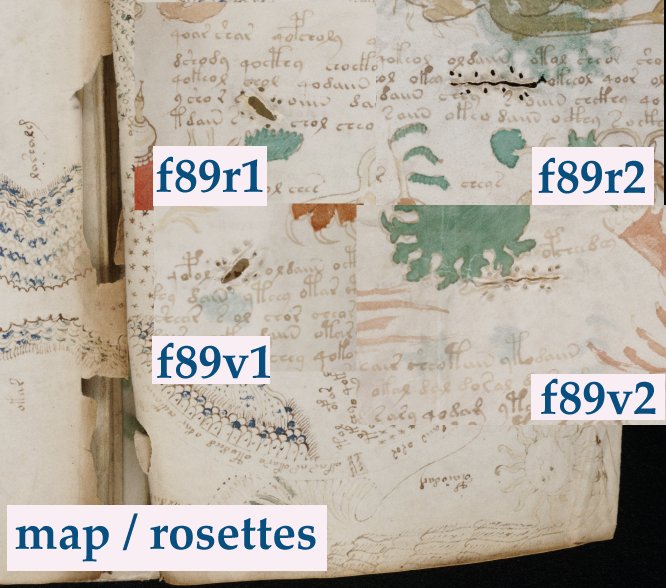 Other defects, such as the splits in the map (rosettes) folio tend to demonstrate the great age of the VM.  The two outer folio faces are darkened with age.  For the most part, the folios are only darkened at their edges.  However, the map folio shows the aging at the fold which one might expect: the outer edge of the fold being exposed to atmosphere more than any ordinary folio edge.  The cracking is, I suggest, more due to chemical contamination than to frequent folding of the map.

If the parchment was of poor quality before it was ever written on, it is entirely possible that it is the product of an amateur.  In the era of interest, most rural people slaughtered their own animals.  Given the medieval propensity to waste nothing, I suggest that 'home-made' parchment would not have been an unusual product.  A home-made parchment would be more likely to retain chemicals used in its production, hence more prone to damage from those chemicals.

The overall 'look and feel' of the VM suggests to me that the drawings are derived from descriptions and / or memory and were not directly copied from existing drawings.  Neither the script nor the drawings appear to follow any known school.  I suggest that the drawing and writing styles and details can narrow down the date range only to a few centuries.  The only drawing that suggests a narrow date range is the crossbow in the Saggitarius folio, as discussed in an earlier article.  The way that the crossbow is held suggests that the illustrator had seen at least one crossbow, but had probably not seen it in use.  It is plausible that a soldier returning home from the Battle of Crecy might have acquired such a crossbow as a souvenir.  The illustrator might have seen a crossbow as a static display item, but would not know exactly how it was used, hence the odd placing of the hands in the illustration.

I am reasonably convinced that one of the Voynich topics is Baghdad before it was sacked by the Mongols in 1258.  By 1350, the earliest plausible date for the VM, that would probably still be a topic of some notoriety in Europe, but more so in the areas still dominated by the Mongols.  From the European perspective, the sack of Baghdad was a tragedy.  From the Mongol perspective it would have been a great victory: a proof of the military superiority of the Mongols.  The most likely route of knowledge of old Baghdad into Europe would have been via the Mongolian Empire.

Although the Mongols destroyed the Hashshashin fortress at Alamut in 1256, and sacked Baghdad in 1258, the general area of the Mongol Empire was not an unmitigated war zone.  The Mongols were not the savage barbarians often depicted in histories: their empire, as with all empires, was completely dependent on trade and travel.

At its peak, the Mongol empire extended from the Pacific to the Mediterranean.  Trade and travel benefit from the use of a common language.  For over 150 years, the lingua franca of much of the known world, from eastern Europe to the Bering Strait, was Middle Mongolian.  I suggest that, given a time frame between 1350 to 1450,  Mongolian must be at least considered as one of the few plausible candidate languages for the VM.
The Chatter Box
More Articles All Articles
About