The most obviously strange feature of the Voynich manuscript is its unknown script.  Quite simply put, the script cannot plausibly be shown to be similar to, or derived from, any known script, ancient or modern.  As a linguist I am naturally intrigued by this.  As a I have repeatedly stated in this series of Voynich articles  , it is futile to try to read an unknown script in an unknown language without first finding as many clues to the underlying language as possible.  Seeking clues related to the herbal section of the MS I found a Baghdad connection.  This led me to wonder if the central panel on the 'rosettes' page might represent Baghdad.  That was the subject of my previous Voynich article.  There are more connections, I suggest.

As I have stated in my articles on A Science Of Human Language and A Brief History of the English Language, languages evolve.  All languages, whether written or spoken, absorb features from other languages in some proportion to geographical separation.  The most striking example of this is Japanese, which uses Chinese characters as part of its writing system but contained few European words until the beginning of the 20th century.

Knowledge behaves much like language in this respect.  During a period roughly between 900 and 1300 CE there was a 'knowledge gap' in most of Europe.  During that period many original Greek texts were lost, and knowledge of Greek faded.  Manuscripts were copied by hand.  Surviving manuscripts show that the copying was done carefully in the case of the Bible, less carefully in the case of secular documents.

For all of the care taken with the Bible, distortions were introduced.  In the case of other documents the distortions are glaringly obvious to modern researchers.  The specific case of the materia medica of Dioscorides, 40-90 CE, is a classic example.  The original work comprised five volumes.  The herbal section identified many plants by characteristics and by common names, including foreign names.  The original materia medica was not illustrated.

Over the years Dioscorides works were translated across many languages.  Illustrated versions appeared, the pictures at first being based on the translator's best guess as to the plant described.  Succeeding translators and copyists produced illustration based on a mixture of their own knowledge and beliefs, prior works and best guesses. Whilst the materia medica was a careful production in the Islamic world it had become degenerate and based on much fantasy in Western Europe. 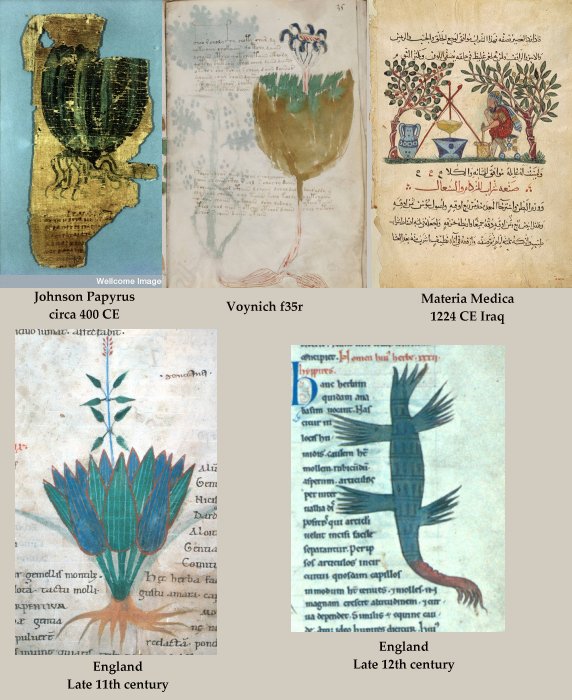 Manuscripts do not survive unless carefully stored and handled.  Down through the centuries many manuscripts have been subjected to careless storage and handling, re-use as palimpsests, or deliberate destruction by religious zealots, conquerors and even librarians1.

"The basis of the model is that manuscripts are like organisms," said John L. Cisne, a paleontologist and evolutionary biologist at Cornell University in Ithaca, New York. "A manuscript is going to behave just like an individual in a population. It can divide and reproduce or it can die."

Surviving variants of the materia medica range from the merely inaccurate to the wildly fanciful.  It should come as no surprise that the Voynich plants appear most odd to modern eyes. I suggest that it is a copy of a copy of a series of copies across a time-span of about 1200 years.  The knowledge and myth in Dioscorides materia medica spread from Greece across Europe.  It spread through the Islamic world and back to Europe via Spain, Italy and Constantinople.  Along that journey through time and space there were many losses and additions

Until it was sacked by Mongols in 1258, Baghdad was a widely renowned centre of learning, with a library and an observatory.  Contemporary reports of the number of public baths in medieval Baghdad vary from 2,000 to 10,000.  The only reasonable course is to accept that Baghdad was famous for having enough public baths to meet the needs of its population and visitors, especially during the Hajj season.

Travellers reports indicate that the baths had separate facilities or times for men and women.  In the baths, Christians had to show a cross and Jews a ring as a symbol of their dhimmi (non-islamic) status.  Elsewhere, Jews wore a specific kind of headgear, the pilleus cornutus.  Taken literally, that might seem to indicate a conical hat.  In fact, the hat was round with a central point or 'pimple' which varied in length with fashions. 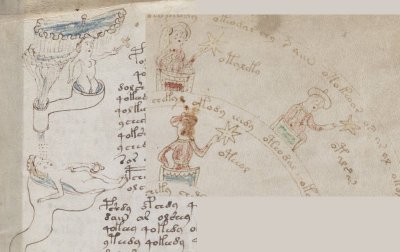 In the history of engineering, medieval Baghdad's most famous son was Al-Jazari, who wrote a treatise on mechanical engineering towards the end of the 12th century.  He was famous in his own lifetime as an ingenious hydraulic engineer.  In the regions of the Tigris and Euphrates the Romans had constructed canals for irrigation.  Under the caliphate of Baghdad these canals were extensively improved.  Waterwheels of various kinds were used to pump water up into aqueducts.  The two most unusual types of waterwheel were mounted directly in the river, one type in the central pier of a bridge, the other on ships moored in the river. 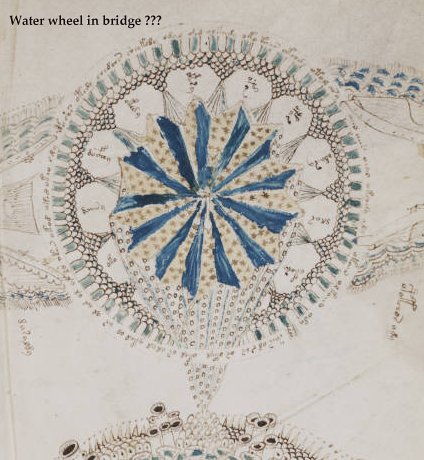 Al-Jaziri invented many automatic mechanisms for the control of water flow.  Most strikingly, he built a water-powered clock with moving astronomical/astrological components and animated mannequins and birds.

Al-Jazari's clocks all employed automata to mark the passage of the hours. These included birds that discharged pellets from their beaks onto cymblas , doors that opened to reveal the figures of humans, rotating Zodiac circles, the figures of musicians who struck drums or played trumpets and so on.

Source: History of Sciences in the Islamic World.

Compare that description with this Voynich page and details: 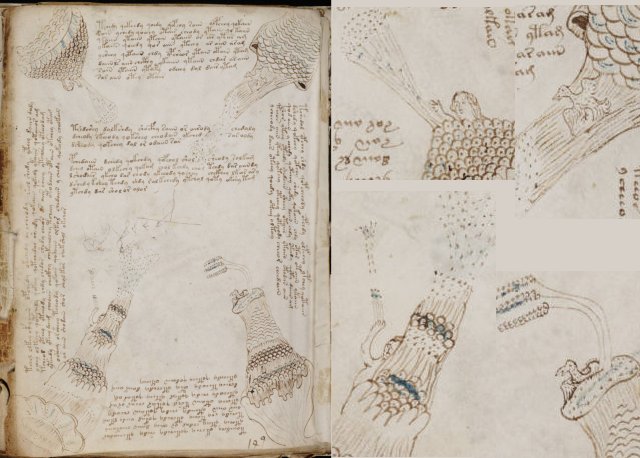 Do these Voynich features represent the clock of Al-Jaziri ?


Continued in The Voynich Manuscript part 6 : The Other Babylon


[1]  "In visiting the library of the monastery, in the month of May, 1844, I perceived in the middle of the great hall a large and wide basket full of old parchments; and the librarian, who was a man of information, told me that two heaps of papers like these, mouldered by time, had been already committed to the flames. What was my surprise to find amid this heap of papers a considerable number of sheets of a copy of the Old Testament in Greek, which seemed to me to be one of the most ancient that I had ever seen."
Constantin von Tischendorf, The Discovery Of The Sinaitic Manuscript
David Cox's Online Religious Library