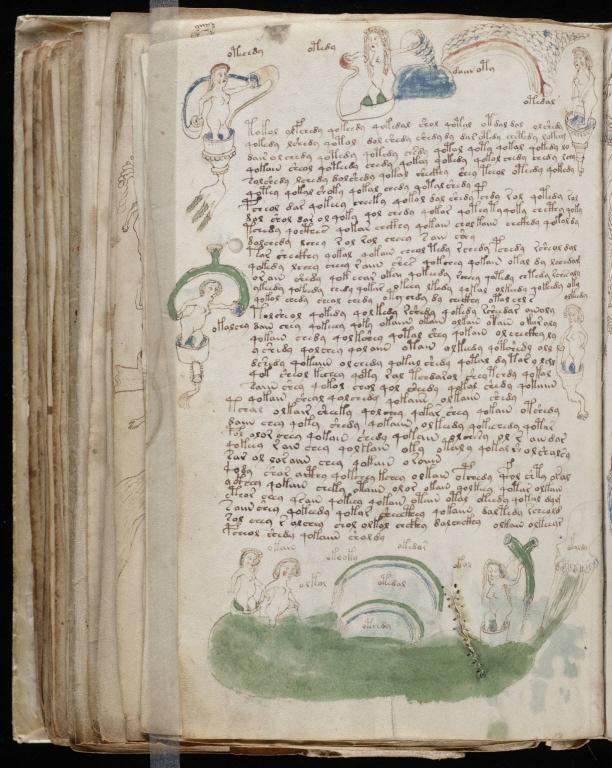 There are strings of what look like letters i and c in the Voynich Manuscript. If they are in reality i and c then they do not make sense. If we take it as a given that the writer of the VM intended his manuscript to make sense, then these glyphs must represent something else. But first, a few words about contextual dependency.

A symbol in a given text may not represent one, and only one thing all of the time, whether it represents a single letter or more than one letter. It is certain that the VM can not be transcribed completely by a one-for-one lookup table. It follows that, if there is a correspondence with a natural language such as Latin, at least some symbols must exhibit the property of contextual dependency.

Contextual dependency may be a literal 'with text' dependency. For example, a given symbol may stand for different letters depending on whether is is an initial, medial, final or isolate letter. Such literal dependency has been used in the case of Latin abbreviations for hundreds of years.

Another form of contextual dependency is grammatical dependency. For example, in the case of English, a document in which many or most verbs are in the past tense might indicate past tense with, say, the letter 'o'. Thus, 'went' would be written as 'goo', 'carried' as 'carryo' and so forth.

Finally, there is the matter of the topic of the document, or a section of it. Imagine, for example, a workshop manual for an automobile transcribed into a set of symbols, some of which are context-dependent. For the purpose of demonstration, only the initial letter is encoded, giving '&an'. What might this mean? In the context of an automobile manual, depending on which part of the vehicle is being described, the words 'van', 'fan', and (floor) 'pan' might be intended.

So, now back to the VM and those strings of 'letters'. It may well be that some of the symbols in the VM which look like vowels are context dependent. The symbol which resembles an 'i' without the dot shows frequency distributions similar to Latin if read as pen strokes which do not necessarily signify the letter 'i'.

If these "letters i" represent the main pen strokes of some consonents then the frequency of occurrence of 'i' is reduced, and the frequencies of occurence of other letters is increased. This tends to normalise the VM letter frequency distribution as compared with Latin.

I propose that the sequences transcibed into EVA as 'in', 'iin', and 'iiin' can be read as Latin letters according to the interpretations shown in the image below.

What about the other VM 'vowels'? The symbol which is transcribed in EVA as 'e' may represent other letters also. Further: 'o' may be a symbol for 'a vowel goes here'. But that is a matter for another article.

A footnote: these ideas are not taken out of thin air - they are derived from a great deal of computer code which I have written over the years to perform frequency analyses on the Voynich manuscript and a on great variety of ASCII text documents in many languages.