Something strange is going on.  Arctic watcher blogs are abuzz with talk about the behaviour of graphics which are supposed to show ice extent, area or volume.  many of these graphics seem to show that the Arctic melt has stopped.  Which it hasn't.

Historically, the main pack was always thick multi-year ice.  Ice would be lost at the edges in summer, and the new winter ice would be pressed into the main pack by the various drift motions.  As ice motion opened a new lead it would rapidly freeze over - even in summer.  As the ice expanded by cracking it actually made new ice.  Summer melt would nibble at the ice margins, but the losses would be made good in winter.

The Arctic has changed.  A warmer summer means more ice loss.  A warmer winter means less ice recovery.  A warming trend, however slight, leads to a downward trend in ice area and then to an albedo feedback effect.  The warming trend increases.  This is Arctic amplification.  As the downward trend in ice area continues, other feedbacks come in to play, accelerating the downward spiral.

For the first part of this melt season we have seen some very rapid ice losses.  Back in April there was a small but rapid gain in ice extent.  I discounted this as a blip.  My reasoning is this: the faster the ice grows, the faster it melts.  Ice growth in the margins is prone to melting from warm water intrusion into the margins.  Also, rapid growth means thin ice, and thin ice is prone to melting.

There have been some very strange wind patterns over most of the Arctic recently.  This has changed the overall behaviour of the main pack.  Normally, the Beaufort Gyre and the Transpolar Drift tighten up the central pack while at the same time exporting ice continually via the Fram Strait.

What is happening at the moment is that the pack is opening up and expanding from the central areas towards some parts of the coasts.  In the Fram Strait, the slowdown of the ice transport has led to a reduction of open water in the Greenland sea.  However, the ice is poised ready to flow freely as soon as the Transpolar Drift resumes.  Almost the entire path of the Transpolar Drift shows loose ice with a substantial amount of open water.  A strong Transpolar Drift would eject much of that ice through Fram Strait before other drifts closed up the pack. 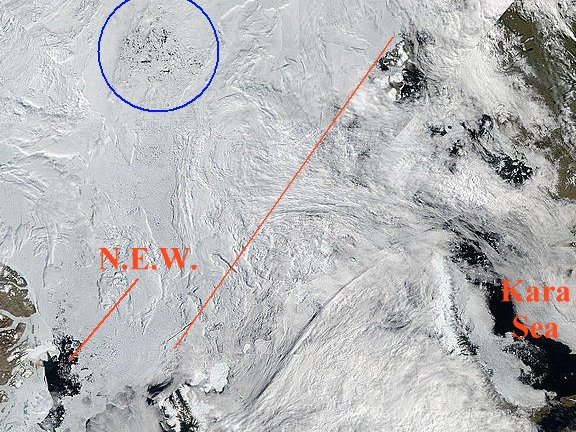 To the right of the diagonal red line is mostly open water.  Some graphics show extensive ice in that area.  I think that the masses of cloud, together with a small amount of ice is causing an appearance of pack ice where there is none.  We shall see whether I am right or wrong when the cloud disperses.

The area circled in blue, above, is shown in more detail below. 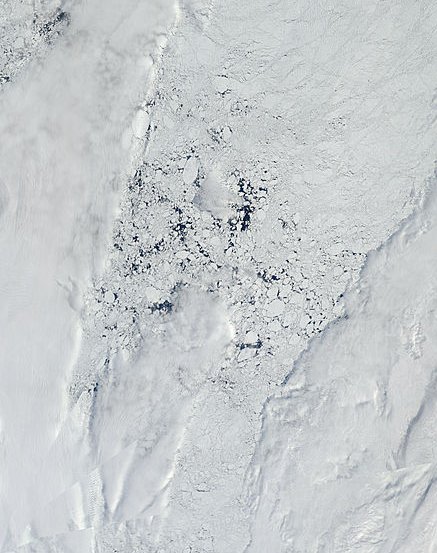 Loose pack near North Pole.  The pole is bottom left corner of image.
Image cropped.  I recommend a view of the full 250m resolution image:
http://rapidfire.sci.gsfc.nasa.gov/subsets/?subset=Arctic_r04c04.2010194...

A lower than normal amount of ice is flowing into the Kara Sea.  Within the Kara Sea the ice is very loose and is melting rapidly.  The North East Water polynya, adjacent to Flade Isblink used to be a true polynya when the perpetual ice extended fully down the coast of Greenland.  Now it is just a bay in the ice.

As I noted in Arctic Ice July 2010 - Update #1,
the Flade Isblink ice cap is the source of tabular icebergs which can, by becoming grounded, act as pins for sea ice in the Fram Strait.  The ice cap is thinning.  The shorefast ice is breaking up.  The NEW and the icebergs seem to have worked together: grounded icebergs would help to anchor the ice and the ice would resist melting by being thick and immobile.  That shorefast ice contained the NEW polynya.  The Flade Isblink, shorefast ice and NEW are all interconnected.  They seem to be vanishing. 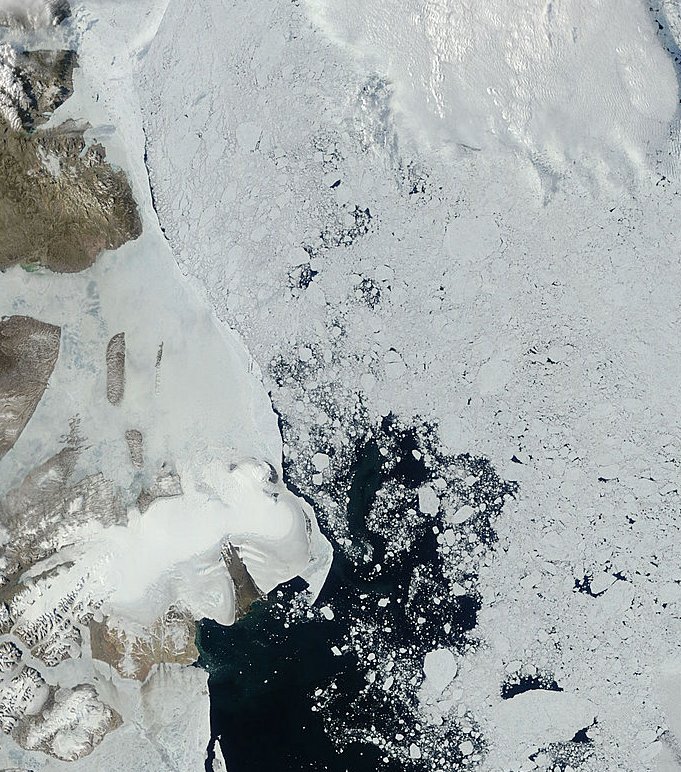 
Further south, the Greenland coast from Scoresbysund to the NEW has little shorefast ice.  The ice in Scoresbysund is dispersing and melting rapidly.  All along the shore the remaining ice is fairly loose.  It is hard to distinguish ice from ice smoke, haze and fog in many areas.  A warm current flows north in the area and the sea is quite warm.  Any ice along that coast will not likely last until winter. 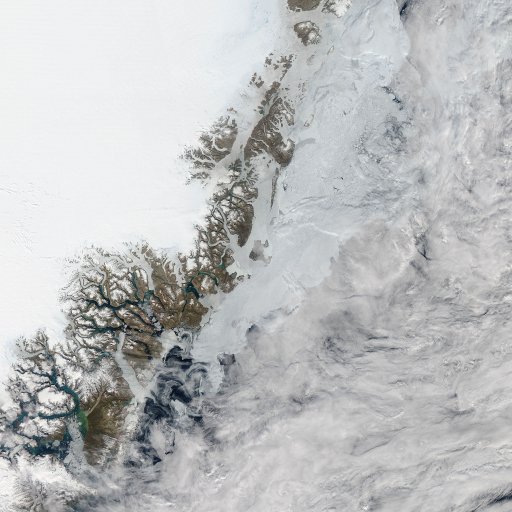 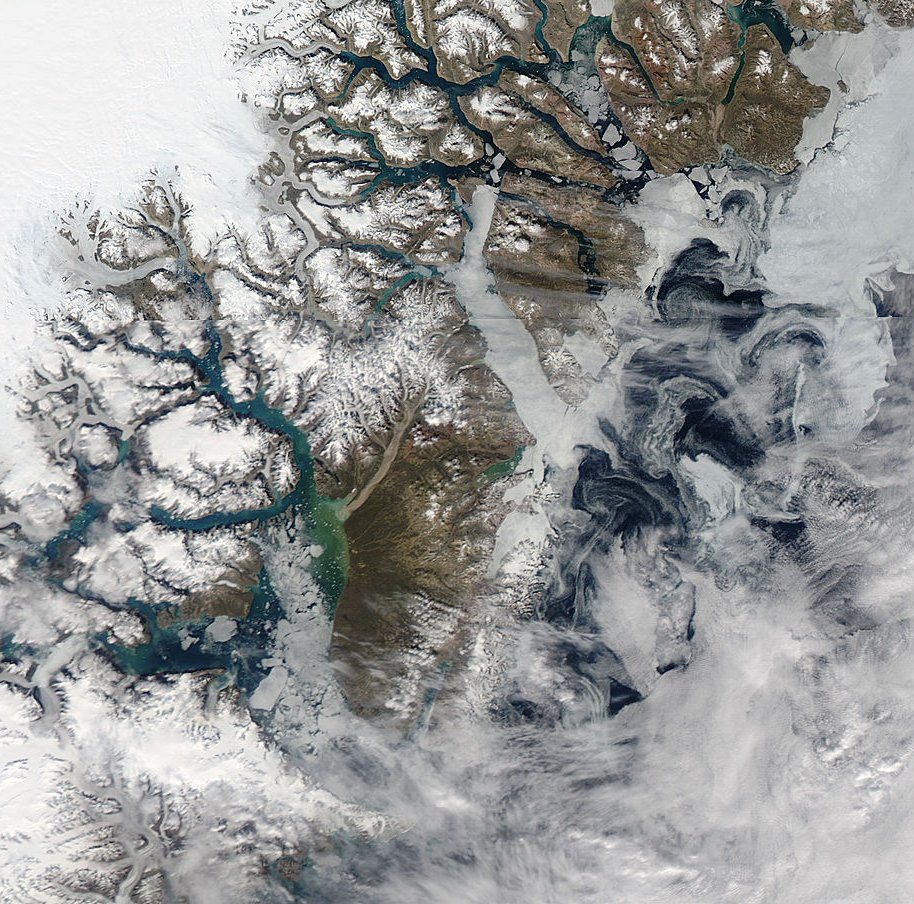 A local strong wind has temporarily halted export of Lincoln Sea ice into Nares Strait.  My estimate of low level wind direction is shown in the next image. 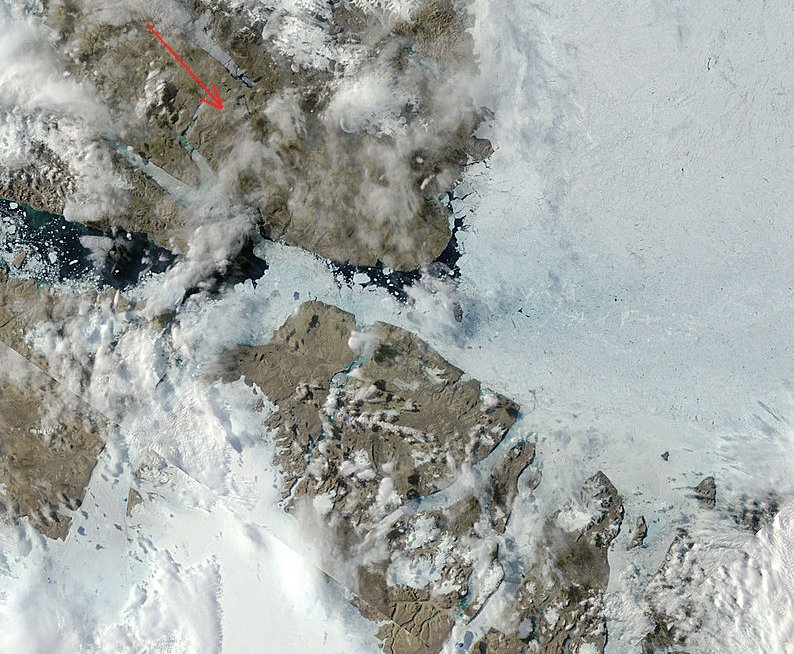 Note the meltwater pools in the Lincoln Sea.  This is an area of warm sea leading into a warm polynya.  A large amount of ice is primed to melt rapidly, especially if the flow into the Nares Strait resumes.

The ice bridge that blocked Viscount Melville Sound has now fully broken into floes.  There are many narrow passages and many islands tending to obstruct the flow of ice.  The rate of melting now depends on local cloud cover, currents and winds.  The water is warm enough for the ice to melt in situ, but it will melt faster if broken up by agitation and / or dispersed further. 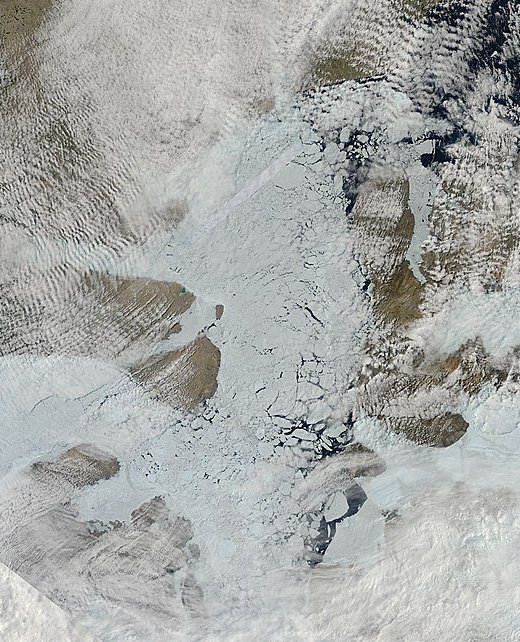 I will close this update with a few points.

1 - many data sets have no coverage for the region close to the pole.  The data is usually filled in by assuming that the pole is 100% ice covered.

2 - if the 'hole in the pole' closes that will be due to a general movement of ice offshore towards the pole.  The closing up of ice would make no great difference to total ice area, but for models which assume a 100% ice cover at the pole it will appear that area has shrunk rapidly.

There are many details that I haven't covered yet.  I hope to post another article soon.

You can find a list of my other Arctic reports and related articles in The ChatterBox Arctic Index.