An update and a bit of Arctic history.

Despite the extensive cloud cover over much of the Arctic it is possible to see some interesting patterns of behavior.

Around the Siberian side of the Arctic the ice has already retreated from shore or is in process of retreating.  The same goes for the Alaskan and Canadian shores as far as Prince Patrick Island.  Ice in the fjords and passages from the Beaufort Sea to Nares Strait is melting.

From Prince Patrick Island to the Nares Strait, ice is being pressed inshore.  Ice is also pressed inshore from Nares to Flade Isblink.  In the Nares Strait itself and the Lincoln Sea, winds continue to hold up the ice export.  These winds are local and are blowing from Ellesmere Island.  These are most likely katabatic winds, in which case they will promote melting.

Past the Petermann Glacier some ice in the Kane Basin is pressed inshore - presumably by the same katabatic wind - but other ice is still exported.

Judging from historic maps and images, the normal behavior of the Petermann ice tongue was the formation of a concave front at the fjord mouth.  Over recent years it has retreated.  Much of the tongue is now detached from the walls of the fjord.  Tidal forces will flex the tongue up and down: wind, currents and ice floe impacts will all exert at least a small lateral force on the tongue.  It will continue to thin from melting.

Judging by previous behavior and by the forces which will act on a more mobile ice tongue, I predict some dramatic calving this year.  The image below shows red lines where I expect the tongue to calve.  This is based on moraine and meltwater channels seen in other images from last year, and previous calving.  Please note that this is more of an educated guess than a scientific forecast.  Although there is a large fracture further upstream, it is quite old and may well be healed with solid ice.  That part of the glacier is in compression across the fjord, which will - I suggest - reduce the likelihood that the fracture will grow - until it has move a substantial distance such as to relieve the transverse compressive forces. 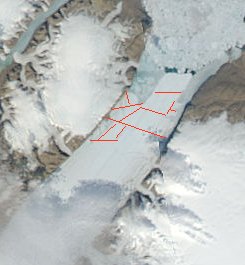 The whole Nares / Petermann / Lincoln Sea area is currently under cloud.  It will be interesting to watch the area when the cloud disperses.

The amount of ice lost through Fram Strait depends on a number of factors.  The two most important factors would seem to be fragmentation and gap width.  Fragmentation is important because floes which are so large that they can't pass through are going nowhere.  The gap width is important in that the smaller it is, the smaller floes have to be before they can pass through without jamming.  Back when the shorefast ice around Greenland and Svalbard was perennial ice, the passage between the two lots of shore ice and the pack was quite narrow.  The map below, published in 1939, shows permanent ice as white, and perennial pack as white with blue crazing. 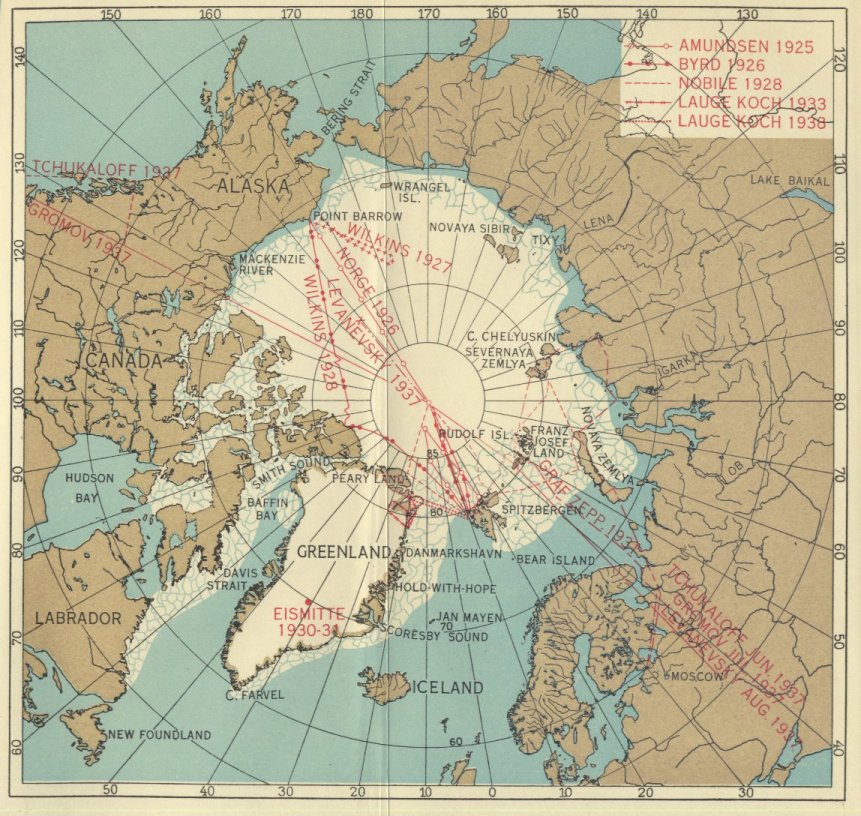 Arctic ice 1939
.
The map shows what was considered to be an average minimum ice extent in 1939.  Note that the edge of the shore ice and coastal pack ice extends south to Cape Farewell.  For the most part the east coast of Greenland was long considered unreachable by sea.  The area around Flade Isblink had been surveyed by sledge teams about 1918.  It was re-surveyed by air by Lauge Koch in 1938.  His maps show a larger Flade Isblink ice cap than today and extensive shorebound ice. 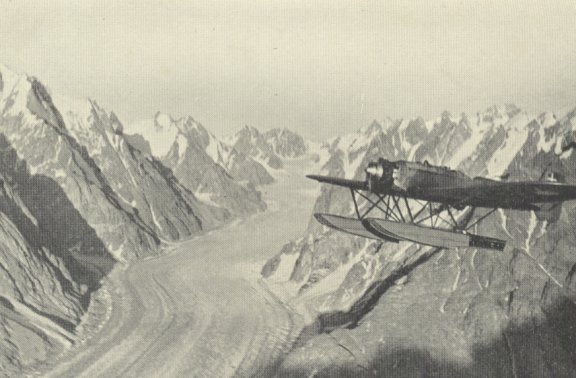 Lauge Koch flying over a glacier in N.E. Greenland

The reason we know so much about the state of the Arctic in the 1920s and 1930s is simple: science was politicized.  The nations carrying out these surveys were vying with each other for national prestige.  They were also interested in the military and strategic value of the Arctic.  Scientific ideals are fine, but they don't pay for scientific research.  Unfortunately, as today, politics and science don't mix too well.

For example, both Lauge Koch and Umberto Nobile were attacked in the press, but for different reasons - none true.  Koch was accused of making false claims about his maps; Nobile was accused of incompetence and cowardice.  Nobile's airship Italia had crashed on the ice in May 1928.  The icebreaker Krassin rescued the last of the 'red tent'1 survivors on July 12 1928. 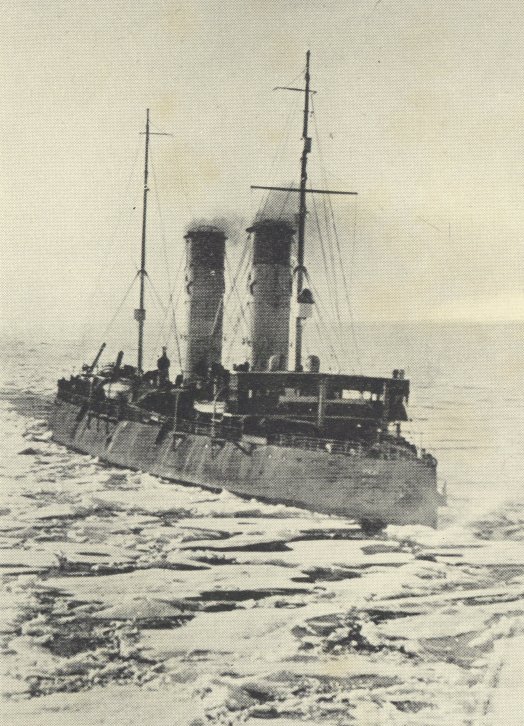 The map shows the North Eastern Route along the coast.  The map shows average ice edge.  The route was never continuous: icebreakers were needed to force a path through different areas in different years.  My article  Arctic Heroes #2 - North Pole 1 mentions icebreakers being stuck in the ice near the New Siberian Islands.  The reason they got stuck is that they had gone to the rescue of eight freighters which were trapped in the ice between The New Siberian Islands and the Kara Sea.  On looking at the lack of ice this summer in those areas, and the temperatures, it is hard to imagine so much ice there in 1937 as to trap three icebreakers and eight freighters. 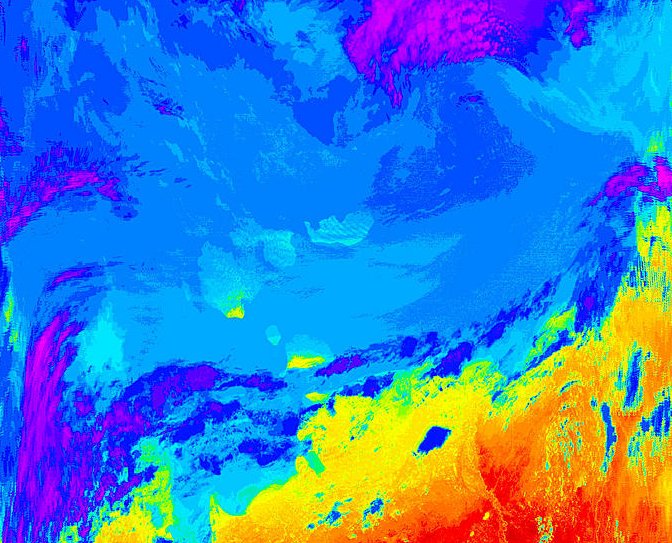 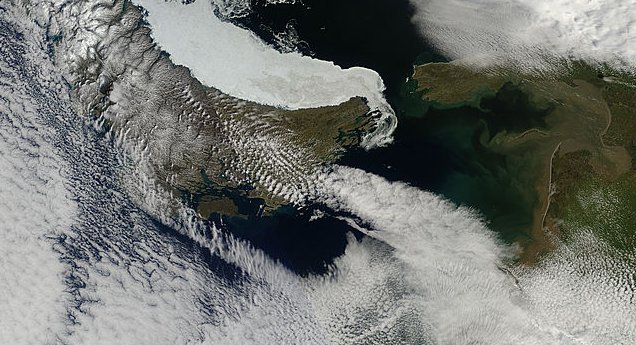 It is normal for a sea route to open either in the Kara Sea or on the other side of Novaya Zemlya in the Barents Sea.  Both routes are open sea this year: no ice-breakers required.  Note the algal blooms - a sign of relatively warm waters.

In the image above you can see thin lines along the shore which look white.  This is not ice.  As ice presses against the shore it builds up in thickness and 'bulldozes' materials into a line of spoil.  This line helps protect the coast from erosion when ice retreats.  When ice forms inside these natural sea walls it tends to last longer than floating ice of equal thickness.

The Arctic today is substantially different to the Arctic that was extensively explored in the 1920s and 1930s.  It was a lot colder then, with thicker ice.  Small ships could sometimes feel their way through the fringes of the pack, but larger vessels would often be trapped in the ice: even icebreakers.


Related articles can be found in The ChatterBox Arctic Index