The huge ice island which calved from Petermann Glacier on August 4th was stuck in the mouth of Petermann Fjord for quite some time.  As I had suggested, it did not get into Nares Strait as a single ice island.  It broke into two main parts: Petermann 2010-A and Petermann 2010-B

Petermann 2010-B moved at a fairly rapid rate along the strait.  There are many wind and surface current eddies, so it appeared to me to be likely that Petermann 2010-B would ground itself if it moved inshore enough.  I overlooked two factors which could work to keep the ice island away from the shores.  The first is the presence of substantial quantities of sea ice.  Any tendency of the ice island to move inshore would tend to compact the sea ice into an obstacle.  That compacted ice would tend to deflect the ice island towards mid channel.  The second factor is an underwater pressure effect.  When a floating body moves towards shallow water it tends to produce a pressure wave between itself and the bottom profile.  If the force tending to propel the floating body onto the shoal is too low, the pressure wave deflects the floating body horizontally and keeps it from running aground. 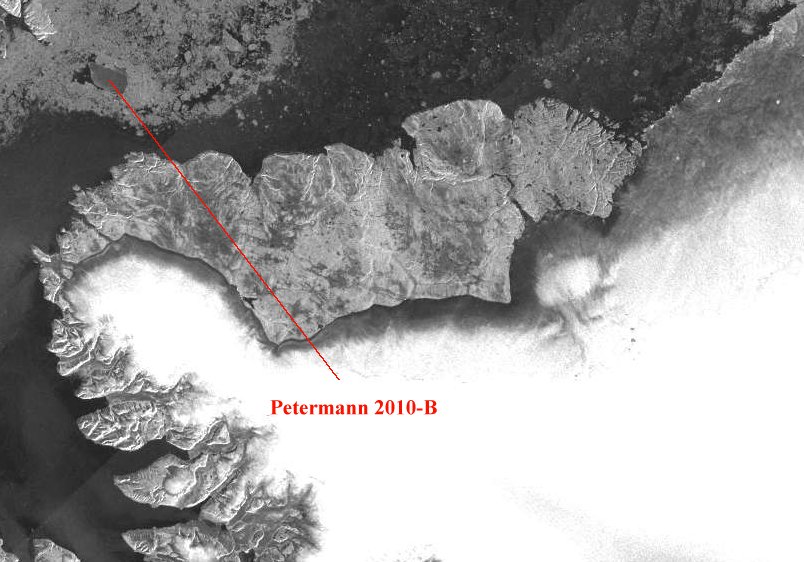 This ice island will run aground when a strong enough wind and current combination pushes it into a bay or a fjord estuary.  If sufficient sea ice compacts to seaward of it then the ice island will almost certainly stay put until next Spring.

This ice island has just moved away from the place by Joe Island where it has been trapped for some time.  It rotated anti-clockwise around Joe Island. 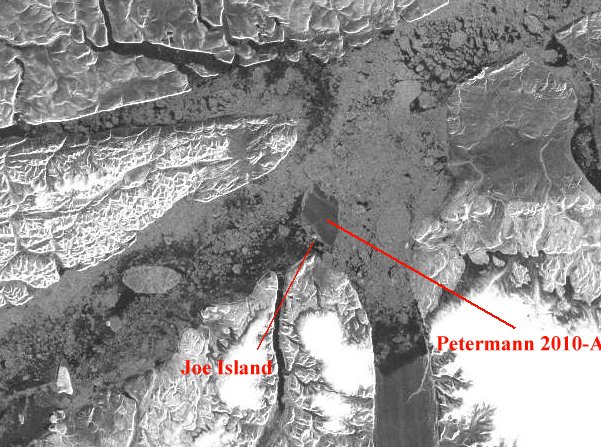 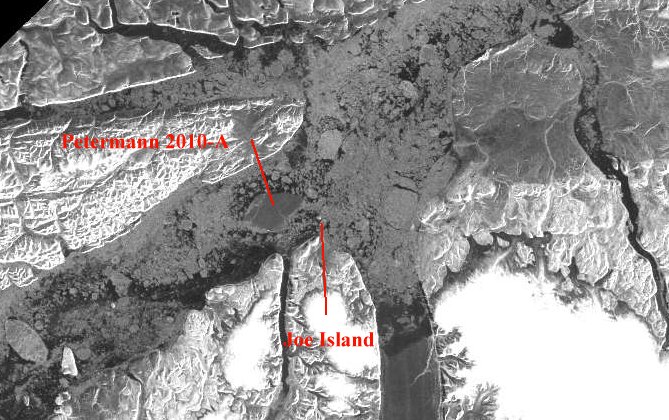 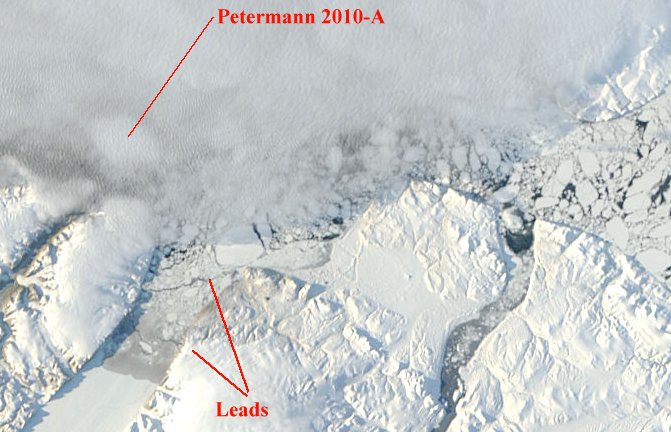 Petermann 2010-A was probably dislodged by a combination of factors.  A spring tide is only a few days away, so tides will already be significantly higher than average.  The flow of floes coming from Lincoln Sea will have provided a sequence of nudges tending to rotate the ice island.  The presence of leads across the newly frozen sea ice in Petermann Fjord is strongly suggestive of winds coming down the fjord.  All of these factors coming together seem to have been just enough to tip the balance and rotate the ice island clear of Joe Island.

If this section stays in the middle of Kennedy Channel and runs into Hans Island then the momentum will be enough to break the ice island into more sections.  Depending on the orientation, the impact - if it happens - could produce four separate sections.

Now that sea ice is forming in the fjord the chances of a further large calving before spring are becoming ever more remote.

Next year there will be 250 km2 more open water surface in Petermann Fjord than this year.  The glacier tongue is already being eroded from beneath by warm water penetration.  With 250 km2 of extra insolation and less ice, there appears to be a positive feedback available.

If, as I expect, the next large calving takes place in spring 2011 then there will be even more open water and even less glacier tongue to melt.  In a generally warming Arctic, the warm water flow from Nares Polynya into Petermann Fjord will be slightly warmer.  The open area formerly occupied by ice - perhaps 350 km2 by midsummer 2011 - will absorb more heat from the sun.

The glacier tongue is not well bonded to the fjord walls.  The broken ice melange at the margins appears to be more prone to melt.  The ice tongue will be exposed to warm water melting at its new calving front, its underside and its margins.

Given the combination of factors acting as positive feedbacks to further ice loss, the retreat of Petermann Glacier's ice tongue may well accelerate.  This year, the retreat has been about 25%.  I fully expect that by next summer that figure will have risen to 30% - 35%.

In the absence of global warming the ice tongue might retreat, say, 50% and then slow or reverse the trend.  From the trends we are currently seeing in the Arctic generally I do not expect to see a halt to this calving process.  It is more likely, I suggest, that the tongue will have lost 50% of its 2009 length by the end of 2012.  Positive feedbacks could cause retreat to the grounding line by about 2015 to 2016.