Once again my focus is on Nares Strait.  This time I want to show how glaciers can be affected indirectly by sea ice.

There are two major glaciers in the Nares Strait - Petermann and Humboldt.  Both are primed for calving.

Although glaciers are many times thicker than sea ice, sea ice can slow calving of some glaciers.  Ice is very strong in compression, so a sheet of fairly thick and consolidated sea ice can exert a backforce on a glacier sufficient to reduce the calving rate even if by only a small amount.  Sea ice can restrict the expansion of melange.  During the winter the sea ice exerts a back-pressure on the calved bergs, which freeze into a compact melange.  The melange in turn exerts more back-pressure on the glacier than would sea ice alone.  This is especially true in fjords and bays.

As I reported in Arctic Ice June 2010, in August 2007 Nares Strait was choked with ice. Note the Humboldt Glacier ice tongue at D.
Note also the white line of compressed bergs between C and E.

There was a lot of thick ice in the Kane Basin from winter.  In the next image you can see a white margin of bergs from 2009 around the Humboldt Glacier calving front. 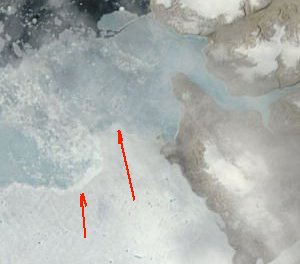 The next image shows just how much melange consisting mainly of bergs is released from having been pressed back by the sea ice. 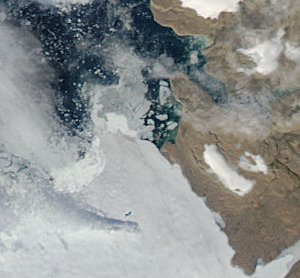 Now that the back-pressure has been released we should see some calving front retreat any time soon.


The Petermann ice tongue looks primed to lose a few fairly large floes any day now.  There are a lot of cracks showing at 250m resolution.  That means the cracks must be at least 250m wide. 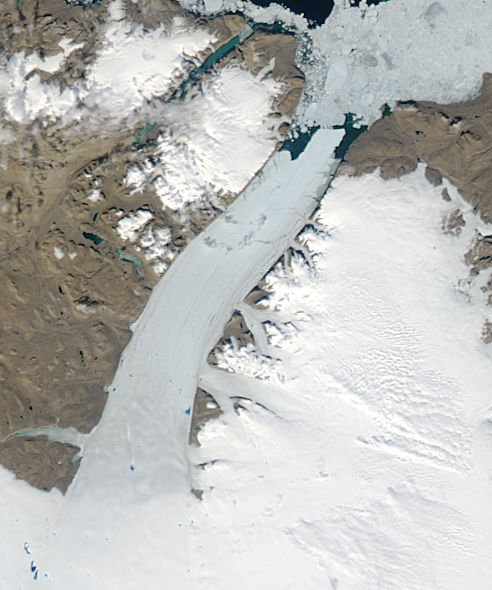 You may wish to compare the image above with my prediction in Arctic Ice July 2010 - Update #3.

It looks like a few small bergs- about 2 or 3 km across - are going to break off before the main tongue breaks up.  The bigger fracture back at the tributary glaciers needs a lot of back-pressure relieved before it can expand much.