The NSIDC will shortly be publishing its report for March 2011.  I expect the report to conclude that Arctic sea ice extent for February 2011 was the 'lowest in the satellite record'.  That would mean the 'lowest ever recorded in human history', since we have abundant data on historic ice extent.

A child finds it hard to understand how you can map ice extent without satellites, aircraft or at least balloons.

To accept such a child's-eye view of climate science is to reject the evidence of every fisherman, whaler, sealer, hunter, explorer, missionary, sea captain, geologist, cartographer or ordinary traveler who ever kept a journal; to reject the many thousands of scientific papers written by experts in their subjects even before the steam engine was invented; to reject the findings of modern science which lend further credence to these older eye-witness accounts and scientific studies.

From the wealth of information available from old written records and proxy measurements it is possible to reconstruct the arctic climate and the extent of sea and land ice going back beyond the first human footprint to be planted on our planet.

If we had satellites in 1900, our picture of the Arctic in August 1900 would be something like this: 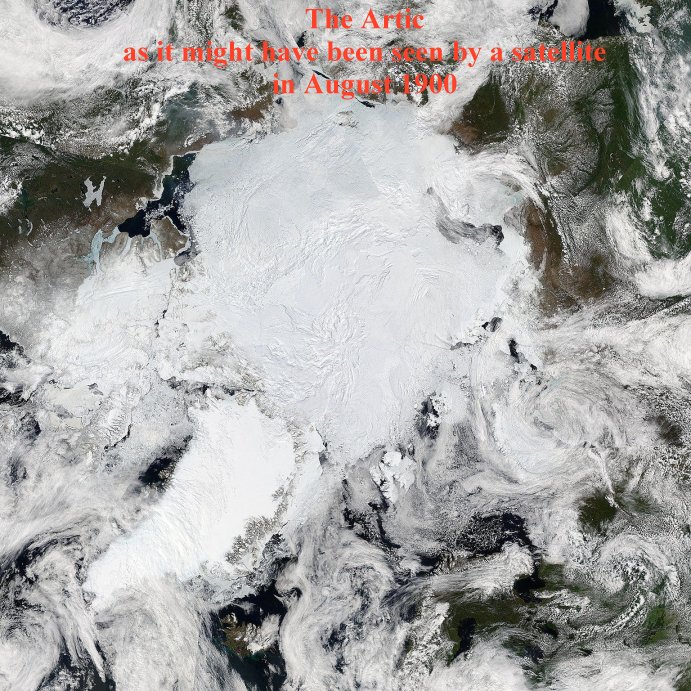 The Arctic in August 1900 - an approximate reconstruction.

In fact, the ice as shown in this image is far too little in extent for 1900.  The ice at that time would have covered the entire coasts of Greenland and Iceland.

Greenland was once unreachable by sea along most of its coasts.  From the Lincoln Sea around Greenland's east coast and up the west coast was the Great Ice Barrier, a vast field of ice sheets and floes through which no ship could pass.

For much of human history the most skilled explorers of the Arctic were the Inuit.  Even the Inuit, highly skilled in Arctic travel, barely explored or settled the east coast of Greenland.

The east coast of Greenland was unknown territory for the white man before the 1900 century. Only occasionally it was visited in the 1900 century.
Ammassalik was discovered by the dane Gustav Holm on a mapping expedition when 4 inuit Umiaqs rounded the southern tip and went northwards along the east coast of Greenland in 1884. Ammassalik was then the biggest community of East Greenland with some over four hundred inhabitants. They were extremely surprised to see foreign "Umiaqs" arriving in the bay.

The main reason for that so few people ever have visited this land (east coast) is that 90% of the pack ice in the north pole basin have its outlet to the open sea here. This means that there is a hundreds of miles wide barrier of continuos slowly southwards drifting multi-year pack ice present here near all year around. The ice barrier stretches along all of Greenlands east coast except for 2-3 months in late summer and autumn when only the southeastern part is ice free.
The barrier have for all times before 1800 century prevented any ship to reach the coast of North East Greenland.

Data from the ages of sail and steam

There is a wealth of accurate data to be had from ships logs, from which we can reconstruct past climates and ice extents.  Efforts are under way to extract the data from the many thousands of records left by the Royal Navy and the East India Company.  No doubt other nations will provide climate scientists with access to old log books when the great value of this source of climate data becomes more widely known.

As more and more of this valuable data is incorporated into the climate record, I hope to hear less and less of the 'no data before satellites' nonsense.  Please note: a hope is not necessarily a legitimate expectation!

As my regular readers will already know: I constantly research old records to find out as much as possible about historic Arctic sea ice seasonal extent.  From those researches it is obvious to me that the Arctic has long since entered a period of rapid decline in sea ice extent and rising temperatures.

The seasonal ice extent this year - 2011 - continues to track well below any level recorded throughout written human history.