The melt season of 2010 ended with a low extent and with little ice older than two years. There are strong indications that the winter of 2010 - 2011 did not compact and thicken the sea ice as much as would normally be expected.

It appears to me that the 2011 melt season began with weaker, thinner, less consolidated ice than at any time in recorded history.  Where the slabbing and compaction has been least, the newest ice between the older floes is likely to melt soon.

I suggest that by mid April the sea ice will be in a similar condition to that of late August 2010.  In plain terms, the 2011 melt season will soon continue more or less where the 2010 melt season left off.

Many areas of the Arctic are melting, advecting and re-freezing.  This superimposes local variation noise on signals of ice extent.  I call this 'the Arctic ice jitters'.

Sea ice extent in February and March tends to be quite variable, because ice near the edge is thin and often quite dispersed. The thin ice is highly sensitive to weather, moving or melting quickly in response to changing winds and temperatures, and it often oscillates near the maximum extent for several days or weeks, as it has done this year.
Source: NSIDC report March 23, 2011

Note that this sea ice will appear in extent numbers but will have no impact whatsoever on the mass of ice in the main polar sea-ice cap.


The tale of the tape

The unusual behaviour of Arctic ice this year is shown at a glance by the Cryosphere Today's 'tale of the tape':  the 2011 portion of the graph could not have been predicted from previous data.  The 2011 plot of anomalies is itself anomalous.

The graph as a whole shows a clear negative anomaly trend since 1979.

The animation below of the sea ice concentration chart from Cryosphere Today shows changes in ice distribution since December 31 2010, in 5 day steps.

The chart of sea ice concentration should be read in conjunction with the PIPS ice displacement chart animation and the current ice thickness chart below.

The red, yellow and green areas in the ice thickness chart are the last vestiges of sea ice thicker than 2.75 meters in the entire Arctic.  They consist of heavily fragmented ice much of which is being advected through the Fram Strait.  When the Nares Strait and NWP ice breaks up, that thick ice will be highly susceptible to advection through those passages.

The 3 to 5 thousand years old ice shelves which once extended north of Ellesmere island are now down to the last fragments.  If we discount those fragments there is little ice in the entire Arctic older than 5 years.  It bears constant repeating that the bulk of Arctic ice 2011 is 2 years old or less.

Recent ice advection patterns; warm water advances into the Arctic from the Atlantic; ice distribution patterns: all of these things show that conditions continue to be advantageous for export of ice through Fram Strait.  Nares Strait is currently blocked by relatively weak ice.  As soon as the ice in Nares Strait breaks up, a continuation of current trends will be advantageous for the export of substantial volumes of the remaining older ice through that channel, supplementing the export through Fram Strait.

We are now - March 26 - within the time frame of my prediction for the breakup of the Nares Strait ice bridge.  Some of the area is under cloud as I write these words, but there are hints of open water visible through the clouds.  Radar images show a melange of last year's floes and young ice.  This melange is so weak that a few cloudless days and / or a strong wind towards Baffin Bay will cause a rapid breakup of the ice bridge.  I expect to see ice being advected through Nares Strait about the 14th April. 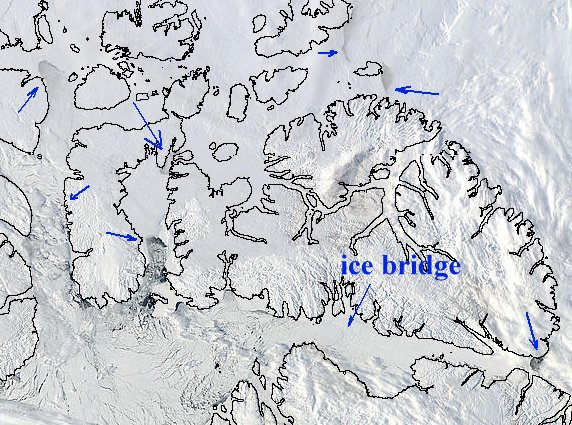 The arrows show 'places of interest' where ice is breaking up and being replaced by open water.  The ice bridge is still intact, but its breakup is imminent. 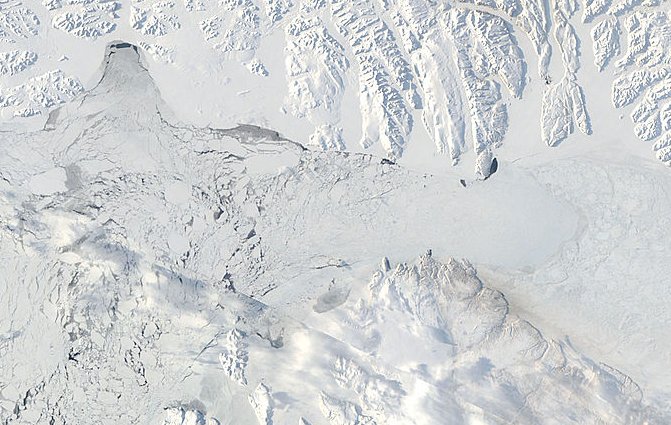 The decline in ice volume since 1979 is dramatically illustrated by this PIOMAS graph. 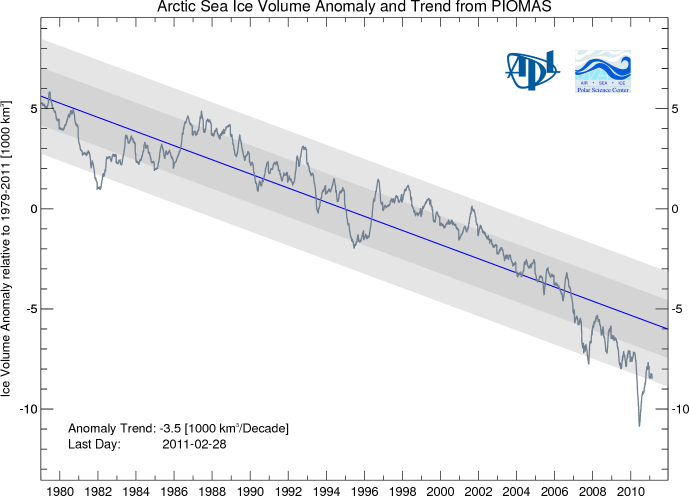 The importance of ice volume is that it reflects the ability of the Arctic sea ice cap to absorb heat without melting away entirely.  Thicker ice can survive summer melting longer than thinner ice.  Thicker ice has greater momentum by which massive floes slide over and under each other, slide over ice rubble, create massive compression ridges and generally make the ice more robust.  Thinner ice can melt away entirely, can fragment instead of slabbing.

An ice cap which is rejecting heat all winter can absorb the same amount of heat during summer without raising its temperature to the melting point.  Ice lost by ablation is readily replaced by the freezing of rain, snow and meltwater.  A robust ice cap, due to its thermal capacity, cannot melt away in summer.

The ice cap we see today is not robust.

The melt season of 2010 is under way with less volume than former melt seasons.

Of that lesser volume, about 90% appears to be under 2.75 meters thick.

Much of the ice is less than 1 year old.

The Arctic's dynamic system seems primed to advect large quantities of ice out of the main ice cap area.

The Beaufort Gyre and Transpolar Drift have not yet appeared as stable patterns.  The instabilities in the ice drift patterns broadly favor ice export via Fram Strait.

Collapse of the Nares ice bridge is imminent.

These forecasts represent what I expect to see based on a continuation of general trends.

Dates given should be taken as plus or minus 3 days.

The Nares ice bridge will be fragmented, and the ice in Kane Basin will be melting out by April 7th.

Ice from Lincoln Sea will be advecting through Nares Strait by April 14th.

By April 30th, ice extent graphs will show a strong downward trend similar to that of May - June 2010.

Since I posted the image of Nares ice bridge the breakup has advanced more.  Please compare the image above to the one below. 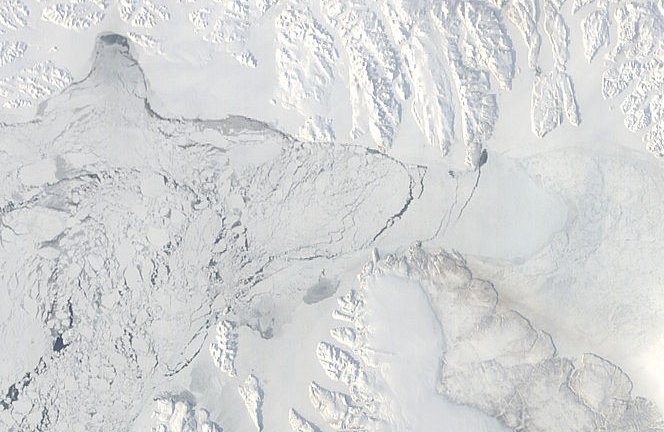