This year looks set to be yet another year of extreme melting of Arctic sea ice.  The majority of ice is first year ice.  Previously-normal conditions ensured that young ice would enter the Beaufort Gyre and be trapped there for some years, growing in strength and thickness. This tended to compensate for the greater or lesser annual loss of older ice through Fram Strait.  The loss through Fram Strait was formerly reduced somewhat by the obstructive effects of the Odden ice bridge.  As I have noted before, the Odden has not formed since 1997 - a fact which alone indicates that the Arctic climate is changing.  The contrarian blog co2science.org cherry picks a few facts from Comiso et al 2001 and states: "The fact that the Odden ice tongue has persisted, virtually unchanged in the mean during the past 20-years, is in direct contrast with climate alarmist predictions ...".  The Odden has not persisted.  The most recent scientific observation which I can find, published in 2002, states quite clearly that the Odden "used to form".

One cause of the decline in Greenland Sea convection has been assumed to be global warming, causing an increase in air temperature and thus a reduction in thermal convection; and a reduction in the occurrence and growth of frazil-pancake ice in the Odden ice tongue, which used to form over the region every winter and produce a positive salt flux through ice formation followed by advection ...

Further confirmation of extremely unusual ice conditions comes from Russia.  The SP-40 drifting research station which was established on October 1, 2012 at 85o north, 143o east is being abandoned due to premature breakup of the ice.  Over at Neven's Arctic Sea Ice Blog which features the SP-40 story in some depth, the A-Team, source of the image below, reports that the floe has broken into six pieces. 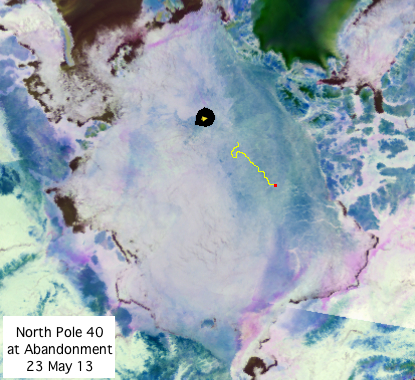 "This is not the first time that Russia, which opened its first SP-1 station in 1937, has made an early evacuation in the Arctic. In late April 2012, the previous research station, SP-39, was moved to another ice floe because its original one was breaking up, and in May 2010, the Rossiya nuclear-powered icebreaker evacuated floating station SP-37."
Source: arctic.ru news

SP-40 survived for nine months, most of those months being Arctic winter.  The first such station, North Pole 1, also survived for about nine months, but most of those months were Arctic summer. It eventually drifted out of the Arctic through Fram Strait.  The floe began to break up from the then normal cause of being driven south into warmer air and warmer water.  SP-40, as can be seen from the drift chart above, has remained in an area which was formerly filled with older, thicker and stronger ice.  The last remaining older ice lies north of Greenland and the various Canadian islands.  If conditions are conducive to the breakup of a floe which was selected for its size and thickness then conditions must be conducive to the rapid disappearance of much of the first year ice.

The image above also shows open water in Nares Strait.  The ice bridge did not form at the Baffin Bay end of the strait: the ice is daily receding along the strait.  The image also shows many leads and polynas which, together with the shortage of older, stronger ice indicate the fragility of the current state of Arctic sea ice.

If we see conditions similar to those of early June 2012, when the ice extent began to decline very rapidly, we may well see the greatest extent of Arctic open water since observations began back in the time of Queen Elizabeth the first.  George Best would have been astounded to see the downward trend in Arctic sea ice volume.