Most of the fires in Siberia seem to have been put out or burned out.  Meanwhile, the fires near Moscow continue to burn and there are more fires in Alaska.  I have made a mosaic composite showing the fires at the time of writing.  I have enhanced some of the red fire markers where they were faint in the MODIS originals.  Please note that the size of a red blob does not equate to the size of the fire. 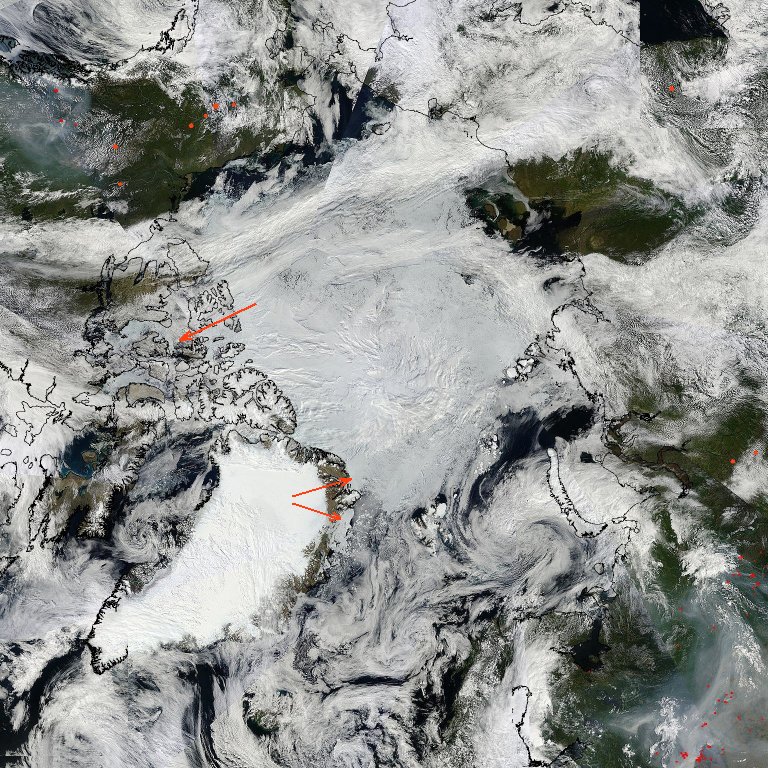 There are three red arrows pointing to the North West Passage and two sheets of shorebound ice.  In a comment to Arctic Ice August 2010, Espen asked:

Looking through many modis 250m images, I have difficulties finding areas
of not broken up arctic ice, do we have any figures (%) of not broken
up ice in relation to ice extent, and how is not broken up ice defined?

I don't think there is any sort of standard definition.  What I have done is to wade through many recent MODIS images to see if I can find any areas of continuous and consolidated ice.  One would expect to find substantial areas of continuous ice along the north coasts of the Canadian archipelago and Greenland.  Although there is dense ice in those regions, it does not appear to be consolidated.

The only ice of substantial area which shows no signs of being merely pressed together or of showing interstitial open water lies adjacent to Flade Isblink.  Those sheets of shorebound ice are arrowed in the mosaic above.  They are not especially thick, but do contain some older ice islands and tabular bergs.

Even more startling than the lack of sheets of ice is the roughly circular floe sitting near the middle of the North West Passage - arrowed in the above image.  It shows up nicely in the following animation - as does open water in the NWP.  The NWP looks to be about 50% ice free, which makes it just about navigable.

Why do I describe a single floe as 'startling'?

As older ice disappears we are no longer seeing vast sheets of ice in summer - we are seeing loose aggregates of separate floes.  In a loose aggregate, the smaller the particle size, the greater the mobility.  The SST graphs from polar.ncep.noaa.gov seem to track ice extent nicely.  The purple areas in the animation show a mobility which we are seeing in the pack.  I am grateful to Neven for the first frames in this animation - I added the last one to show warm water penetration.  You can see how warm Pacific water is entering through the Bering Strait, left.  You can also see warmer water entering from the Atlantic.  Given enough warm air and warm water, melt proceeds rapidly even in the absence of direct sunshine.

I keep reiterating the simple fact that smaller floes melt faster.  This point has been made in NSIDC's August report:

... smaller floes melt more easily than consolidated ice. This behavior is becoming more typical of the ice pack as the ice thins.

Old ice is vanishing.  This means that if the winter freeze produces an increase in ice extent it does so by producing new ice.  If you take the winter maximum extent and subtract the previous minimum, what you have left is the extent of first year ice.  First year ice is the fastest to disappear in summer.

Even if this winter were to produce the greatest extent in the satellite record - which is doubtful - the new ice would likely all be gone by August 01 2011.

This past winter's negative phase of the Arctic Oscillation transported old ice (four, five, and more years old) from an area north of the Canadian Archipelago. The ice was flushed southwards and westward into the Beaufort and Chukchi seas, as noted in our April post. Ice age data show that back in the 1970s and 1980s, old ice drifting into the Beaufort Sea would generally survive the summer melt season. However, the old, thick ice that moved into this region is now beginning to melt out, which could further deplete the Arctic’s remaining store of old, thick ice. The loss of thick ice has been implicated as a major cause of the very low September sea ice minima observed in recent years.

Cool, stormy weather this July has made it less likely that the upcoming 2010 sea ice minimum will set a new record. It would take a very unusual set of conditions in August to create a new record low.

What would constitute "unusual conditions"?  Have a look at that floe again.  It is about 35km. diameter. 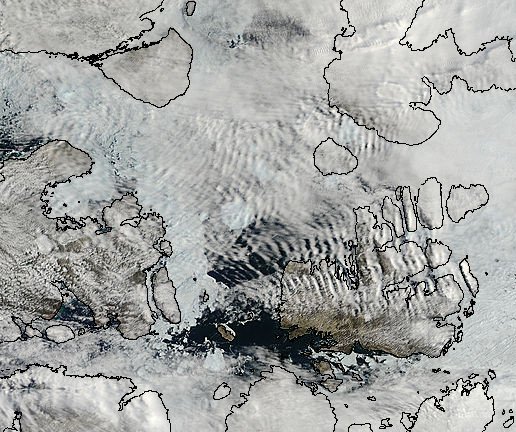 I invite my readers to find a floe bigger than that one anywhere in the main ice pack.  From my own searches I have not found such a floe.  If the biggest individual floe in the entire Arctic is indeed only 35km. diameter then the ice is more mobile today than in any Arctic records.

Does that constitute "unusual conditions"?