In this current article I am going to show what is happening in the Nares Strait and Lincoln Sea area North of Greenland.  The ice in that area is showing signs of very early melting and dispersion.

The Arctic Ocean is the world's cooler.  If it switches from mainly reflective ice to mainly absorptive water it will be as if the human race has switched off the cooling fan and switched on the room heater.  In the height of Summer, that is not a rational thing to do.

Deny what you will, the Arctic is not behaving normally.  A few paragraphs being quoted out of context are doing the rounds of the deniersphere:

"It will without doubt have come to your Lordship's knowledge that a considerable change of climate, inexplicable at present to us, must have taken place in the Circumpolar Regions, by which the severity of the cold that has for centuries past enclosed the seas in the high northern latitudes in an impenetrable barrier of ice has been during the last two years, greatly abated.

[it] affords ample proof that new sources of warmth have been opened and give us leave to hope that the Arctic Seas may at this time be more accessible than they have been for centuries past, and that discoveries may now be made in them not only interesting to the advancement of science but also to the future intercourse of mankind and the commerce of distant nations."
President of the Royal Society, London, to the Admiralty, 20th November, 1817

Those words are being cited as 'proof' that Arctic melting is in some way 'normal'.  It most definitely is not.  I haven't been able to get hold of an original, but those words seem about right.  But they refer to an attempt by William Scoresby Junior to reach the East coast of Greenland.  The ship managed to get within sight of Greenland's East coast, but was confronted by an impenetrable barrier of ice.  Today, as I write these words, much of Greenlands East coast is free of those ice barriers.

Until Frijdtof Nansen's epic voyage in the Fram it was believed by many, from reports, that the region around the geographical North Pole was open ocean.  Reports of open ocean up to that time were based on exaggerated claims based on reports in various years and geographical areas of open water.  The sort of people who are citing the President of the Royal Society in 'proof' of some madcap theory are simply showing that they have never read any of the hundreds of historical reports available from the hundreds of whaling ships which once fought their way North in the pursuit of profit.

the most formidable fields yield to the slightest grown swell, and become disrupted into thousands of pieces; and ice of only a few weeks growth, on being assailed by a turbulent sea, is broken and annihilated with incredible celerity. Bay-ice, indeed, which for weeks has been an increasing pest to the whale-fisher, is sometimes removed in the space of a few hours. The destruction is in many cases so rapid, that to an un-experienced observer, the occurrence seems incredible, and rather an illusion of fancy, than a matter of fact. Suppose a ship immoveably fixed in bay-ice, and not the smallest opening to be seen : after a lapse of time sufficient only for a moderate repose,  imagine a person rising from his bed, — when, behold, the insurmountable obstacle has vanished !

Exerpted from An Account of the Arctic Regions,
W. SCORESBY Jtm. F.R.S.E.

When a region becomes fragmented, navigable or ice free to a greater extent every year, or earlier every year, or both: that is most decidedly not normal behaviour for the Arctic.


The Nares Strait, also known as the Nares Polynya or the NOW - North Open Water separates Greenland from Ellesmere Island.  As I reported in Arctic Ice 2010 #1 - The Nature Of Sea Ice, until Robert Peary picked his ship's way between shore and ice to exit in a lead off Ellesmere Island, no ship had ever sailed so far North.  Historically, if the Nares Strait was open from end to end it opened only into a shore lead, and briefly, during late Summer. The Nares Strait has three very narrow sections where ice can form from land to land, completely blocking the Strait.  I have shown these locations in red, above. Most commonly the ice bridge forming at the exit into Baffin Bay would block ice flowing South to such an extent that the whole Strait would freeze over in Winter.  By the end of Summer there would be at least some open water as far as the Northern ice bridge area.


In Arctic News Or Science Abuse? April 5 2010 I wrote on the topic of Arctic ice:

I suggest that the bit that matters is between Greenland and Iceland, and the Nares Strait.  Both areas have ice cover which is young ice.  In particular, the Nares Strait, normally solidly packed with ice at this time, is showing anomalous behaviour.  With the Strait fully open this year, ice will be driven south by the winds.

Sea ice flux through the Nares Strait is most active during the fall and early winter, ceases in mid- to late-winter after the formation of ice arches along the strait, and re-commences after breakup in summer.
In 2007, ice arches failed to form. This resulted in the highest outflow of Arctic sea ice in the 13-year record between 1997 and 2009.

Since the 2007 ice loss the behaviour of ice in the general region of the Nares Polynya and the Lincoln Sea has indicated to me a feedback mechanism at work.  The ice bridge failed to completely form in the winter of 2009-2010.  The bridge which finally formed was too weak and too late.  With the first sun of Spring, the ice in the Lincoln Sea began to move.  As the line of constant sun moved South along the Nares Strait, the ice which would normally remain substantially frozen until late Summer began to fragment and melt.

This series of images from MODIS/aqua and MODIS/terra show normal behaviour for 2006, and then the growing area of affected ice following the ice loss of 2007. 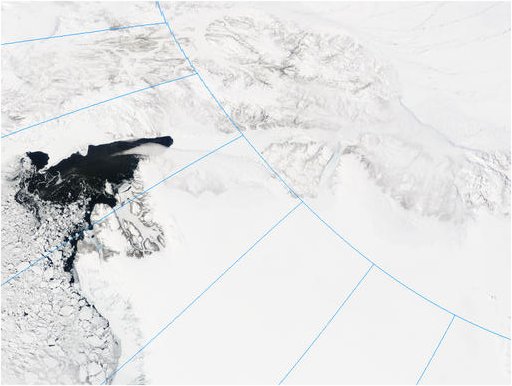 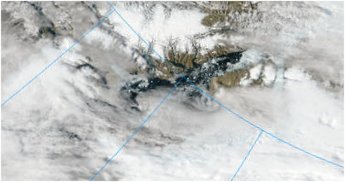 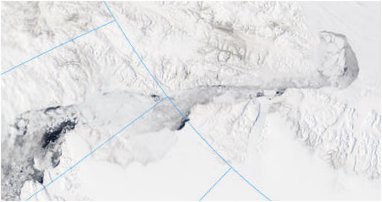 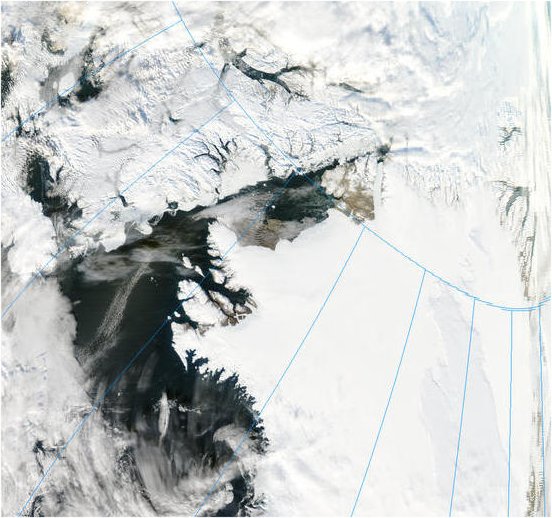 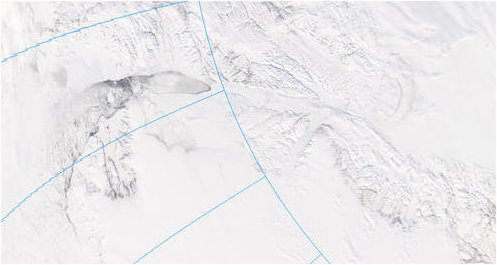 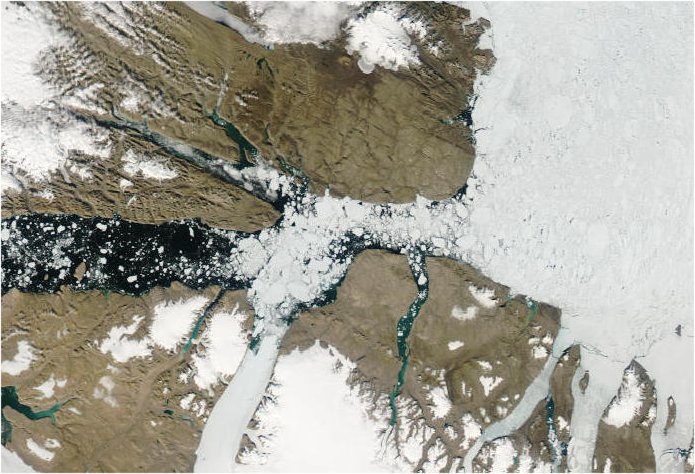 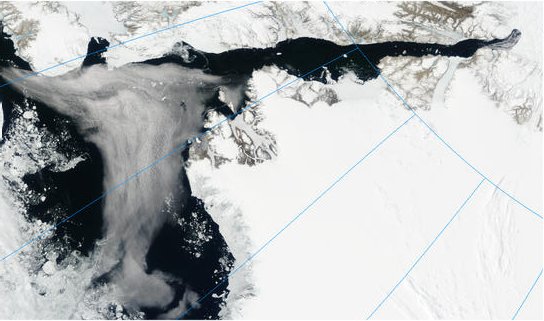 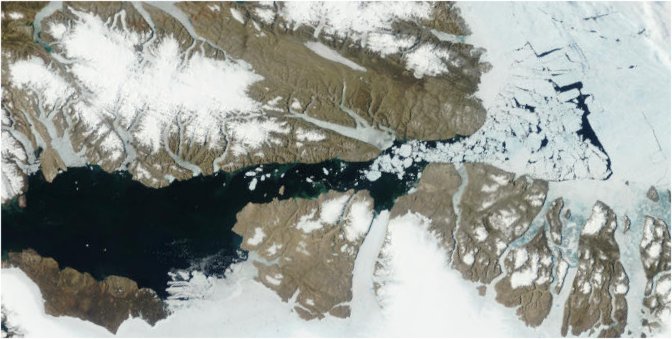 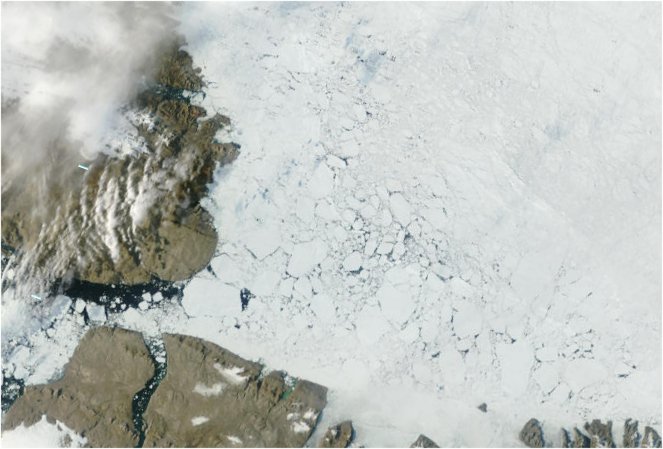 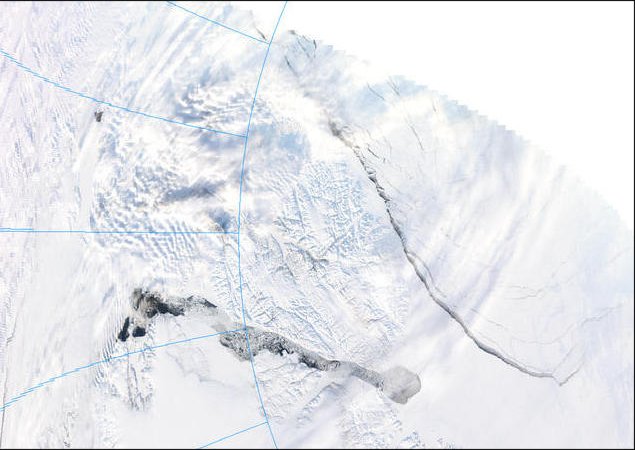 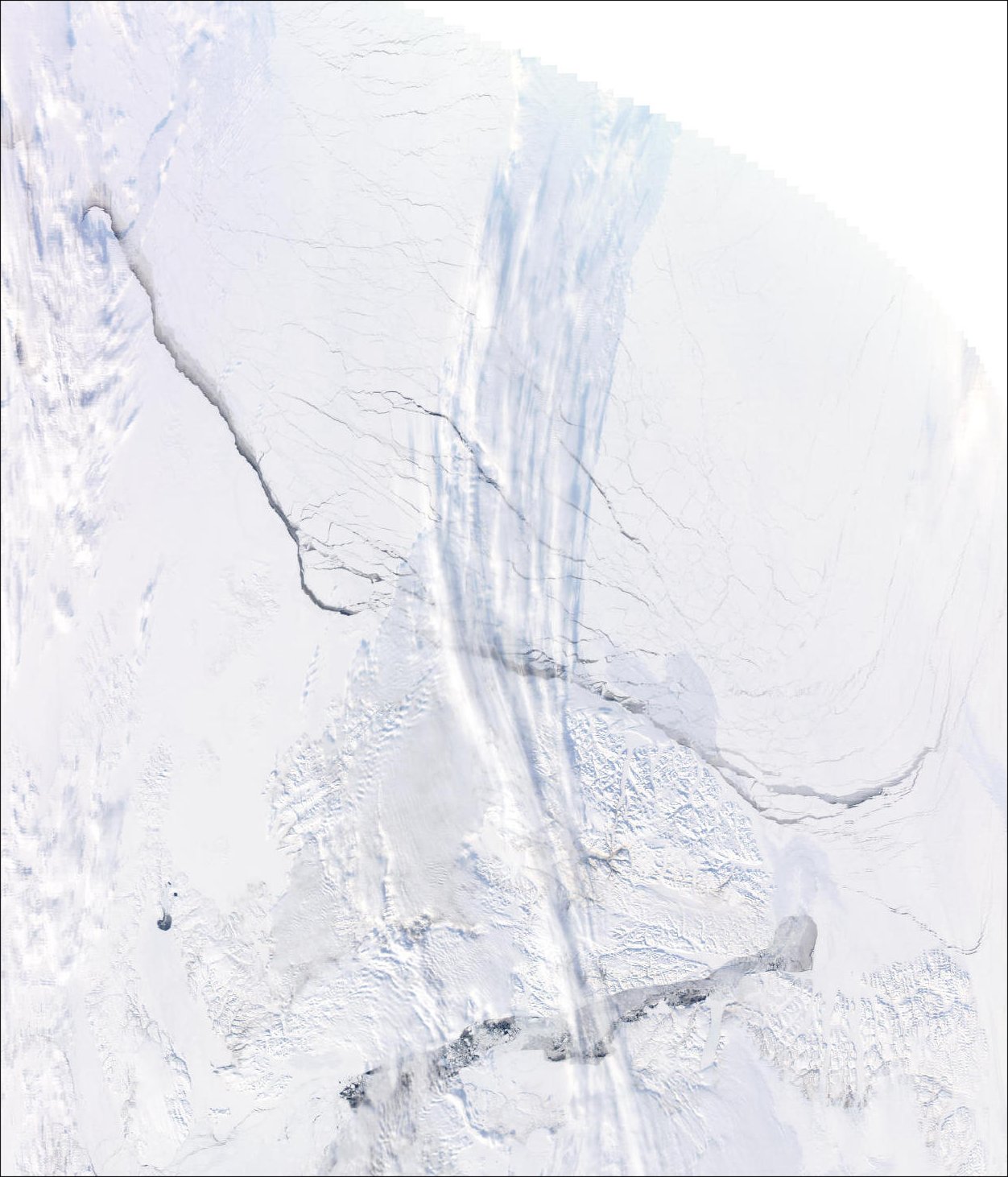 The next two images show how the one or two ice bridges which should have formed at A and / or B have this year been replaced by late-forming fragile ice-jams. 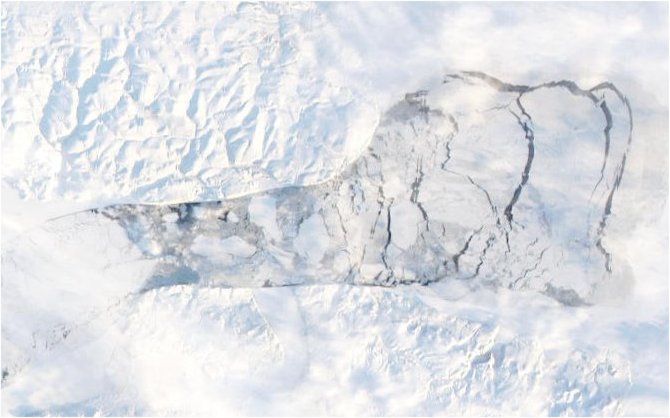 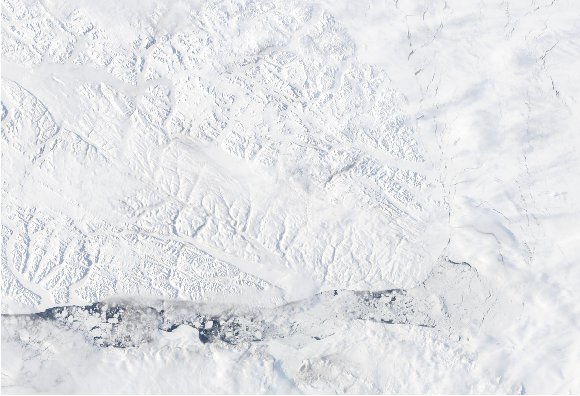 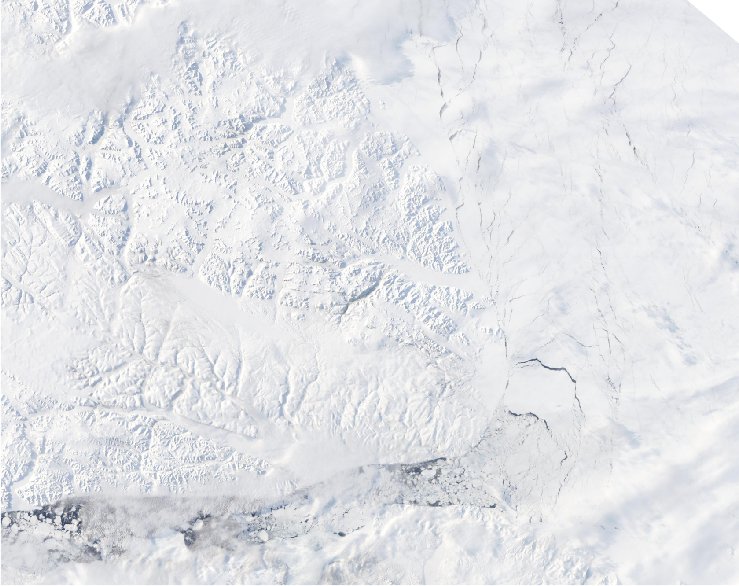 On the Lincoln Sea the broken ice becomes more broken. 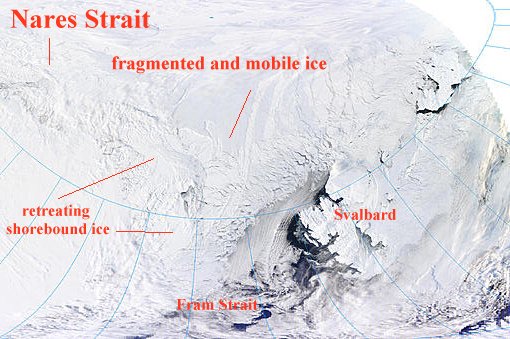 The shorebound ice between the Nares Polynya and the Greenland coast is becoming more fragmented.   In 2007 the open Nares Strait discharged about 10% of the total ice loss.

If the ice clears a path around Greenland into the Fram Strait, the main excess of ice loss this year could be through that path in addition to the Nares Strait.

There is a potential for ice loss this year far greater than the all-time losses of 2007.

The Nares Strait and Lincoln Sea areas should be surveyed as a matter of urgency.


Credits:
Except as noted, images are from http://rapidfire.sci.gsfc.nasa.gov

The originals of the cropped and/or rotated images can be found in the archive of images
at http://rapidfire.sci.gsfc.nasa.gov/realtime.