Before I discuss the recent calving of the Petermann Glacier ice tongue, I want to give credit to the many scientists who were studying, predicting and observing this event.  If I miss anyone out, please advise by email or comment and I will edit this article accordingly.

The scientists who deserve credit, in no particular order:

Humfrey Melling at DFO submitted a detailed science article to the Journal of Geophysical Research - Oceans just a few weeks before the event, and so missed the chance of including the calving in his article.

Other scientists predicted or observed the event, and I will gladly add their names here as I come to know of them.

Scientists often have to go through layers of bureaucracy before they can issue press releases, the more so if funded by the taxpayer.

I am retired and work alone from home.  Nobody gets to stand in the way of my freedom of speech.  There are no editors to change my articles, thanks to to view Hank Campbell's profile.">Hank Campbell .  I was very lucky to be able to publish my forecasts and my observations ahead of others.  As I wrote in a comment to  LiquidPublication - Publishing Without The Peer Review Hassle

We need a new credit mechanism.  Science  needs to determine credit according to a weighted system of peer - reviewed credits which examine the person or group's methodology and its contribution to the scientific method.  In such a system, I would expect to get joint credit with at least four other persons or teams for predicting the ice island and would be about 3rd or 4th in the list of live event observers.

And now, an update

The Petermann Glacier flows quite slowly compared to many other marine outlet glaciers - a mere 1km per annum.

Even at 1km per annum, the pressures built up by ice restrained by fjord walls is immense.  There appears to be some kind of obstruction about 81N 62W.  With the complete loss of sea ice on the other edge, an offset force on the ice was inevitable, as was the calving.  I am surprised that this Giant tabular berg survived intact: the shock forces which arise when pressure is released are usually sufficient to ensure at least some fragmentation in any material.

Another factor which I considered was the behaviour of ice from tributaries.  One would expect the lateral pressure of the main stream to be sufficient to integrate the tributary ice into a fairly smooth flow.  It appears to me, however, that there has been at the ice edge what would be called a turbulent flow in the case of a liquid.  In engineering terms it is chatter: the stop-start or slow-fast motion that causes damage between two surfaces in relative motion.

Finally, there has been substantial meltwater flowing through the ice tongue.  One would normally expect run-off to flush away from the calving front.  Instead, the runoff appears to have penetrated under the ice sufficiently far back as to add to any warm current penetration and so promote underside melt.

The old fissure in the ice tongue was widely expected to be the point of calving.  My own view was that it was in a zone of strong lateral compression, and so was not likely to be a point of calving until after substantial calving further downstream.  With the loss of backpressure from the August 05 calving, a new area is now likely to calve.  Much depends on the melt of the ice in the eastern margin.  Given the recent shocks, it will take little melting to release a new giant tabular iceberg.

If the area downstream of the fissure survives the remainder of the melt season without calving, which I think is doubtful, then the back pressure from sea ice and the forward pressure from the glacier may combine to increase the lateral compression.  If the tongue becomes firmly wedged then I suggest that it may survive another year or two without calving.  However, if the forward pressure induces rotation, as it did August 04 2010, then we will see another calving event.


The new ice island has drifted towards Nares Strait only a little so far. 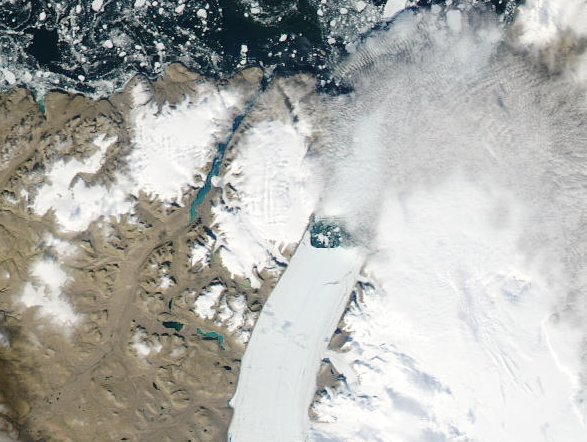 The ice island may be grounded.  However, if it drifts far enough to expose only its tip to the bergs flowing in Nares Strait then it will be gradually eroded.  If it drifts substantially then it will be exposed to impacts which will promote fractures and break-up.  However, in my opinion, if it drifts so as to block Nares Strait it will serve as a barrier to ice loss from Lincoln Sea.  As ice jams up against the barrier it will form an obstruction to ice loss far more effective than an ice bridge.  This will have significant impact on Arctic sea ice loss and will promote ice compaction along the north coasts of Ellesmere Island and Greenland.

Finally: how many times must it be said?  This ice island will not directly add an iota to sea level - it was already afloat when it calved.  Indirectly, if it allows Petermann Glacier to accelerate, which is highly likely, then that effect will contribute to sea level rise.  Also, any hazard to shipping will be confined to Nares Strait for some time to come.  Media reports of this ice island ending up intact in the Atlantic are just plain daft.  It would be easier for an elephant to escape from the zoo through the keyhole.