Since I last posted an update, many things have happened in the Arctic and sub-Arctic.

The more fragmented the main pack is, the less likely it is that floes will over-ride each other and form thick sheets.  Instead, as they bump into each other they will either fragment more or cause partial immersion.  The swamped ice - negative freeboard ice - will melt faster if the local water temperature is above 0oC.

In addition to being highly fragmented and mobile, many areas have meltwater pools on the ice.  The following images show just how warm the Arctic is.  Under cloud, as one might expect, a pool of meltwater may begin to freeze over.  If the ice moves on from frazil to nilas, then snow can settle on it.  Even when a week sun shines through a gap in the clouds, the feeble heat is not enough to melt the snow and ice.  But yet it melts. 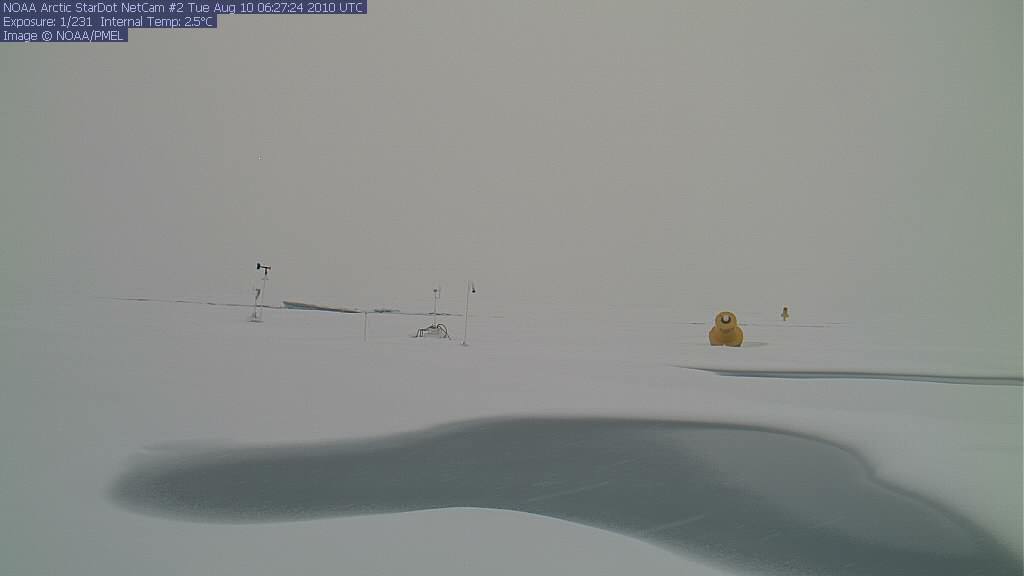 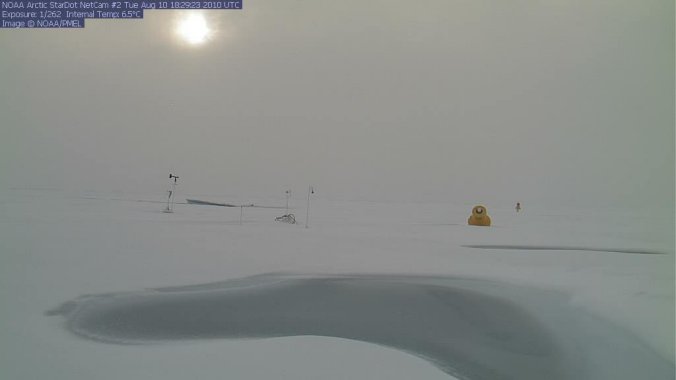 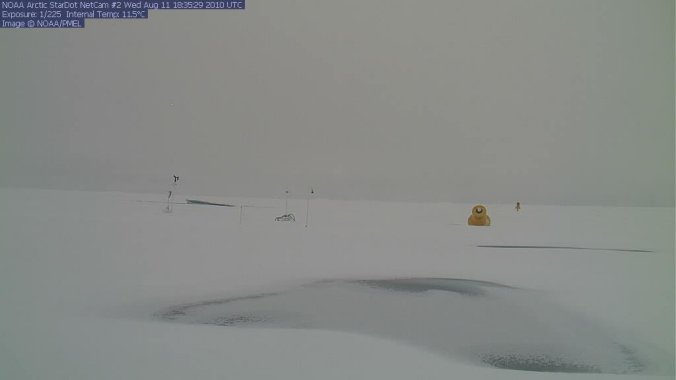 After a snowfall, snow remains on pool, demonstrating the presence of surface ice.
. 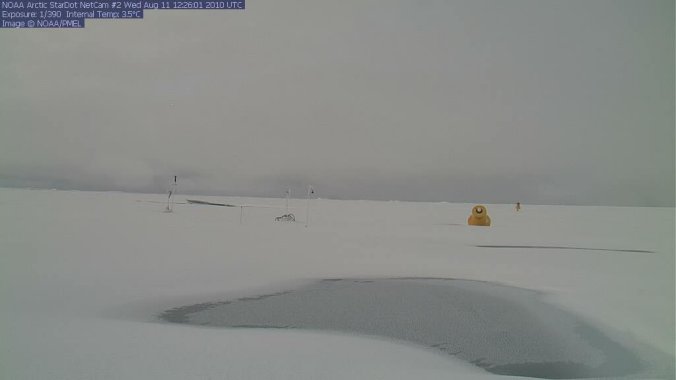 Despite cloud cover, most of the snow on the pool has melted.
I suggest that, since other snow shows no sign of melting, this pool must contain relatively warm water.  If temperatures under cloud near the pole are warm enough to melt snow then it follows that temperatures must be higher in areas not under cloud.
images source: http://www.arctic.noaa.gov/gallery_np.html


The following Arctic mosaic animation shows central ice mobility and the continued penetration of open water towards the pole.  Note the smoke from the fires near Moscow, bottom right, and smoke from Canada drifting towards the NWP, top left.

The central pack can clearly be seen to be highly mobile.  This means that it can readily be compacted by winds which are favorable to ice thickness recovery - if they occur.  Note that at any one time most of the central area is cloud free.  This promotes melt from direct insolation.  However, much, if not most melting is likely to be from from penetration of warm currents.

Volcano In Iceland Grounds UK Flights - Eyjafjallajökull,Gígjökull, Jökulhlaup, Gosmökkur.
The volcano, obviously, was not triggered by global warming.  However, the ash falling on nearby glaciers had a significant impact on local albedo.  In a warming world, every loss of albedo is highly significant. 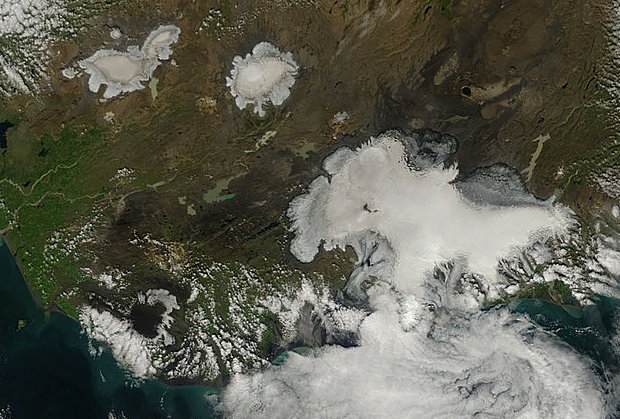 Taiga and Tundra fires: collectively the greatest number of large fires yet seen.

Russia, the country's top weatherman gloomily announced yesterday, is in the grip of its fiercest heatwave in a thousand years. Looking around, you can see what he means. The Kremlin is blanketed in thick smog from fires ringing the Russian capital; the sun, when visible, is a tiny orange orb; and a vast swath of central Russia, the world's largest country, is ablaze.
...
The impact on the country's agricultural sector has been serious. A crop-growing area equal to a mid-sized European country has gone up in flames or shrivelled to nothing, forcing the government to halt grain exports for the rest of the year. Since Russia is the world's third largest wheat exporter, the decision matters. Prices have risen sharply on world grain markets, triggering gloomy forecasts that bread prices in the UK and elsewhere may have to rise.
...
It is no surprise that Moscow, a city of 11 million, is emptying out. Those who can leave do, and those who cannot leave lock themselves inside their Soviet-era tower block flats with all the windows firmly shut.

I suggest that although smoke tends to have a cooling effect by blocking sunlight, the fact that the fires occurred in a heatwave means that smoke drifting over ice is a signal of warm air drifting over the ice.  Once the 'boots on the ground' data is in I would expect confirmation that the fires in Russia have directly contributed to Arctic warming.

The widely reported calving of Jakobshavn Glacier July 06 2010 was followed shortly after by a second and seemingly greater calving so far unreported except by the world's most accurate source of science news.  The second calving occurred on or after July 11 2010.  The following image pair shows the calving quite clearly:

The calving of the Petermann Glacier ice tongue produced - to the best of my knowledge - the biggest tabular iceberg ever seen in the Arctic.  News reports that it is the biggest ice island since 1962 have given ammunition to climate change deniers: "nothing new here, then."

The total loss of all ice shelves along the northern coasts of the Queen Elizabeth Islands and Ellesmere Island is a dramatic example of what to expect from global warming.

Those ice shelves were at least 3,000 years old.  Media reports that Petermann (2010) was the biggest loss of ice from Greenland since 1962 are just plain counterfactual.  Reports of 'biggest ice island since 1962' conflate shelf ice and ice tongues.  It's as if the press reported a truck crash in Oklahoma as: the worst truck crash in Oklahoma since the Greyhound bus crash in Texas.  They are both places, and both were vehicles, so just lump them together.

In science it is vital that apples should be compared only with apples.

In probably the single most alarmist-worthy counterfactual piece of reporting on this event, the Washington Post, citing Associated Press managed to get most of the facts wrong.

by KARL RITTER
The Associated Press
Tuesday, August 10, 2010; 5:55 PM
STOCKHOLM -- An island of ice more than four times the size of Manhattan is drifting across the Arctic Ocean after breaking off from a glacier in Greenland.

Potentially in the path of this unstoppable giant are oil platforms and shipping lanes - and any collision could do untold damage. In a worst case scenario, large chunks could reach the heavily trafficked waters where another Greenland iceberg sank the Titanic in 1912.

This sort of alarmist nonsense feeds the data-stream of the global warming denial factories.

Fact - the giant tabular berg is currently drifting very slowly towards Nares Strait, but is still inside Petermann Fjord.  It is highly likely that debris dropped at the end of Petermann Fjord by past calving has created a bar.  Until the giant tabular berg melts and/or fragments enough to pass over this bar, it is going nowhere.  The normal movement of ice is from Lincoln Sea to Nares Strait. 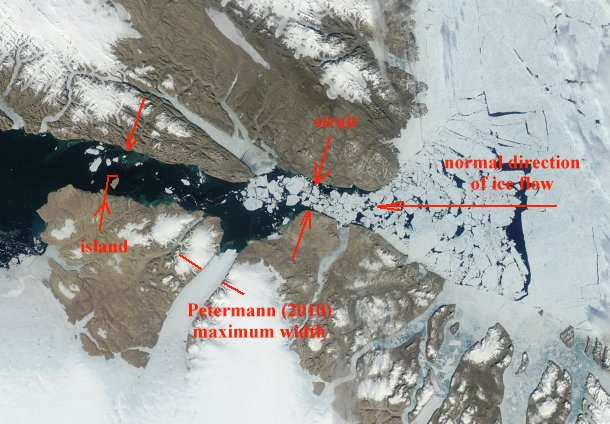 As I intimated elsewhere: for Petermann (2010) to end up in the Atlantic is as likely as it is for an elephant to escape from the zoo through the keyhole.  I should add: or the Arctic Ocean.  There have been no icebergs in the North Atlantic shipping lanes this year.  For reasons, please see Iceberg Alley And Global Warming.

After posting my article Arctic Newsflash! Petermann Ice Tongue Loses Huge Chunk August 05 2010 I was far too exhausted to deal with emails.  On August 06 2010 I emailed Associated Press, National Geographic and the UK's Guardian.  I have yet to receive the courtesy of an acknowledgment of my emails.

This year has been a year in which events predicted to arise from global warming have proceeded apace.

Badly worded and unresearched media reports of the Petermann event have given ammunition to global warming deniers.  It will take some time to undo the damage.

I will cover the region of Flade Isblink, Zachariea and 79N glaciers in a separate article.

Blatant plug:
Please help raise funds for the victims of the floods in Pakistan by clicking this link:
Tears For Pakistan
The Chatter Box
More Articles All Articles
About