In Arctic Tipping Points - #6: Are We There Yet? I attempted to show that there are multiple feedback mechanisms which are capable of causing a composite positive feedback effect in which Arctic sea ice once reduced beyond a limit will disperse very rapidly and will fail to recover.

Since I published that Article - April 29 2010 - I have investigated the matter further.  Current satellite data and historical reports combine to suggest that this year's Arctic sea ice loss will be the greatest ever seen in human history.

Throughout human history the North West and North East Passages have been traps for ships and killers of men.  Prior to 2000 none of the passages was ever open from end to end.  The ice which blocks these passages once melted is - by definition - first year ice, hence easily melted.  That is a positive feedback.

This summer, the Royal Canadian Mounted Police patrol vessel Nadon (temporarily rechristened the St Roch II) made a transit through the Northwest Passage — the shortcut between the Pacific and the Atlantic across the top of North America — and encountered very little sea ice along the way.

The Odden Ice Tongue used to form between Greenland and the tiny island of Jan_Mayen, about halfway between Iceland and Svalbard.  It has not been seen since 1997. 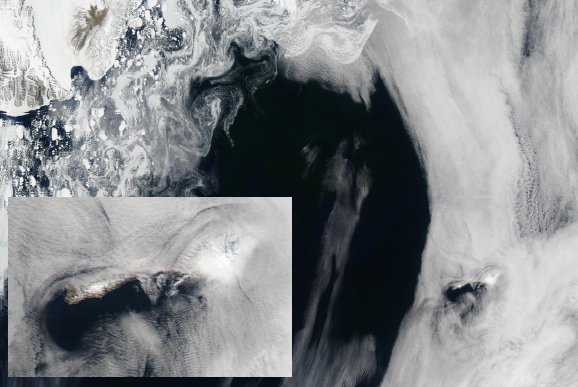 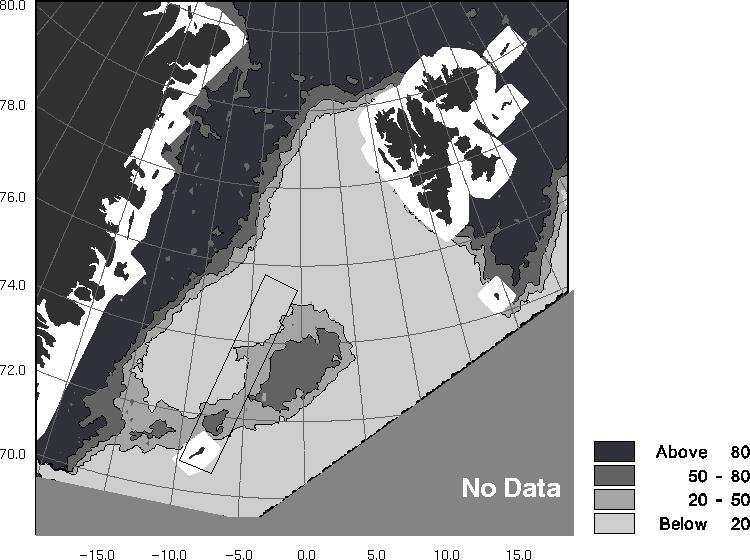 
The Odden Ice Tongue was a seasonal bridge of ice from the Greenland coast to Jan Mayen Island, with an extended tongue beyond.  The tongue had two modes of formation.  The normal mode formed sea ice directly, rejecting salt into the ocean and driving part of the return circulation of the Atlantic conveyor.  A second mode formed a bridge of mainly older ice, rejecting less salt into the ocean.

I wrote extensively about the Nares Polynya in Arctic Tipping Points - #4: The Broken Bridges Of Nares.  Here I present more images of the Nares ice bridges in past years and images of the current state of the ice in that region. 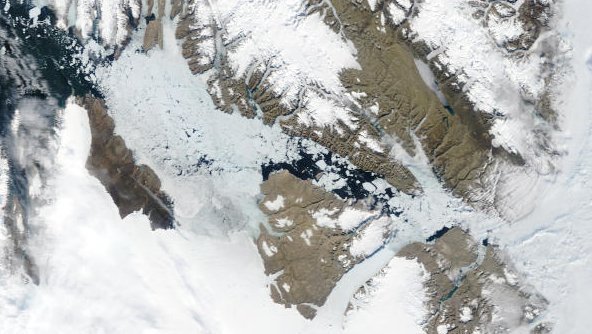 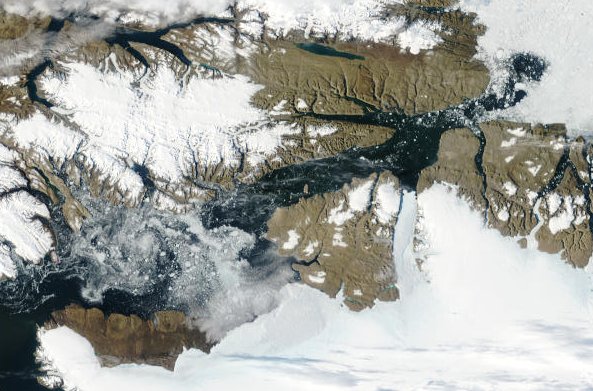 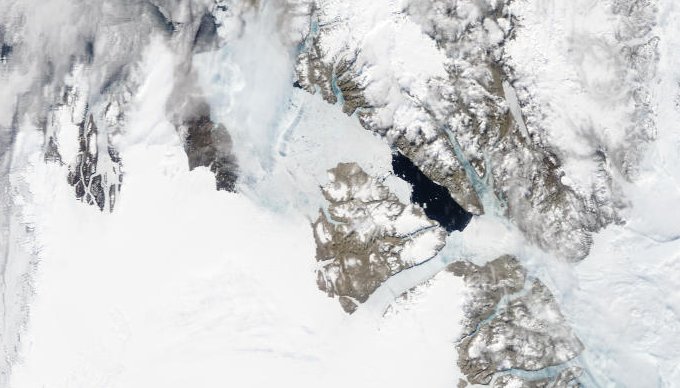 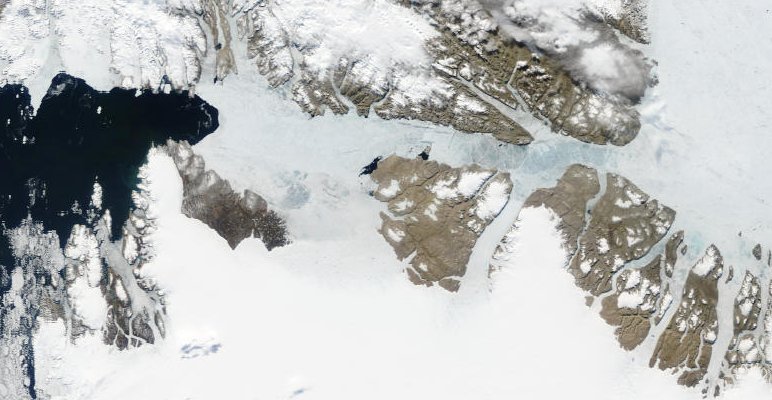 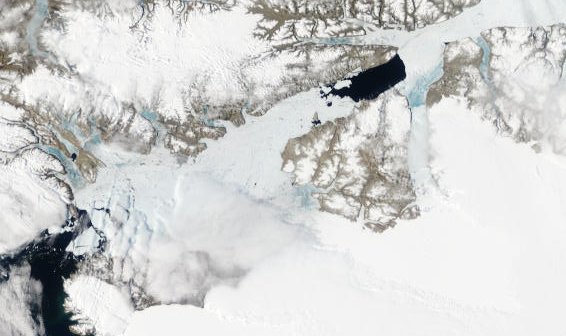 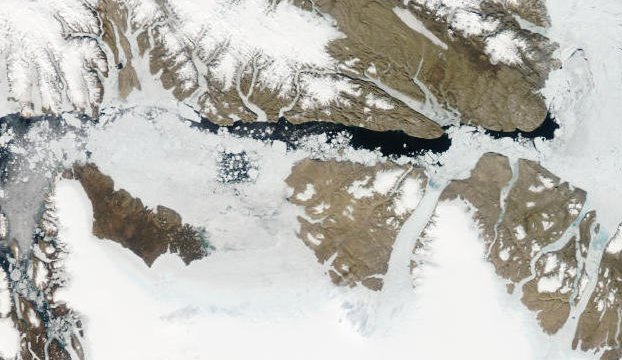 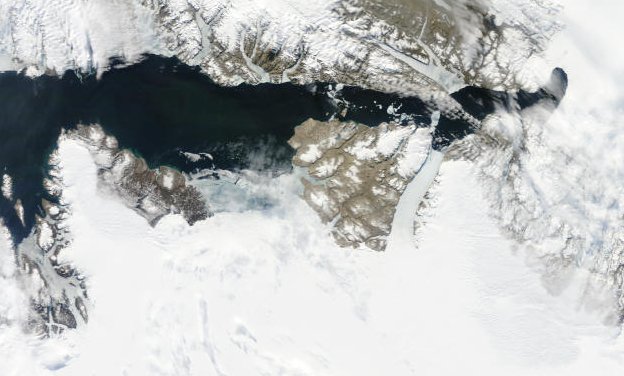 There is a great deal of variability in the above images, all of which are from July, or later where July images are not available.  The images below, from June 22 2010 show how much more readily the ice is flowing from Lincoln Sea to Baffin Bay this year.  The flow is faster and earlier. 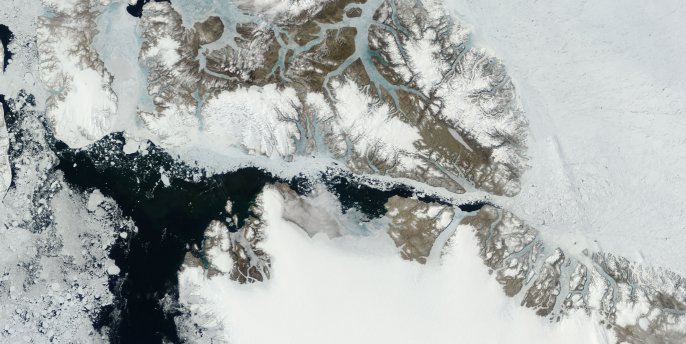 
The image below shows the granularity and mobility of the ice in greater detail.  Smaller floes make for an easier exit from the Arctic ice cap via Lincoln Sea and the Nares Polynya. 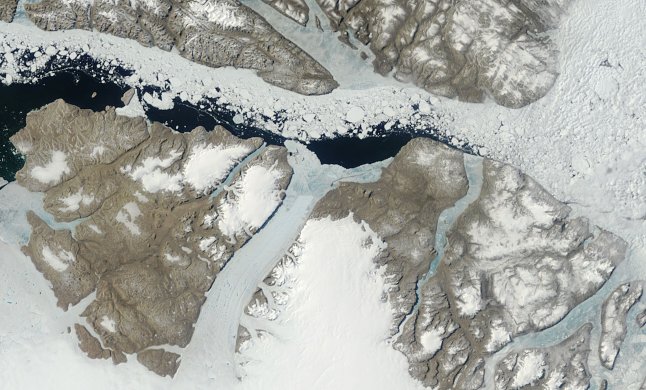 The Petermann Glacier ice tongue has a notched end and is not firmly attached to the walls of the fjord.  The next image shows more detail of the mélange - mixed bergs and sea ice - and the melt pools. 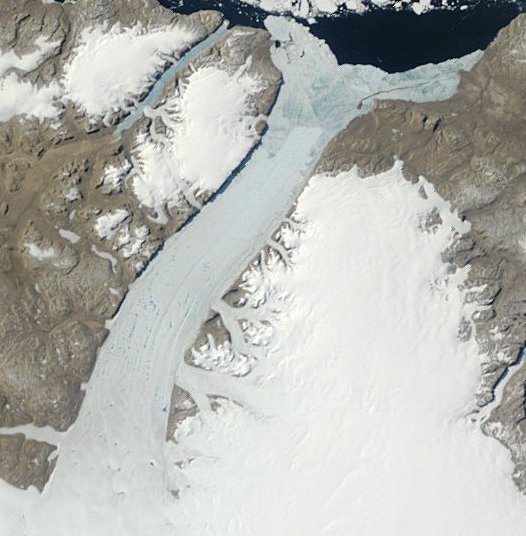 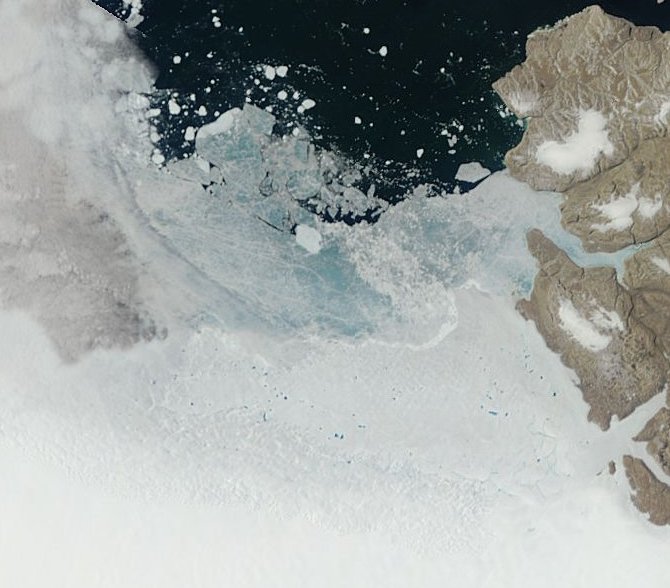 Humboldt Glacier and Kane Basin detail.
At the bottom of the image is the Greenland ice cap.  The ice cap margin is specked with meltwater pools.  The blue area is sea ice, with speckles of white showing icebergs from the main calving front. To the left of that calving front the line of the glacier rarely changes.  I consider it likely that the ice sheet is grounded on rock which slopes up towards Kane Basin, except at the calving front.  Note the jagged lumps of ice, in contrast to the more rounded and granular sea ice in the other images.

Ice which appears in satellite images as blue areas separated by white lines - I like to call it 'panel ice' - seems to be more robust than other ice.  Sea ice is often a mass of granular floes held together by new ice.  Predictably the new ice will melt or fracture first, rendering the whole ice mass highly mobile.  Panel ice tends to remain immobile longer than granular ice, and when it fractures it does so unpredictably.


Some points for discussion:

Loss of multi-year ice was restricted by the Nares ice bridges and the Odden ice tongue.

In summer, the presence of sea ice can, by acting as an insulator, produce a temperature difference between air and ocean of up to 30oC.

Before ice can form, the sea and air temperatures must drop: the summer heat must be radiated away.  After an ice free summer the Arctic winter freeze season will be shortened.

Snow increases the albedo of ice and acts as a thermal blanket.  This delays ice melt in spring.  Before Arctic snow can settle, it needs ice to settle onto.  A delay in freezing brings a delay in snow cover.  After an ice free summer, ice will be thinner and will have thinner snow cover than normal.  This is another positive feedback.

The loss of multi-year ice, the loss of the Odden ice tongue, the open Nares Strait, the granularity and mobility of the main ice cap: these factors taken together point to the likelihood that the Arctic has passed a tipping point with no realistic prospect of recovery.

A warmer Arctic will mean a greater summer loss of ice from Greenland's many glaciers..

Ice Regime and Ice Transport in Nares Strait, Moira Dunbar
http://pubs.aina.ucalgary.ca/arctic/Arctic26-4-282.pdf
On checking the link, I found the file is now corrupt.  I have posted a copy here:
Arctic26-4-282.pdf

Fall Ice Drift in Nares Strait, as Observed by Sideways-Looking Radar, Moira Dunbar
http://pubs.aina.ucalgary.ca/arctic/Arctic32-4-283.pdf
On checking the link, I found the file is now corrupt.  Unfortunately I don't have a copy.