Much of what was known about the Arctic before the 20th century came from the sheer guts and determination of men who didn't know how to quit.

The quest for a North West Passage was promoted by commercial and military considerations.  After the loss of the Franklin Expedition with two entire ships' crews, a 'no expense spared' approach was taken to finding the lost expedition.

Many of the ships engaged in the search had to be abandoned due to the terrible conditions.  Eventually, all hope of finding any member of the Franklin crews alive was abandoned.

From report after report it soon became apparent to the British government that the Arctic was, for all practical purposes, un-navigable.  For all that a ship might, through great efforts and hardships, force its way around the edge of the Arctic over a course of years, the risk of loss of life far outweighed any commercial or military benefits.

The fact that the British officially gave up trying to find an Arctic through-route shows just how terrible were conditions in the Arctic in that era.  Descriptions of conditions recorded during the search for the Franklin Expedition help us to understand today just how much the Arctic has changed.

Quarterly_Review was a journal which, although politically slanted, contains much historic data of great value to modern researchers.  I have scanned an article from my personal copy of Quarterly Review 1852-53 - Search For Franklin.  To assist the reader in placing the locations as they were then believed to be, I include here a map taken from "Quest For Franklin" by Rear-Admiral Noel Wright C.B.,O.B.E. - 1959.  I strongly recommend the book to any person researching the fate of the Franklin Expedition. 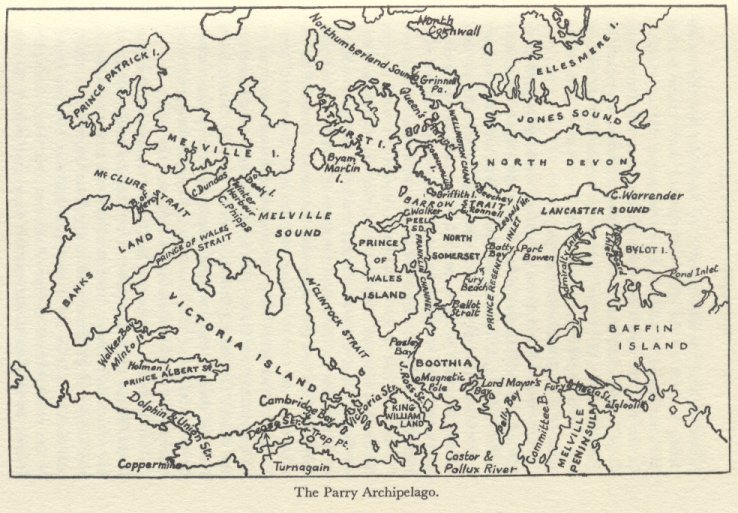 I have posted the entire Quarterly Review article as a pair of zip files.
Here is a brief extract from the transcript to whet your appetite.

THESE books and papers comprise most of the discoveries made in Arctic regions since we noticed Sir John Barrow's volume of Voyages in 1846. Franklin had sailed in the previous year, and in saying that we should wait his re-appearance with the anxiety of the princess for the diver, we much rather anticipated that we should soon have to welcome him with the goblet of gold, than that a seventh year should find us deploring his continued absence, with no better clue to his fate than dismal conjecture could supply. There was nothing in the nature of his enterprise to excite much fear for its result. The several Arctic expeditions sent out since 1818 had returned in safety. Their records are full of peril, but full also of the resources of skill and courage by which peril may be overcome. When this voyage was proposed by Barrow to the Royal Society, he urged that 'there could be no objection with regard to any apprehension of the loss of ships or men,' as it was 'remarkable that neither sickness nor death had occurred in most of the voyages ...

This copy of 'Quarterly Review 1852-53 - Search For Franklin'  was scanned and transcribed by me from my personal copy.

In the spirit of Science 2.0 outreach I emphasise that the original source article is in the public domain and I hereby permit anyone to upload the scans and images and to use them freely.

I have made a separate ASCII text file of each separate page so that it can readily be compared with the original document as stored in the jpeg scans zip file.

If you repost the zips, please link to this article or to http://www.science20.com/chatter_box  Thank you.