Tweet
Know how many scientists got started wondering about nature by blasting ants with a magnifying glass?

Quite a few, actually. While most scientists and engineers don't necessarily like Sid in "Toy Story", they confess to being a lot like him, Frankenstein-ing together toys and hooking things up to firecrackers and such.

With that in mind, The Backyard Brains company has created an app intended to get children to be interested in neuroscience. And I bet it works. But it is controversial, at least among the demographic that makes everything controversial.

Roboroach is an"electronic backpack" that fits onto a cockroach and allows its movements to be controlled by a mobile phone application.  A few academics are saying this will cause children to go around operating on their friends or something.  Others are saying it will turn children into psychopaths and all that hysteria. 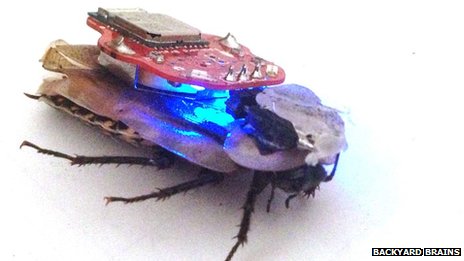 The Roboroach weighs 4.5g and is compatible with most mobile phones. It overrides the insect's antennae making it turn left and right at the flick of a switch.

Have $99 to either increase interest in science or turn your kid into Hannibal Lecter?  Buy one here.