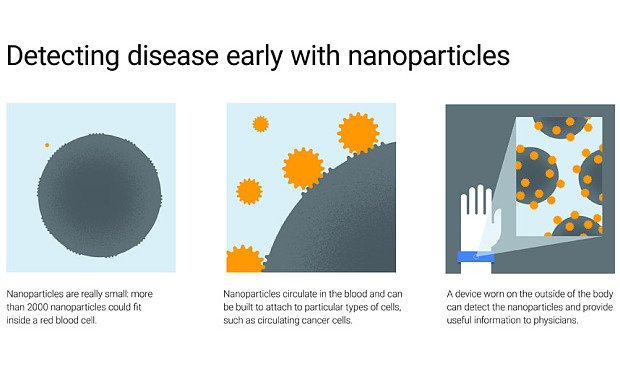 But if that isn’t enough, now Google has plans to infiltrate our bodies too, of course with an offer that is simply too good to refuse: early detection of cancer and heart attacks.

Google X, Google’s research unit that is developing such things as self-driving cars, high-altitude balloons to deliver access to the web and Google Glass, is now working on technology that combines magnetic-detecting nanoparticles, which would enter a patient’s bloodstream via a swallowed pill, with a wrist-worn sensor.

The Google X team has been focusing on developing other medical devices. It’s been working on smart contact lens to measure glucose in the tears of diabetes patients and eating utensils that cancel out hand tremors from Parkinsons or MS.

This cancer detecting pill is filled with tiny iron-oxide nanoparticles that “paint” infected cells, which give off early biochemical signals when they contract the disease. Changes in the wrist-wearing, pill popping patient’s blood chemistry that indicate early stage cancers or other diseases would be picked up on the sensor allowing diagnosis long before any physical systems appear.

The news has set the media and medical worlds abuzz, despite the fact that similar technology has been in the works by several research groups for nearly a decade. The BBC, in a video, asks the following question:

Google’s diagnostic project may never come to fruition, but its significance lies in the fact it represents part of a wider push by the firm into health tech. Bearing in mind this is already a crowded sector, it begs the question: why?

Google is at least five years away from a product approved for use by doctors, but they say they are working towards proactive detection rather than reactive treatment.

“Every test you ever go to the doctor for will be done through this system,” said Dr. Andrew Conrad, a molecular biologist and head of the Life Sciences team at Google X. “That’s our dream.”

Scientists believe nanotechnology could greatly enhance medicine. The U.S. government has invested more than $20 billion in nanotechnology research over the last decade – a fifth of which from health-related agencies.