New Scientist has a story in the current issue about epigenetics -- differences in gene expression that are not due to changes in the gene sequences themselves -- and how non-genetic variation can be both influenced environmentally and, in some cases, inherited.

The New Scientist story, which is entitled Rewriting Darwin: the new non-genetic inheritance, is another example of the "reporting on a revolution" and "underdog vindicated" fallacies so common in science reporting. 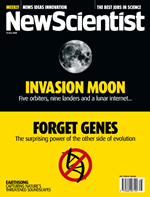 Half a century before Charles Darwin published On the Origin of Species, the French naturalist Jean-Baptiste Lamarck outlined his own theory of evolution. A cornerstone of this was the idea that characteristics acquired during an individual's lifetime can be passed on to their offspring. In its day, Lamarck's theory was generally ignored or lampooned. Then came Darwin, and Gregor Mendel's discovery of genetics. In recent years, ideas along the lines of Richard Dawkins's concept of the "selfish gene" have come to dominate discussions about heritability, and with the exception of a brief surge of interest in the late 19th and early 20th centuries, "Lamarckism" has long been consigned to the theory junkyard.

Now all that is changing. No one is arguing that Lamarck got everything right, but over the past decade it has become increasingly clear that environmental factors, such as diet or stress, can have biological consequences that are transmitted to offspring without a single change to gene sequences taking place. In fact, some biologists are already starting to consider this process as routine. However, fully accepting the idea, provocatively dubbed the "new Lamarckism", would mean a radical rewrite of modern evolutionary theory.

The article includes an interview with Eva Jablonka, who is one of the Altenberg 16 who are, as we speak, revolutionizing evolutionary theory (just kidding, but see here for a summary of what she had to discuss).

So, is this "neo-Lamarckism" and is it going to require "a radical rewrite of evolutionary theory"? Some thoughts:

2) Epigenetics, by definition, involves modifications of the expression of genetic systems.  If heritable, they would be subject to natural selection, drift, etc., when they arise within a population. So, while this is certainly interesting, it will be a welcome expansion of existing theory rather than a revolution.

3) The inheritance of acquired characters was not original to Lamarck (it was the predominant view in his era), and in any case this by itself does not make a theory of evolution "Lamarckian".  Lamarckian evolution a) considers adaptation as the result of use and disuse in response to need b) leading to enhancements of particular features that c) improve an organism's fit to its environment, which d) are then passed on and e) accumulate in each generation, f) leading to progressive increases in complexity, with g) no extinction, and h) simple forms produced anew by spontaneous generation.

4) Lamarck rejected the notion that the environment would directly affect organismal traits -- the point was that organisms responding to the environment led to adaptive changes that were passed on.

One person who postulated heritable, acquired, undirected variation was Darwin.

The imaginary Lamarck by M. Ghiselin

Shades of Lamarck by S.J. Gould

Students' preconceptions about evolution: How accurate is the characterization as "Lamarckian" when considering the history of evolutionary thought? by K. Kampourakis and V. Zogza

The early history of the idea of the inheritance of acquired characters and of pangenesis by C. Zirkle