Gerhard Adam
A recent article "These fish are evidence that humans aren't the only evil animals" began from the presumption that these fish were intentionally injuring others to avoid predation against themselves.

One problem with this article was the initial silly use of terms like "evil" or "selfish" when clearly that is not what this behavior involved.  As mentioned in the paper, there is nothing cognitively intentional about this behavior so to assign these terms is just more sensationalist nonsense. 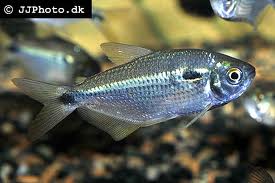 Instead what we have is an experiment in which these fish were subject to three modes of predation; active search, sit-and-wait, and pecking.  Each type represented different ways in which these fish might be preyed upon, with a fourth category representing a control [a white plastic container].

In this experiment only the active search mode of predation produced any reaction, which was expected since the other two modes were simply too arbitrary and random to afford any benefit regarding a response from the fish. As a result, it was deemed to be outside the range of traits that would likely be selected for.

Before examining the active search results it is pertinent to understand that these fish have specialized cells that release a chemical alarm when the skin has been damaged.  This alarm elicits a fear response and antipredatory behavior in fish that are nearby.

As a result, in the active search experiment, when the predator approached, the fish appeared to become more aggressive towards each other, biting others [which resulted in the chemical alarm being released], and swimming faster.

These results were interpreted as:

This response could reduce an individual's predation risk by making the other (i.e. the attacked) individual more vulnerable to predation.
http://www.sciencedirect.com/science/article/pii/S0003347213002601

In the press article, this gave rise to the notions of selfishness and these fish behaving in an "evil" manner.

Yet, I would submit that there could be a completely different interpretation of these results, that would suggest cooperative behavior instead.

In the first place we know that releasing a chemical in water is going to have limited dispersion, so the number of individuals that are exposed and capable of interpreting this danger alert is limited.

However, there is a more fundamental issue involved here as well.  Since the cue is only released when the skin is damaged, then under ordinary circumstances it would only be present after a fish had already been attacked by the predator.  This would severely limit the utility of such a warning, since it presumes that the predator has already gained several meals before the rest are aware of the danger.

Similarly the fish cannot release these chemicals by any ordinary physiological mechanism, so it follows that the only way to raise the alarm before the predator kills anyone is to bite each other without inflicting any injury.  In fact, this is precisely what occurred.

"And tests showed that the fish did indeed release their alarm chemicals after getting bitten (note: the bites didn't draw blood, they only removed scales)."

While the release of the chemical alarm may indeed make a particular individual more detectable to a predator, it seems odd that if the purpose was to "sacrifice" another individual that they wouldn't attempt to injure them.  After all, adding blood in the water would be an even stronger incentive for the predator to pursue.

In addition, we find those that had been bitten, swimming off, and then returning.  Again, this seems peculiar if there is a sense that they are being "picked on" or "sacrificed".  Instead, what may well be happening is that they are swimming off, and returning to maximize the amount of chemical alarm being dissipated in the water, so that greater numbers of fish are warned.

While I certainly can't claim that my version is accurate or correct, the point here is that one must be careful with how such behavior is interpreted and in this case, my concern is that the interpretation is occurring based on a preconceived sense of selfish behavior rather than an objective analysis.
Gerhard Adam
More Articles All Articles
About