Gerhard Adam
I recently read an article about an individual that had been struck by lightning, while it was interesting to read about the experience it was disturbing to read some of the comments that followed and their gross misunderstanding of lightning.

Lightning happens when a really huge negative charge builds up in the ground, corresponding to a positive charge overhead, and the differential becomes sufficient to jump the gap. (and, as others are pointing out repeatedly, air is an excellent insulator, so it takes a whacking huge voltage differential to make the arc.)

A lightning rod doesn't exist to provide a spot for the lightning to strike. Rather, it exists to dissipate the charge so that the strike never happens at all. This comes from early experiments with the Leyden jar; if a pointed metal rod was attached to the jar, it wouldn't charge. The electrons are able to leap off a pointed tip, and into the air, dissipating charge as fast as it accumulates. The lightning rod does the same thing, on a larger scale; it spits out electrons into the air like crazy, so that the charge won't build up sufficiently, and the lightning never hits at all.

Now, if the charge accumulates faster than the rod can dissipate it, there can still be a lightning strike, and the rod typically IS the best route to ground. But everything around the rod is going to take a hell of a jolt anyway, including, most likely, your electronics. A lightning rod getting hit means it failed to work adequately; ideally, it should never be hit at all.
http://arstechnica.com/science/2013/05/i-was-struck-by-lightning-yesterday-and-boy-am-i-sore/

The first paragraph has the description exactly backwards.  The negative charge forms at the base of the cloud while a net positive charge occurs at the ground, since the negatively charged particles present in the earth are repelled.  This is what allows the cloud to discharge the electrical build-up that has occurred.  The reverse would mean that the ground [i.e. earth] is discharging into the cloud.

The "whacking huge voltage differential" is referred to as the electric field density and describes the density of the electric flux lines between the two poles [positive and negative points of charge].  As the flux density increases, it reduces the resistance for current to flow and becomes the path of least resistance for the cloud discharge.

The purpose of the lightning rod is not to "attract" lightning but to provide a flux density high enough to create a kind of "preferred path" for the lightning strike.  In addition, by being an excellent conductor it can avoid the damage caused by the intense heat generated by a strike. 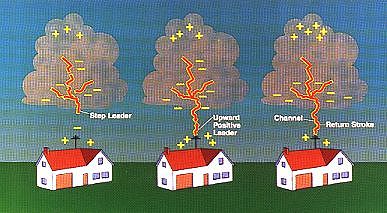 "preferred" path to direct the discharge and thereby avoid structural damage.  Specifically the lightning rod actually initiates a "traveling spark" (1) which intercepts the downward moving negative stepped leader (2).  Once the lightning stepped leader is intercepted a conducting path is created between the cloud and the rod leading to ground. 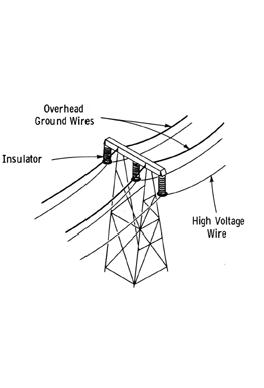 pointed, but it simply needs to be higher than any other object capable of generating the "traveling spark".  It can also consist of a higher level ground wires that runs parallel to others as a point at which the lightning can collect and be directed to ground.  This is the method employed around high voltage power lines. 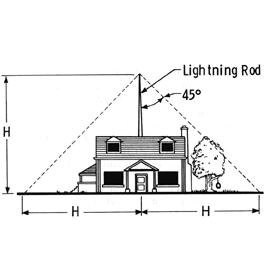 Although where a lightning strike occurs cannot be predicted with certainty, even with the use of lightning rods.  The general consensus is that there is a "cone of protection" which occurs based on the height of the lightning rod in question.  Therefore the higher object will tend to be that which is struck and therefore capable of dissipating the charge.

The primary point regarding lightning rods is that they must be extremely well grounded.  If not, then there may be other avenues for the current to follow resulting in all manner of complications [i.e. house being struck and current flowing along electrical wires, or plumbing].  In addition, poorly conducting materials can explode from the rapid thermal expansion associated with the heat generated by the electrical energy (3).

(2)  The stepped leader is the originating negatively charged channel which creates a series of steps to connect to another point for the electrical discharge.  Each surge only moves about 50 meters and so the lightning strike is formed as a series of steps until it connects to something that completes the circuit.
http://www.lightningsafety.noaa.gov/science_initiation_stepped_leader.htm

to a nearby object. If that object is a person or animal, it will use them as the conductor to ground.  This is one reason for the warning against standing under trees, since wood is a poor conductor, the electrical discharge may jump to someone standing under the tree, or discharge through their feet from the root system of the tree.
===============================
Diagrams from: "How Does A Lightning Rod Work" by Martin Uman, 1986
Gerhard Adam
More Articles All Articles
About