A team of biologists has uncovered an unlikely friendship between a carnivorous pitcher plant and a fruit-eating tree shrew.

The pitcher plant, Nepenthes lowii, can be found sprawled on the forest floor in tropical regions of Malaysia and Borneo. The leaves of the plant form swollen vessels at regular intervals. Shaped like pitchers, these vessels have a bulbous base, narrowing at the neck and flaring into an open mouth at the top. Insects are attracted to the syrupy goo on the lip, landing at the open mouth of the pitcher to feed. Stuck to the goo, the insects slide into the pitcher through the slippery throat, landing in the soup of digestive juices at the bottom. The insect dissolves, nourishing the plant with a fresh supply of nutrients and organic nitrogen.

About ten years ago, two evolutionary biologists discovered a second type of Nepenthes pitcher. Woodier and larger, these pitchers gripped tree branches with curling tendrils, and hung heavy from the forest canopy. When the two men found animal droppings at the bottom of these tree-borne pitchers, they had a strong suspicion a whole other interaction was afoot.

To find out what was happening, they set out into the jungle armed with recording equipment. Locating suitable plants, they arranged video cameras around three tree-borne pitchers and waited. Thirty-five hours later, their footage delivered a surprise.

Tree shrews, rodent-like mammals about the size of small squirrels, visited the pitchers with astounding regularity. The small animals climbed on the rim of the pitcher and fed off the buttery exudate contained in its enlarged lid. As they ate, they dropped their feces into the funnel of the pitcher over which they perched.

The tree shrews then marked the pitcher with glandular extract, claiming territory. Jonathan Moran, lead author of the study, says this was a clear sign to other tree shrews: “Stay away.” 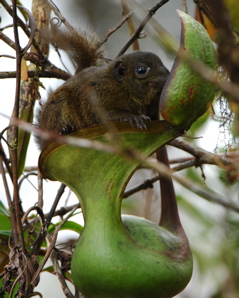 For Moran, the territorial behavior of the small mammals sealed the deal on the relationship between pitcher and shrew. “The fact that they took time and energy to mark [the pitcher] means that it is a valuable resource,” he said. The tree shrews liked the buttery goo enough to want to keep the pitcher to themselves.

It was clear that tree shrews were benefiting hugely from this relationship – the sugary substance on the lid of the pitcher fed them well. Moran’s team discovered that the pitchers turned out well fed also – nitrogen-rich shrew feces sourced more than half of the organic nitrogen absorbed by the plant.

To Moran, the pitcher’s structure and adaptation makes perfect sense. “It’s shaped almost like a toilet, with the lid reflexed away,” he said.

In this odd evolutionary twist, the Nepenthes pitcher plant has devised yet another way of getting its nitrogen to walk right into it. So far, it is the only one of its kind known to use animal feces as a source of nitrogen. Moran and team’s full description of the pitcher-shrew relationship was published online on June 10 in Biology Letters.

Moran’s work is not done. His next steps will involve looking into the stages of growth of the Nepenthes pitcher. Tree shrews, he says, have very good eyes. His team is now looking for changes in pitcher color that signal to the shrews when they are “open for business.”