Johannes Koelman
Black holes are again hitting the headlines. Another record super massive black hole has been unveiled. This time it is galaxy NGC 1277 at the center of which a true monster is discovered to be lurking. Dutch astronomer Remco van den Bosch and co-workers weighed the black hole at the center of this galaxy. They did so by interpreting the stellar kinematics from velocity dispersion measurements obtained with the Marcario Low Resolution Spectrograph on the Hobby-Eberly Telescope at the McDonald Observatory in Austin, Texas. They came to the conclusion that the giant weighs in at 17 billion suns.

Amazing stuff. You can buy the article by van den Bosch et al here for $ 32 only (or, as a special gesture to Hammock Physicist readers, download it for free here).

What makes the biggie in NGC 1277 remarkable isn't its sheer size (although it certainly is amongst the very largest black holes discovered so far), but rather the fact that it constitutes the majority of the bulge mass of the galaxy it resides in. It is well known that each of the larger galaxies tends to come with a massive black hole at its center. The common notion is that of the stellar central bulge of each galaxy hiding a black hole like a dark needle in a bright haystack. The new discovery in NGC 1277 now turns this idea upside down. At least some galaxy centers are more like a massive dark object surrounded by a few pieces of bright hay. 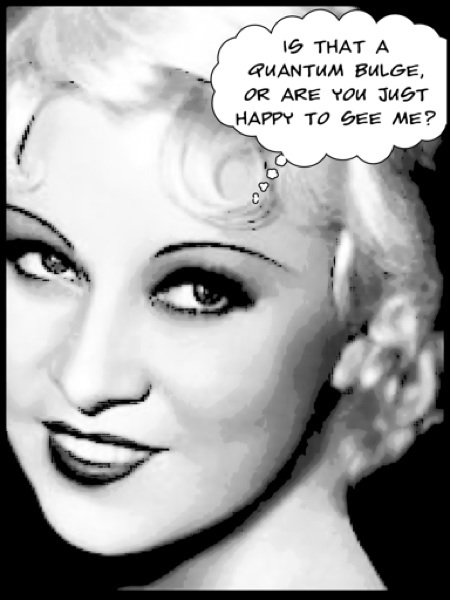 How special is the black hole in NGC 1277? Common astronomy wisdom tells us that the mass of super massive black holes is typically around 0.1% of the stellar bulge mass of the galaxy they reside in. Our own Milky Way contains a large central bulge with a mass of 20 billion suns. At the center of this bulge we find Sagittarius A*, a super massive black hole weighing in at 4 million solar masses. Doing the math, you find that Sagittarius A* makes up for only 0.02% of the mass of the central bulge of our galaxy.

Not so the monster in NGC 1277. This super massive black hole contains an astonishing 60% of the total mass of the central bulge of this galaxy. As black holes are deeply quantum in character, we may classify this central bulge, with majority of its mass concentrated in a black hole, as a quantum galactic center. And perhaps we should name NGC 1277 the 'Quantum Galaxy'.

But wait a second, why would a large black hole be a quantum object?

This black hole is huge. Unbelievably huge. Earth's loop around the sun measures a billion kilometers. Even if you blow up this orbit some three hundred times, it would still be insufficient to encircle the black hole in NGC 1277. Quantum physics describes the world of the small. Atoms, quarks, incredibly small stuff. Surely classical physics suffices to describe an object as large as this black hole!

A black hole is a system that physicists refer to as a black body radiator. It's a system in thermal equilibrium that emits electromagnetic radiation. In that sense a black hole is just like anything else you are used to. It's like a glowing wire in an incandescent light bulb, it's like a grain of sand, and it's like you and me. Every object in thermal equilibrium emits thermal radiation. However, in one aspect a black hole is very different from the thermal objects you are familiar with. It interacts with its environment in a quantum fashion.

Above a certain wavelength, the spectrum of radiation emitted by an object in thermal equilibrium can be understood using classical physics considerations. However, for shorter wavelengths quantum physics kicks in. In fact, it was the attempts to understand the short wavelength spectrum of thermal radiation that led to the birth of quantum mechanics.

The wavelength below which quantum effects need to be considered I will refer to as the quantum wavelength. It is given by

Besides the natural constants h (Planck's constant), c (the speed of light) and k (Boltzmann's constant) this equation contains only one parameter, the absolute temperature T.

The quantum wavelength demarcates the boundary between the classical and the quantum realm. Objects much larger than their associated quantum wavelength behave according to the laws of classical physics. There is no need to invoke quantum physics in the description of these objects. However, you need to be more careful with objects approaching the size of their quantum wavelength. Be prepared to give these a full quantum treatment.


Below table gives the sizes and quantum wavelengths of some thermal objects. 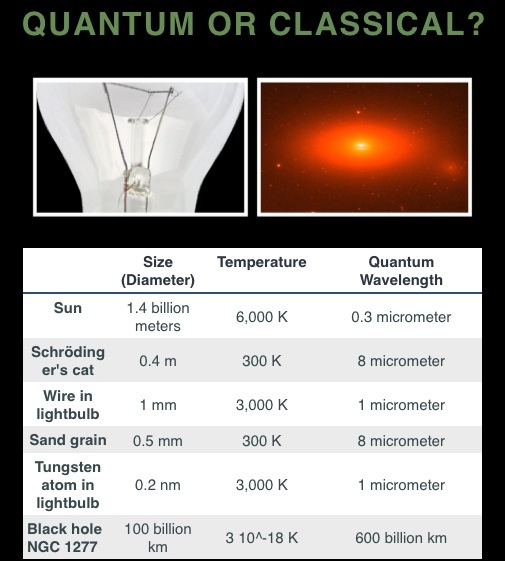 The sun, a cat, the filament in an incandescent light, and a grain of sand are all large enough to be treated classically. Yet, the giant black hole in NGC 1277 is small enough to interact quantum mechanically with it's environment. It's all dependent on temperature. And the thing is: a large black hole is freakin' cold. At least for an outside observer. But that's another story.
The hammock physicist
More Articles All Articles
About