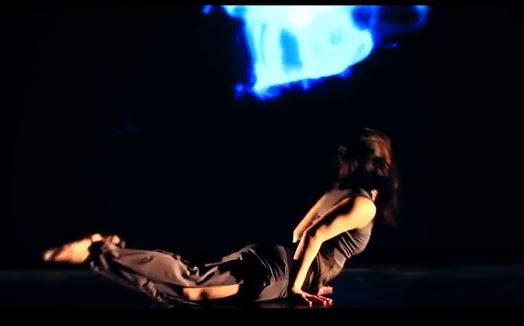 by Marsha Lewis, Inside Science

(Inside Science TV) – Scientists often examine matter that is invisible to the naked eye. This hidden atomic world is a mystery for most people, but now a scientist created a way for people to imagine what they might see as their own bodies interact with the atoms that surround them.

"You're literally being bombarded trillions and trillions of times per second, all over your entire body. Your skin, everywhere, by molecules that make up the air," said David Glowacki, Royal Society Research Fellow jointly based at the University of Bristol, in the U.K. and Stanford University in California.

Glowacki has developed a way for humans to see the atomic world around them.

“So that people can see the image of what I call their ‘energy avatar,’ which is really just this mathematical representation of their field," said Glowacki.

He created "danceroom spectroscopy" or DS for short. A 3-D video camera captures images of someone's movements. The data is sent to a high performance computer in real-time.

Our bodies can build electric charge. You can't see it, but you feel it sometimes when you touch a doorknob and get an electric shock. The computer simulates a person's body as an electric field. In the simulation, this causes your body to push away, or repel the air molecules that hit it.

“These are invisible phenomena," Glowacki said.

To add to the DS experience, Glowacki has also partnered with artists, including Camille Utterback of the Haines Gallery in San Francisco, California, to create artistic depictions of dancers as they move using the technology.

“In his system, every single particle is reacting to every single other one in really complex way, so the kind of movement that you get in that system, you can just see it even if you don’t understand the math," said Utterback.

It's a combination of art and science that gives us a glimpse into an atomic and molecular world we can't normally see.

“Just the fact that you are seeing this invisible world is quite the experience for most people!," commented Glowacki.

He also uses the DS technology to educate kids about the physics of molecules.

Marsha Lewis is a freelance producer based in California. She has won 11 National Telly Awards and nine Regional Emmy Awards for her work in local and national syndicated news. Reprinted with permission from Inside Science, an editorially independent news product of the American Institute of Physics, a nonprofit organization dedicated to advancing, promoting and serving the physical sciences.