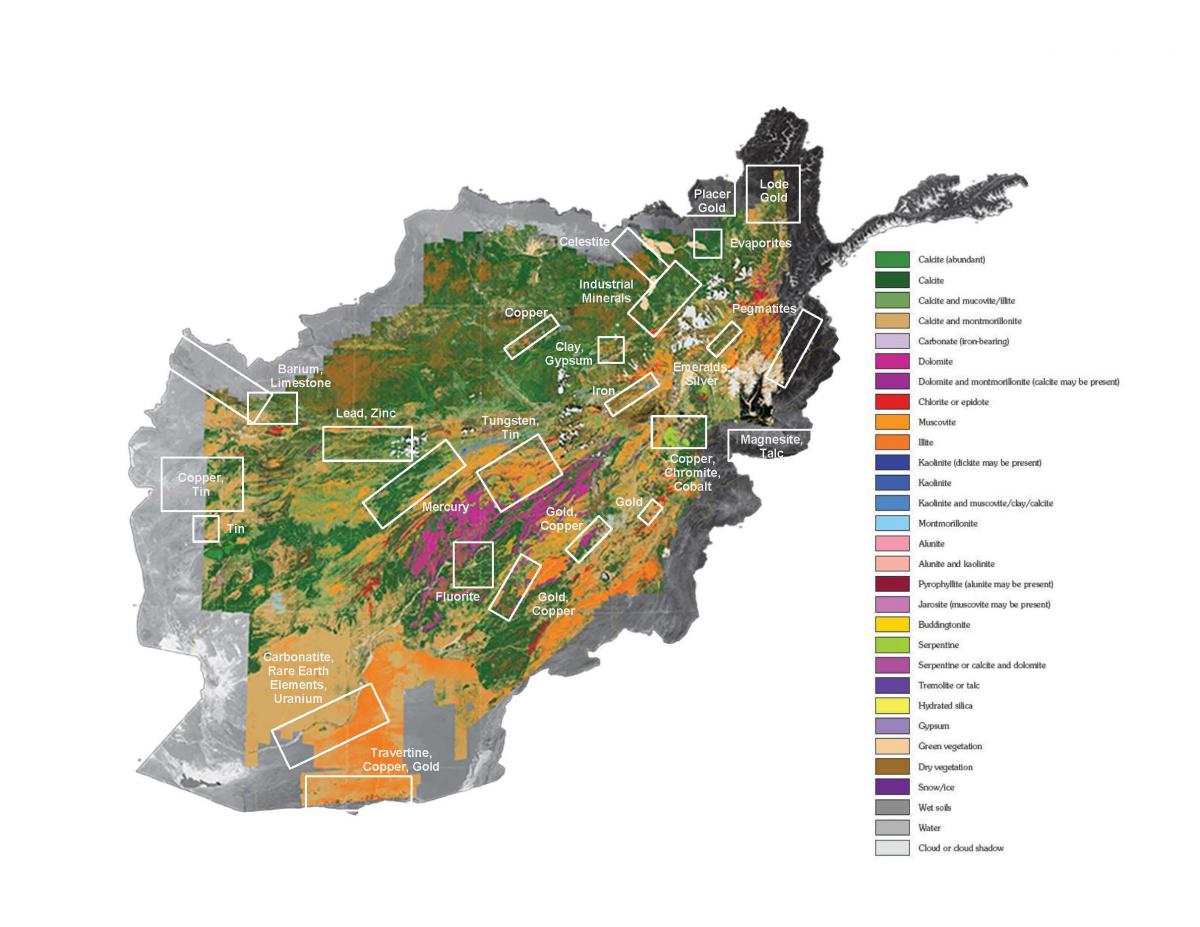 Credit: Image of map courtesy of the USGS and composite image by Patricia Waldron

By: Patricia Waldron, Inside Science

(Inside Science) -- People living in Afghanistan have mined precious gems from their land, such as lapis lazuli, since the times of the Egyptian pharaohs. But modern analyses of the country's mineral deposits show that the Afghan people have barely scratched the surface of their mineable wealth.

Maps created by the U.S Geological Survey reveal deposits of copper and iron ore as well as rare earth minerals, which are in demand for electronics manufacturing. If properly managed, this mineral wealth could create jobs that would lower the country's high unemployment rate and help release Afghanistan from its reliance on foreign aid and exports of opium and hashish.

A recent feature story in Science, written by Richard Stone, quoted James Devine, senior adviser for science applications at USGS, as saying “The conversation has changed from agriculture and opium to minerals and sophisticated development.” They must demonstrate to mining companies “not only that the minerals are there, but where they are, how much is there, and what you can do about it,” he said to Science.

The USGS originally began working in Afghanistan in the 1950s, but ceased working in the country in the late 1970s due to political instability. The relationship resumed again in 2004 when the agency began advising government officials on their mineral wealth and training Afghan scientists. In 2006, the USGS began assessing oil and gas reserves in the country, followed a year later by airborne mineral analyses.

A USGS team mapped the mineral content of most of Afghanistan using an aerial survey technique called hyperspectral imaging. The researchers boarded a repurposed B-57 bomber and canvassed 70 percent of the country in just two months. Researchers could determine what kinds of minerals they were flying over by detecting reflected sunlight. Each type of mineral reflects different wavelengths, which reveals the identity of the mineral, as well as what valuable ores might lie beneath.

The mostly bald countryside presents an open book for mapping minerals, which one researcher called a "geologist's dream." Forest covers only about two percent of the country, and most of the land is undeveloped, giving geologists -- and miners -- easy access to deposits.

The quantity of wealth is not necessarily a surprise. In the 1970s, Soviet geologists surveyed the countryside and created maps to document their rich finds. These maps were kept safe in the homes of the Afghanistan Geological Survey staff during the intervening years, even though their headquarters in Kabul had been destroyed and looted.

In his story in Science, Richard Stone wrote:

Many reports were based on antiquated views of ore-forming processes, from before the advent of plate tectonic theory. And the Soviet maps were filled with deliberate errors such as imaginary roads and villages placed miles from their true locations… Still, the data and maps helped USGS identify 24 potentially blockbuster deposits.

The USGS estimated that Afghanistan is home to some 2.2 billion tons of iron ore, 60 million tons of copper, as well as gold, zinc, aluminum, and mercury. A formation called the Khanneshin carbonatite complex in Helmand province in southern Afghanistan is especially rich in rare earth elements, holding an estimated 1 million metric tons.

Certain types of lasers, batteries, fiber optics, nuclear medicine and microscope technology all rely on rare earth elements, which are called REEs for short. They are composed of the fifteen lanthanides on the Periodic Table, as well as scandium and yttrium.

The findings may be especially important for high-tech industries. REEs make up a tiny but vital percentage of smartphones and other gadgets. Currently, China provides more than 90 percent of REEs used for manufacturing, but consumes a majority of these resources as well. The Chinese government set export quotas on these elements in 2010, which caused prices to soar, but the World Trade Organization has since overturned these regulations. If demand for REEs remains stable, then deposits in Afghanistan alone could meet demand for at least a decade.

Though the deposits offer an attractive source of income, Afghanistan faces many challenges before it can profit from its mineral wealth. The country has few roads, and most areas have little access to electricity or water, as well as poor security. Its only railway is a 47-mile track in the northern part of the country, which connects to the border of Uzbekistan. Foreign investment may help the country to build up its transportation, telecommunication and manufacturing infrastructure, but Jack Medlin, the USGS geologist who oversees the work, estimates that an investment of $5-10 billion over the next 20-25 years may be required before minerals are ready for export.

To ensure lasting peace, the government will need to spread the wealth so that a select few are not the only people in Afghanistan to profit from the country's minerals, said a U.N. report. For decades, mining has funded the activities of local warlords, and gangs have smuggled minerals out of the country. If not carefully handled, the rush to mine Afghanistan may exacerbate the existing corruption in the government and may result in poor mining practices that degrade their environment and pollute the land and water, the U.N. warned.

In July, Afghanistan passed its first mining law, and the government has already awarded two mining contracts: one to a Chinese company for a copper mine and the other to an Indian consortium for iron ore. Progress will likely be slow, but mining offers a way for this largely agrarian society to transform itself into a modern economy.

Patricia Waldron (@patriciawaldron) is a news intern at Inside Science.