As someone who fantasizes about shooting a paint gun at Hummers and other suburban attack vehicles to mark them as hazards to planetary health, I recently succumbed to the most scandalous vacation decision. My husband and I were to drive around the Southwest in an RV, dragging two motorcycles – bikes that aren’t even street legal, I might add, only meant for riding at high speed around a tarmac racetrack, burning up fossil fuels just for the hell of it.

“How many miles does this RV do to the gallon?” I timidly asked the man who handed me the rental papers to sign.

“Well, the manual says 10, but it’s more like 7, particularly with a trailer.” He said. We had chosen the smallest camper. I wondered what the larger ones get.

“I’m going to cover my face with a ski mask just in case we run into someone we know,” I said to my husband.

“I wonder how it would compare with flying and staying in over air-conditioned hotels?” mused my ever optimistic hubby. “I bet it’s not as bad as you think.”

I seized this opening for redemption of sorts. During our ten days of driving an entire house on wheels just over 2,000 miles, I would write down every consumable we used. Every drop of gasoline, propane and water (drinking, shower, gray and black) would be written into my little note book to be compared later with other vacation decisions we could have made. I decided to exclude food as we’d have to eat no matter where we went on holiday.

Of course, this examination would force me to drive so as to squeeze every extra mile out of each gallon of gas to skew the data most in our favor. If the guys in Myth Busters said we would use less gas by opening the windows and ruining the aerodynamics of the car (what aerodynamics can a camper possibly have anyway?) instead of turning on the AC, then that’s what we’d do… even in Death Valley at mid day, darn it!

The first night we stopped on a deserted road not far from the Palo Verde nuclear power plant near the Arizona/California border. It was fairly cool outside so we decided to use convection to cool the van. We opened and closed various windows, vents and doors to maximize the current, but nearly drowned in our own sweat because the vehicle was a stagnant heat trap.

I lay awake smelling the desert soil and creosote bushes outside. I contemplated turning on the AC, just for a few minutes.

Homo sapiens conveniensis. That’s what I’d become, hooked on the conveniences of modern living. I couldn’t even sleep without the air temperature being just right.

I cogitated our obsession with bending the environment to suit ourselves. Surely it is a purely human trait, and that all those who think we are different from the rest of the animal kingdom are right? But no, even termites do it. They build their mounds in such a way as to optimize convection from the cool earth to maintain an even temperature inside, while the baking African sun pounds the dark exterior. I lay awake remembering the architect Mick Pearce who made international architecture news a few years ago when he constructed a building in Zimbabwe based on the termites’ technique. I wished termites had built our camper.

Around three in the morning, when neither of us had slept a wink all in the name of reducing our mile-high mountain of emissions by an inch or two, we finally broke down and turned on the generator to run the AC. We fell asleep instantaneously with the cool breeze. The generator ran 6 hours that night.

The next day we drafted behind trucks careening down I10 to save gas. It worked like a charm – the truck in front seemed to literally pull us along through fields of oil-pumping nodding donkeys, all the way to the welcoming, outstretched arms of the windmills that turned just east of Los Angeles.

Apparently we had entered the ranks of hypermilers – guys and gals who go to extreme lengths to increase gas mileage (including wearing ice vests when driving in hot weather to reduce the need for AC). So many people draft to save gas that this year the American Trucking Association issued a statement warning drivers against the dangerous activity of “extreme tailgating.” However, while the typical hypermiler strives to get over 100 mgp, I was determined to get over 10.

When we pulled up for gas, I found out that pumps shut off automatically at $75. Seventy five bucks? I’ve never put more than thirty in a tank. We had to ask the attendants to approve more liquid gold for our seemingly bottomless pit of mobile sleeping quarters.

But despite my utter initial derision, I was beginning to understand why people love these things. It’s freedom in comfort. Stop where you like, when you like. Your beer is cold. The shower is hot. The bed is comfy. Outside, the moon eclipses overhead, darkening the night sky for the Milky Way to shine. Waves crash rhythmically across a rocky beach in Big Sur with not a soul around.

Or how about camping – if you can really call such luxury camping – on a small lane lined with grapevines laden with ripe fruit, waking up to the sound of people harvesting. We strolled through a vineyard marked “organic,” fresh-brewed coffee in hand. Yellow sticky tape wound through the vines to trap aphids, whitefly and other pests. Shiny paper attached to the tops of the plants flapped in the breeze and flashed when the sun struck it to deter birds.

This RVing thing ain’t half bad.

When we finally returned home, I collated the data. After clocking 2,339 miles and three days on race tracks in California and New Mexico (need I say that it is soooooooo nice to come off hot tarmac and into the cool camper and grab a chilled Red Bull in preparation for the next riding session), here’s how the numbers stacked up. I’m warning you, if you are squeamish, don’t look. They’re that ugly. 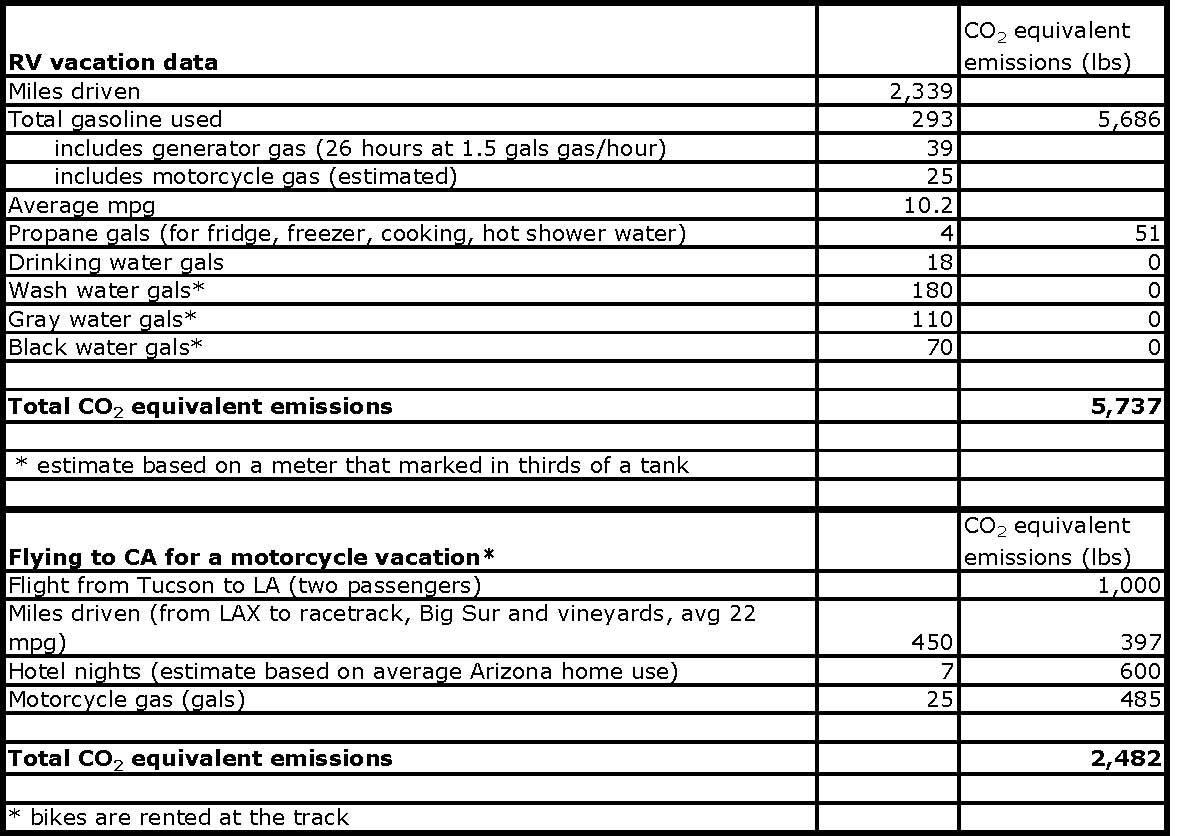 Sometimes things really are as bad as you imagine – or in this case worse. I thought that flying would at least have been naughtier – but no, I could fly to England and back and still not have used as much gas or put as many emissions into the air (roughly 4,500 lbs of CO2 equivalent emissions). My husband and I could have flown several times to LA and back. We could have heated and cooled an average Arizona home for 3 months.

Apparently, we could also have driven the whole way on waste vegetable oil and smelling French fries. A family of four drove across country last year in a super-deluxe giganto RV they had retrofitted for next to nothing by Frybrid, a company that specializes in turning diesels into veggie vehicles.

I didn’t compare our water usage to anything as it seemed that our driving travesty far outweighed any virtue we may have gained by being water hoarders.

Now I’m going to slink away to go plant a couple of trees to make up for my carbon fiasco. Oh, I forgot, it will have to wait until a week from now when I get back from England. Guess I’ll be planting a few more for that one too.