Helen Barratt
UFOs or ‘Unidentified Falling Objects’ have apparently been causing problems in the form of mysterious rapid beam dumps at the Large Hadron Collidor (LHC). It is not yet known definitely what is causing these UFOs and even exactly what they are. One as yet unproven hypothesis is that they are dust particles falling into the beam path and triggering a beam dump. Studies have shown they occur primarily at the injection points shortly after injection, often but not always creating problems before the LHC beams have become stable. 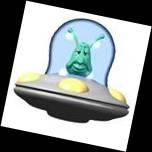 There had been over 5000 below threshold UFO events by June 2011, yet surprisingly, at that time their frequency was not increasing with further intensity advances. Possible sources of these hypothetical dust particles include distributed ion pumps, electrical discharges, movable devices and articles frozen or condensated at cold elements. Simulations suggest that these hypothetical dust particles are also positively ionized and repelled from the beam.

As a laywoman who is very interested in the recent reports of hypothetical superluminal neutrinos being produced by the LHC and measured by OPERA at Gran Sasso, I was quite fascinated to read a report about these UFOs at the LHC on viXra several months ago, which contained links to a powerpoint of a detailed June 2011 UFO report from the CERN LHC Beam Operating Committee.

In September 2011, another quite technical Powerpoint report from J. Wenninger at CERN’s LHC Beams Department Operation group,  provided an update of the latest UFO research findings see http://jwenning.web.cern.ch/jwenning/documents/LHC/Talks/LHC.PAF.Sep11.ppt however, I was hoping that more layperson reader friendly scientific information, would have become more generally available on the Internet by now, so hopefully writing this blog will help to bring this about, in the meantime here is a quite detailed scientific paper describing the UFO's in the LHC.

'The size of the LHC constitutes an exceptional engineering challenge with unique operational issues on account of the amount of energy stored in the magnets and the beams. While operating, the total energy stored in the magnets is 10 GJ (equivalent to 2.4 tons of TNT) and the total energy carried by the two beams reaches 724 MJ (173 kilograms of TNT).’‘Loss of only one ten-millionth part (10−7) of the beam is sufficient to quench a superconducting magnet, while the beam dump must absorb 362 MJ (87 kilograms of TNT) for each of the two beams. These energies are carried by very little matter: under nominal operating conditions (2,808 bunches per beam, 1.15×1011 protons per bunch), the beam pipes contain 1.0×10−9 gram of hydrogen, which, in standard conditions for temperature and pressure, would fill the volume of one grain of fine sand.’

The ViXra Log
The Vixra log website claims to provide news about science in general and also reports on large scientific experiments, plus articles on unusual episodes from the history of science and mathematics. Earlier this year in February 2011 this viXra log reported that :-

‘The Large Hadron Collider’s cryogenic systems have now cooled down all the superconducting magnets to 1.9 degree Kelvin as required for this year’s physics runs. This means that the main accelerator ring is essentially ready for beam injection which is scheduled to start on 21st February.’‘The plan will be to bring the collider back to last years peak luminosity of 0.2/nb/s as quicky as possible so that the experiments can start to add significant data to what they have already collected. The bunch spacing used will be 75 ns instead of the 150 ns used before. With this closer packing it should be possible to circulate about 900 bunches in each beam to more than double the beam intensity. Further luminosity increases will be achieved with a tighter squeeze of the beams at the collision points.'

'Overall they hope to slowly progress towards 1.0/nb/s luminosity then just work on maximum running efficiency.’ ‘Some problems identified towards the end of last year will have to be dealt with. This includes Unidentified Falling Objects in the beam pipe and a build up of electron clouds. To clean the pipes they will “scrub” with extra high intensity beams at lower energy using 50ns spacing to pack in even more bunches. As last year, the proton physics operations will end in November to allow time for some more heavy ion collisions. This year they will aim for a significant increase in luminosity for these collisions. At the end of the extended proton physics run in 2012 they may try out collisions of protons on heavy ions. As last year we plan to closely follow the progress on viXra Log.’

‘In his talk Myres gave some more information about UFOs. These are mysterious rapid beam loss events thought to be caused by particles falling into the beam path. They can trigger the protection mechanisms to dump the beams. Studies have shown that they most often occur at the injection points and almost always shortly after injection causing problems before they get to stable beams. Surprisingly their frequency is not increasing with further intensity advances. They were 110 of these UFO events last year and already 5000 this year, but only the strongest cases can trigger a beam dump.’

The CERN LHC Beam Operating Committee Powerpoint Report on UFOs
A detailed powerpoint report on these UFOs dated June 2011 from the CERN LHC Beam Operating Committee authored by Tobias Baer contains many interesting statistical graphs and diagrams, detailing extensive research into these LHC UFOs, including some of the following information and summaries:- 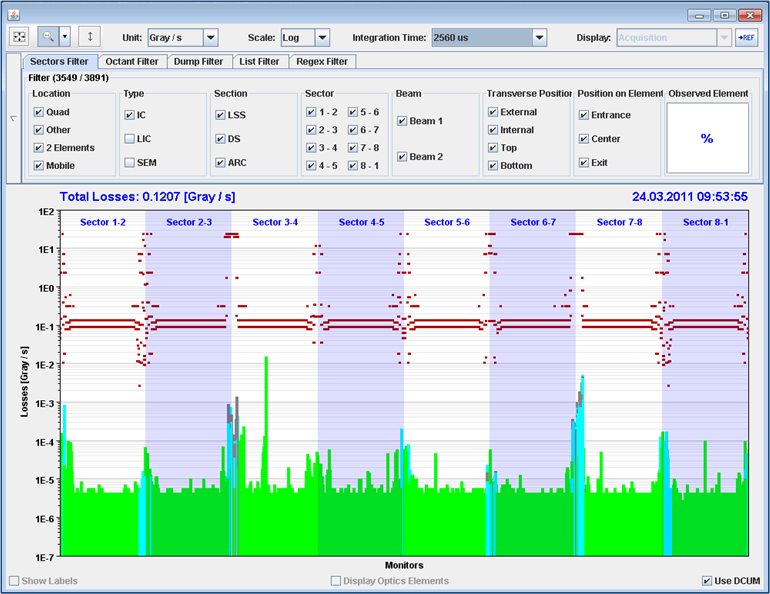 Most events are much below threshold

•       No clear dependency of peak loss on bunch intensity.

Tendency that harder UFOs are faster.

Most of the UFOs around the MKIs occur before going to stable beams.

•       Typical scenario for MKI UFOs during scrubbing: Loss spikes occur in first few minutes after an injection and go away then.

UFOs at MKIs per fill

Despite a large vacuum spike, there is no clear correlation with UFO's

Additional BLMs during next Technical Stop.

•       Mitigation:Further increase of BLM thresholds...
But: For higher energies thresholds need to be decreased. 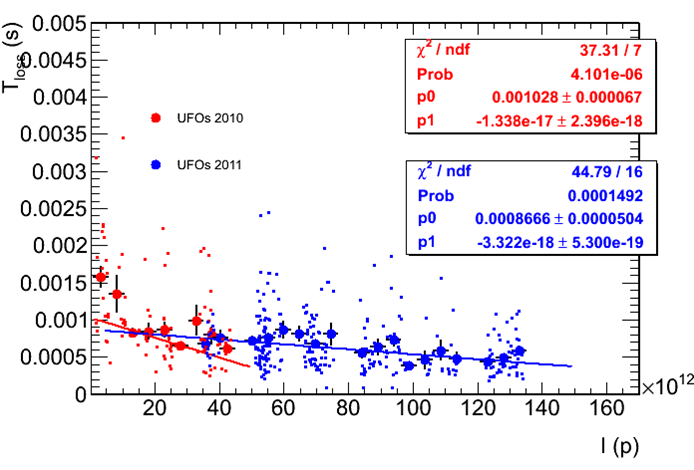 Correlation of Tloss and width of Gaussian fitted to post mortem turn-by-turn data.

•       After the increase of the BLM Threshold by a factor of 3 there were about 4.1times less beam dumps due to fast loss events.

It is at a TCT

3.         The acquisition is skipped for a few seconds after injection warning and beam wire scan timing event.

Most events are much belowthreshold.

•       Dust particle will be positively ionized and be repelled from the beam.

Most UFO shapes are Gaussian, thus most UFOs are expected to be smaller than the beam.

The UFO speed corresponds to the expected speed for a free fall from the aperture.

The additional information about the LHC UFOs that I was able to glean from the more recent September report from CERN was in summary :-

'Very fast beam loss events in super-conducting regions of the LHC were THE surprise of 2010 –nicknamed UFOs (Unidentified Falling Object).

Things are‘calming down’ at 3.5 TeV, but the situation is worrying for future 7 TeV operation: Extrapolation to 7 TeV predicts ~ 100 dumps / year.

Due to lower quench thresholds and larger deposited energy density.

Most likely hypothesis for UFO: small ‘dust ‘ particle falling into the beam

The UFOs are distributed around the machine. About 7% of all UFOs are around theinjection kickers.

We are focusing on the understanding of UFO at the MKIs

Detailed FLUKA model of the injection region to reproduce UFO losses and help localizing the source(s).

Spare MKI that was removed from the LHC last year will be opened for dust analysis.'

Make love not war
More Articles All Articles
About