Mark Changizi
Daniel Tammet is an autistic savant and author of the recent book Embracing the Wide Sky: A Tour Across the Horizons of the Mind (Free Press). You may have heard of him. For example, most people first became aware of the existence of Iceland upon hearing that Tammet learned Icelandic in a week.

This is also the fellow that rattled off the first 22,514 digits of pi in five hours, enough for even the most exacting civil engineer, and far more accurate than the 19th century Texas town that passed an ordinance that pi would be approximated as 4. If ever there were a real human with superpowers, then Tammet fits the bill. Although stricken with adversity, his brain nevertheless is in certain respects blessed with something extra, smarter, almost magical. 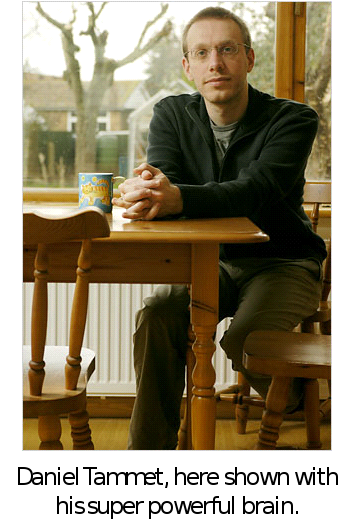 You might be responding, “Extraordinary powers! Me? No, you must be mistaken.” And that does seem like a reasonable response, because if we really had mind-boggling powers, wouldn’t we be the first to know? The answer is, “No.” Your own powers are perhaps the most difficult for you to notice. Your capabilities were selected over evolutionary time to work effortlessly as intended, but there was no selection pressure to brag to your consciousness about how exceptionally cool your hardware is.

You have employed your natural capabilities your whole life, and you have seen them in action in everyone you know; that leads to a “nothing to see here, folks, please go home” mentality about your own capabilities. The only time you are likely to notice your capabilities is when something goes wrong with them. But that still falls quite short of appreciating just how powerful the mechanisms are when they are up and running.

And this is where Daniel Tammet’s brain, and that of other savants, becomes useful . (I knew there was a reason for your brain, Daniel!) His brain allows us to begin to appreciate the true extent of our own non-savant capabilities. The savant brain is just like our brain, but with a twist. And because giving a (metaphorical) twist to neural tissue can only hinder its workings, the powers of savants are an underestimate to the power we have inside us.

Why? Consider what cannot be underlying the talents of savants. It is NOT the case that their brain possesses mechanisms, or algorithms, fundamentally different from those found in our brains. That’s the impression one might get by watching television shows or movies about savants: their brains are endowed with some altogether fancy qualitatively new design enabling them to implement their power. But savants are savants because of a disorder; their brains do not end up as they “should” be.

Their brains have undergone a “twist”. And when mistakes happen in the construction of any machine – biological or otherwise – the chances of getting efficiently designed and altogether new functionality is essential zero. Evolution gets fancy new functionality by virtue of countless generations of tiny changes. Evolution does not design new gadgets in one go.

What must, then, be going on is that one of the fancy gadgets that is inside all of us is being directed, in savants, in a manner in which it wasn’t selected for. For example, Tammet describes his internal experience of what it’s like to determine the digits of pi as something like visualizing a complex landscape. His brain ended up with a “twist” that gave him the ability to harness the computational power of his visual system for calculating the digits of pi, something his visual system was not designed to do. (As an aside, see my own attempt to harness our visual system for computation)

The beauty of savant cases is that once the power of the brain is redirected in an utterly unusual direction, then we who observe these savant powers in action have a much better ability to judge the true extent of their power. Whereas we are nearly incapable of gauging how superbly capable the mechanisms are when directed as evolution intended, we see clear-as-day the brawny power of our mechanisms when twisted to point in a strange direction.

When we see Daniel Tammet reaching the 22,500th digit of pi, and we’re reeling with wonder, we should pause and realize that what Tammet has done is provide a lens through which you can see the superpower hidden inside your own brain.

The machinery Tammet harnesses for pi-calculation – machinery you have as well, but without the “twist” you can’t harness it as he does – is much more well designed for what it is supposed to do (something having to do with seeing) than for pi-calculating, so the power of Tammet’s superpower pales in comparison to what’s going inside of all of us (including Tammet when he uses his visual system as “intended”).

Daniel, thanks for illustrating to the world the amazing power of our brains! And thanks for being a good sport!
Mark Changizi
More Articles All Articles
About