There is nothing so compelling as a story about falling down, recovering your footing, and then charging over the goal line completely redeemed … unless it is two such stories. The Denver Broncos’ Super Bowl 50 victory and the laser interferometer gravitational-wave observatory’s (LIGO’s) detection of gravity waves offer parallel examples. What, football and physics? Yep. I watched the big game on TV, like tens of millions of others. But as a technical consultant to LIGO, I had a Goodyear blimp’s view of their gridiron when the collaboration fumbled its funding, recovered its mojo, and then sprinted to victory by observing gravitational radiation generated more than a billion years ago.

The Super Bowl of Physics

Peyton Manning’s life-long victory lap has just begun. But so has that of Profs. Kip Thorne and Rainier Weiss of the California and Massachusetts Institutes of technology, respectively, who are likely to share the Nobel Prize in Physics. Similar to the battered Manning, who was benched mid-season and considered down and out by many, so the LIGO all-star team of physicists stumbled.

During the late 1980’s a triumvirate of professors, Thorne, Weiss, and Drever, began using laser interferometry to try and sense the subtle tremor gravity waves would induce in the Earth’s crust. Although they were a power trio of insight, diligence, and madness (pretty much in order of abundance), they required Professor Rochus Vogt to quarterback the most generously funded project in the history of the National Science Foundation (NSF).

Fouls and a funding fumble

Vogt had previously proved to be a volatile and demanding provost. And just as Peyton Manning was called for a foul with a young lady doctor in Tennessee, Vogt was sacked from his provostship for excessive agitation of CalTech’s board of trustees. Although hailed a hero for obtaining more than $300 million in NSF funding, the leopard did not change his spots.

By the early 1990’s, LIGO director Vogt had alienated Drever from the collaboration. A lawsuit for infringement on academic freedom loomed. Vogt chafed his NSF overseers and they took a time-out funding LIGO. The ax fell and Vogt’s head rolled like a squib kick.

Caltech tapped a savvy, deal-making professor to call LIGO’s signals. But many of the university’s faculty members believed the collaboration hogged materials, scant lab space, and perhaps most irritatingly, headlines. There was retaliation from within: not one of LIGO’s deserving assistant professors was awarded tenure; and from without: a National Medal of Science recipient encouraged NSF to drop kick LIGO, calling it small science with a big budget.

The collaboration persevered to design, build, and commission LIGO sites in Livingston, LA and Hanford, WA. After struggling in vain for almost a decade to detect gravity waves, LIGO appeared to be washed up. But the brilliant scientific staff developed improved subsystems for the laser interferometers. Advanced LIGO featured a higher power laser, reducing shot noise; more massive mirrors with better coatings to minimize thermal noise; and quieter, more stable mirror supports and vibration isolation to extend the detection range down toward 10 Hz, believed to be a key threshold for gravity wave detection.

The Denver Broncos’ Super Bowl 50 victory was enabled by tenacious, penetrating defense. In fact, the defense scored more touchdowns than the passing offense—Advanced LIGO’s super-sensitive interferometer in Livingston, LA was clutch on September 14, 2015 when it detected a 30-solar-mass chirp. An instant later, 0.0069 s, the same chirp jiggled Hanford’s interferometer. LIGO scientists sifted the data and observed a waveform whose frequency began near 35 Hz and quickened to 250 Hz, achieving peak strain amplitude of a whopping 1E-21 near 150 Hz. The total elapsed time from the signal’s initiation to its complete damping was 0.2 s.

The data demonstrated that gravitational radiation had been generated by the merger of a very compact binary system … lovingly denoted GW150914. The system’s initial masses were 29 and 36 solar masses. This event’s signature was exactly what the field equations upon which Einstein developed the general theory of relativity predicted for the orbital inspiral and coalescence of two massive black holes. 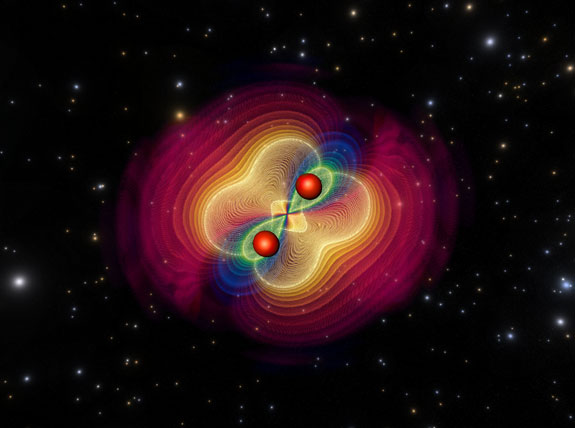 LIGO’s detection of the event was the initial observation of a binary black hole system, proving their existence. The black holes’ close proximity before merger and brief ring-down afterward were decisive clues differentiating GW150914 from the merger of other super-massive cosmic entities such as neutron stars or pulsars, or a single black hole in combination with one of the foregoing.

The resultant black hole’s mass of 62 solar masses indicated that the tiny maximum strain detected by Advanced LIGO, 1E-21, was the result of the complete annihilation of mass equivalent to three of our suns, an energetic explosion indeed! The violent collision of the black hole pair launched a wave-like ripple across the vastness of space-time, travelling outward at the speed of light. En route to the ends of the universe, gravity waves raced through the Earth, jiggling Advanced LIGO’s interferometers, scoring a massive touchdown for basic scientific research.

It was a rewarding season for the champion Denver Broncos, and a comeback dream come true for quarterback Peyton Manning. For American science, Advanced LIGO’s direct observation of gravity waves is a monumental scientific score that could herald renewed ascendancy. This was different from our country’s Superconducting Super Collider fumble, when we failed to observe the god particle, aka Higgs boson, because of the absence of political will. LIGO’s success is the result of scientists, politicians, and a U. S. government entity huddling together, calling the high risk-reward play, fighting through the hard yards, and exploding across the goal line. Einstein’s holiest grail, a single set of equations describing the four fundamental observable forces, a unified field theory as he referred to it, could be within reach. Let’s keep the drive alive and go for two.

Dr. Michael T. Gamble is a former LIGO technical consultant. He holds a Ph.D. in mechanical engineering and completed a post-doctoral fellowship at the Massachusetts Institute of technology. He is the author of the high-tech thriller Zeroscape, www.zeroscape-thebook.com.

Dr. Michael T. Gamble is a former staff member of the physics division of the Los Alamos National Laboratory, where he researched directed-energy...