Most people in the tech world are well aware of quantum computing. Sci-Tech Daily mentions that quantum computing utilizes the power of quantum mechanics to perform calculations exponentially faster than the processors we currently have today. Quantum computing uses elements smaller than an atom to complete its processes. The tiniest component in a quantum circuit is known as a quantum bit or qubit. It might seem like it's easy to get quantum bits to interact since they should just be like regular bitwise operators shrunk down. Unfortunately, the microscopic world of quantum subatomic particles doesn't work the same way as the things we can see. That's why there's an entire field of research dedicated to figuring this out.

Qubits function as quantum particles. However, there's an inherent error that seems to pop up when using certain operations with qubits. The two-qubit gate problem has significant errors, and since it's such a fundamental part of quantum processing, that it throws a wrench in the realization of this technological advancement. However, recent research has found a way to significantly reduce those errors, so much so that it may help to make for a more dependable quantum computing core. A paper published in the journal Physical Review X covers the details of this remarkable achievement. 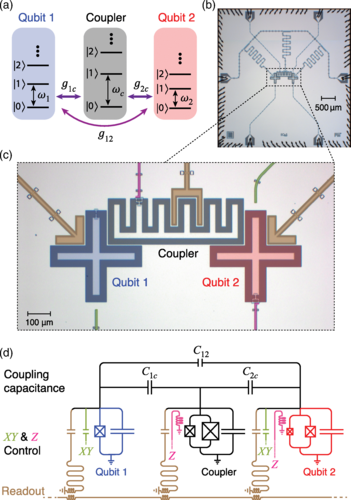 The Problem Of Noise

When quantum buts are used for holding and transferring data, there will always be an element of uncertainty. Qubits are fragile mechanisms and can quickly become disturbed, a phenomenon known as decoherence. When this phenomenon occurs, the qubits lose their quantum mechanical behavior. In earlier experiments, the MIT team that made the breakthrough experimented with tunable couplers. The supposition was that the couplers could preserve the qubits' fragile quantum state. Using the tuners to switch the qubits on and off allowed them to be more resilient. This tunable coupler advance seemed to be the right track, as many researchers agreed it appeared to be helping with the issue of decoherence.

In quantum computing, gates can be either one-qubit or two-qubit gates. The tunable couplers were excellent for use with one-qubit gates, but errors showed up consistently when the two-qubit gates were used. These resulted from residual interactions between both qubits in the gate or either qubit and the coupler. Before using the coupler, these errors were insignificant and could be safely ignored. Unfortunately, with the use of the coupler, the issue becomes too pronounced to simply leave it be. These errors are likely to increase exponentially with the scaling up of the quantum computer into millions of qubits. The paper describes a way around that two-qubit error.

So how did they fix the problem that, admittedly, they introduced in the first place? Instead of reversing their coupler idea and going back to ground zero, the MIT team decided to go all-in on the coupler solution. The result was a 99.9% fidelity for calculations done using the two most common two-qubit gates. This level of fidelity makes quantum computing seem like an attainable goal now. In general terms, with higher fidelity gates, there's the potential for the qubit model to be scaled up. The high fidelity translates into more reliable computation at higher scales.

The researchers utilized the coupler's higher energy levels to serve as a dampener. The energy level difference canceled out the problematic interactions leaving the two-qubit gates with far less error. As the researchers noted, better design and refinement of the coupler are needed. While the current experimental state shows promise, the MIT team thinks that couplers could be streamlined to reduce errors in two-qubit gates even further. The next generation of quantum computers is likely to be error-corrected. Additional qubits will be added to provide redundancy and offer more robust solutions to problems. The answer to the two-qubit problem opens the door to a jump in computing power. Redundancy only works if the gates in question are sufficiently good. Without the couplers, the gates were not good enough to introduce redundancy. With the couplers and this new fix, we may actually see the evolution of quantum computing to the next level.

The Next Step May See An Explosion in Computing Power