Note: California voters approved medical marijuana in 1996, but the retailing of pot did not bloom until 2009, when local communities and the state finally issued “guidelines,” proving once again that you do not need marijuana to procrastinate.

Wednesday, Nov.4: Friend from England, soon to visit, asks if can arrange “some good smoke” while he visits. Not that it’s a priority, of course.

Monday, Nov. 9: Friend from England calls “just to see if you’ve made any progress.” Decide to see doctor. But where? Not mine!

1:20: Counter guy says “Why don’t you go upstairs? We have a hookah room! Everybody goes up there.” Go up there.

-- Are there many French who are farmers?

--Is it wrong to see an old girlfriend if you are not wearing underwear?

--Why is Vanilla Sky so awesome a movie? And why doesn’t anyone else like it?

--Is it possible for the Virgin of Guadalupe to appear on a slice of prosciutto?

9:00pm:  Decide to be adventurous. Those “medical dispensaries” are so phoney! Go to “score some bud” in dicey end of famous Castro District.

9:40pm: Approached by dealer. Says: “This shit will make your ears bleed!” But like my ears! Important for hearing! Also: Am often told ears are “cute.” Anyway,  ask dealer for “not too powerful” stuff. Dealer splits b/c thinks am crazy

9:50pm: Getting foggy and chilly. Surprise.  Approached by nice lady in heels who asks if I would like her to 'polish' something. Tell her no b/c housekeeper already takes care of dishes, silverware, etc....

Friday, July 2: Wife Erminia says: “You’re getting lazy and procrastinating again. Maybe you are smoking too much?” Deny. 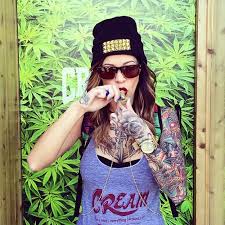 Awesome in every way!

Madzilla’s advice on how to meld porniness and pot? “Get a mouthful of smoke and, like, fill your lungs up but don’t, like, force it out. Just push out your tongue and it just floats out. And just tilt your head  back so it doesn’t burn your eyes.”
Remarkable how same advice used for other things. But love Madzilla! [video at laweekly.com]