Dinosaur tracks, once neglected, are now considered a key source of scientific information on dinosaur behavior and ecology.

A new study appearing in the May issue of The Journal of Geology provides fascinating insight into the factors geologists must account for when examining dinosaur tracks. The authors studied a range of larger tracks from the family of dinosaurs that includes the T. Rex and the tridactyl, and provide a guide for interpreting the effects of many different types of erosion on these invaluable impressions.

“Well-preserved vertebrate tracks in the rock record can be an invaluable source of information about foot morphology, soft tissue distribution, and skin texture,” write Jesper Milàn (Geological Institute, University of Copenhagen) and David B. Loope (Department of Geosciences, University of Nebraska, Lincoln). “However, in most instances, the tracks are less than perfectly preserved, and sometimes they can be barely recognizable as tracks at all.”

With this in mind, Milàn and Loope sought to describe and categorize different levels of preservation. For example, dinosaur tracks may still exist as true tracks, that is, the original prints left in the ground by the dinosaur. True tracks preserve many of the anatomical details of the foot, such as number of digits and impressions of claws.

However, the true tracks may be filled with sediment or the original tracked surface may have eroded away. In the latter case, erosion may expose prominent layers of concentric circles extending from the former location of the true track. These “undertracks” reveal the squishing and displacement of sand when the heavy dinosaur took a step. 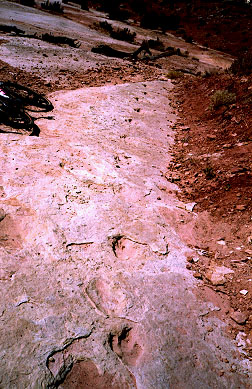 “The tracks and undertracks of large theropods found in the [Middle Jurassic] Entrada Sandstone at the studied locality come in a wide range of morphologies, mainly as a result of present-day erosion that has exposed the track-bearing surfaces at different depths,” the researchers explain. “[They] demonstrate that great care should be taken when describing fossil footprints that have been exposed to subaerial erosion, because the shape, dimensions, and general appearance of the footprint become seriously altered by erosion.”

Geologists also must account for whether the step was taken on a sloped surface or on a horizontal surface, and whether it was taken during dry season or wet season. 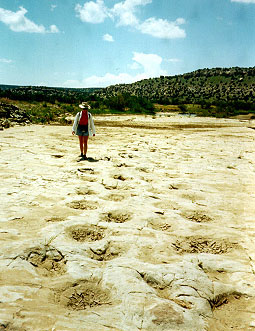 For example, estimating foot length from tracks can be inaccurate without these considerations – the more erosion that has occurred, the larger the apparent dimensions of the track. Applications of this apparently larger foot size derived from an undertrack may lead to calculations of higher estimated hip length, and, as the authors point out, may also lead to slower speed estimates.

Jesper Milàn and David B. Loope, “Preservation and Erosion of Theropod Tracks in Eolian Deposits: Examples from the Middle Jurassic Entrada Sandstone, Utah, U.S.A.” The Journal of Geology: 115, p. 375-386.