Hopes are rising for one of the world’s rarest birds after the discovery of the largest flock seen for more than 100 years.

More than 3,000 critically endangered sociable lapwings have been found in the Ceylanpinar district of south-eastern Turkey after a satellite tag was fitted to one of the birds migrating from breeding grounds in Kazakhstan.

The tracked lapwing had flown more than 2,000 miles from its nesting site, where numbers of the species have plunged following the collapse of Soviet farming. The bird flew north of the Caspian Sea, then down through the Caucasus and south into Turkey. 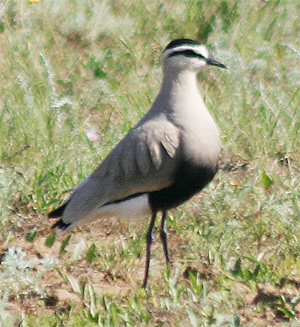 Sociable Lapwings can now be a lot more sociable.

Other birds including geese, albatrosses and bald ibis have been fitted with satellite tags before but the sociable lapwing is the smallest bird yet to carry such a tracking device.

The RSPB’s Dr Rob Sheldon, who tagged the bird in Kazakhstan, said: “This discovery is something we didn’t dare dream of. The sociable lapwing is one of the rarest birds on earth and suddenly it’s been found in these large numbers.

“It shows just how important both Kazakhstan and Turkey have become for the survival of this species. The next step is to protect the bird, both on its breeding grounds and at all the key sites on its migration route.”

Only 200 pairs of sociable lapwing were thought to remain in 2003 when the bird was classified as critically endangered, the highest level of threat there is.

Nests at breeding sites were being trampled where land was still farmed and elsewhere, vegetation was too dense for young chicks to survive. Breeding has improved more recently, however, and conservationists feared that hunting and habitat change on migration routes were reducing the bird’s numbers.

Then, last Friday, researchers from the Turkish conservation group Doga Dernegi found 1,800 sociable lapwing in Ceylanpinar and the next day, a total of 3,200 of the birds. They were following the co-ordinates provided by satellites for the bird that had flown from Kazakhstan.

Özge Balkiz, a scientist at Doga Dernegi, said: “This is a major breakthrough in efforts to help these birds and will be enormously significant in planning their protection. They could still move on to Iraq or East Africa but if they stay in Turkey, it will be much easier to make them safe. We can keep an eye on them here, raise awareness amongst local people and work with the Turkish government to protect the areas they are using.”

The tagging project is partly paid for by the UK government’s Darwin Initiative and conservationists from Britain and Kazakhstan hope to win new funds to tag more birds next summer.

The long-term hope is that other migrating flocks will be found and that researchers can relax their efforts to help the bird.

Maxim Koshkin of the Association for the Conservation of Biodiversity in Kazakhstan, said: “Understanding the migration from breeding sites in Kazakhstan is essential for the future protection of this species, so the news of such a large flock is a great cause for celebration.”

Guven Eken, Executive Director of Doga Dernegi, said: “By tracking a single bird from its Kazakh breeding grounds, we have found the location of most of the world population of these birds in Turkey. Sociable lapwings are finally living up to their name.”

·The sociable lapwing, Vanellus gregarius, or sociable plover, at 30 cm long is slightly smaller than the northern lapwing. It has a striking white eye stripe and black crown and a harsh call. Unlike the northern lapwing, it is not dependent upon water, breeding on dry grassland where pairs lay three or four eggs in shallow scrapes.

·The last evidence of large flocks of sociable lapwing was published in 1890 when between 8,000 and 10,000 were seen in Kazakhstan.

·Sociable lapwings are occasionally seen in the UK, most recently at the RSPB’s Rainham Marshes reserve in east London in December 2005.

·The Darwin Initiative is a small grants programme that aims to promote biodiversity conservation and the sustainable use of resources around the world. The Initiative is funded and administered by Defra.

·The tags used for the sociable lapwing weighed just 9.5 grammes. Previously, a bar-tailed godwit, a large wading bird, was the smallest bird tracked by satellite. The RSPB and Syrian conservationists last year tracked three bald ibis to find their over-wintering sites. The tags attached to those birds weighed 12g. Tracking equipment is expensive. Each tag costs £1,500 with data collection costing another £50 per month.

·The bird tracked by scientists left the breeding grounds near Korgalzhin in central Kazakhstan on August 3 and arrived at Viransehir, Turkey around October 8.

·Level of threat for wildlife is graded by the IUCN – World Conservation Union. More details at http://www.iucnredlist.org/