Kimberly Crandell
'Tis the season for the local supermarkets to feature delicately balanced displays of gravy, stuffing mix, and cranberry sauce. Thanksgiving is almost upon us, and the centerpiece of the upcoming meal for 95% of families will be the traditional roast turkey.

Americans gobble up a lot of turkey: 267 million­ turkeys are sold in the United States each year. Considering all those turkeys, it may surprise you to hear that there's one that dominates the competition at the supermarket: the broad-breasted white turkey. Most of us have never eaten anything else.

For several decades researchers have been using science to build a better Thanksgiving turkey.  Today's big turkeys owe their large size to the incorporation of a special diet, vaccinations, and selective breeding. With selective breeding, also known as artificial selection, two members of the same species are bred to exploit desirable dominant characteristics -- which they pass along to their offspring.  In the case of Thanksgiving turkeys, the characteristic of choice is: big breast muscles. 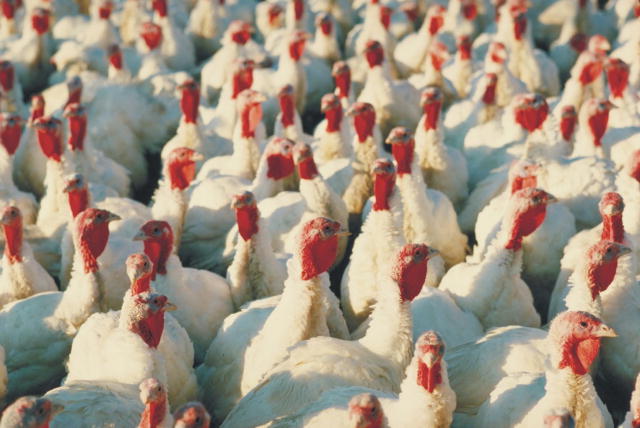 The result is the big-breasted "super turkey". While this is the desired result for consumers, the turkeys themselves face problems due to their bulked-up bodies.  Industry-bred birds have such unusually large breasts, so disproportionate with the rest of their bodies that they often have trouble standing, walking and mating.  Therefore these turkeys rely on artificial insemination for reproduction. In addition, the mother turkey is never in contact with her young. This means that the young chicks don't get a chance to pick up on survival skills or behavioral clues from the mother as they would in the wild. These specially bred, domesticated turkeys are totally dependent on breeders for survival.  Their limited family tree has bred them to be dim-witted and disease-prone; so they're given antibiotics to prevent a variety of ailments. Industry turkeys are also abnormally fast-growing, reaching an average of 32 pounds in a mere 18 weeks.

The resulting end product is a quick-to-market large turkey, containing a generous amount of white meat -- which is exactly what consumers have demanded over the years.  But despite its prevalence both in the supermarkets and ultimately on Thanksgiving tables, is it really a "better" turkey?  Some think not, and instead are singing the praises an alternative to factory breeding: Heritage Turkeys.

Heritage Turkeys are the ancestors of the common Broad-breasted White industrial breed. 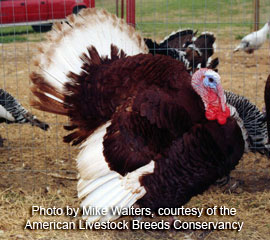 Before supermarkets and distributors made this industrial breed the dominant bird on the market, diverse breeds such as the Narragansetts and Bourbon Reds offered families a turkey with greater flavor and texture. Now such turkeys, known as Heritage Breeds or "standard" turkeys, are making a comeback with the help of small enthusiast groups and the Slow Food movement. Slow Food aficionados value knowing where the food they eat comes from, how it's raised, how it tastes, and how it's linked to the community and the environment. And they'll tell you a heritage bird isn't in the same league as the frozen, bowling-ball shaped turkey in your local market's freezer. These birds have rich, gamey meat that doesn't need gravy to add flavor. 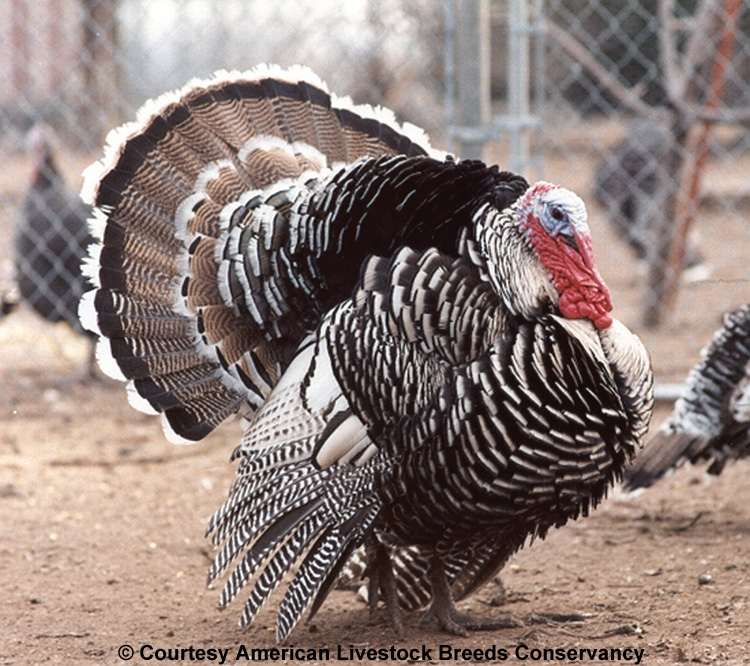 Most breeds of heritage turkey were developed in the United States and Europe over hundreds of years, and were identified in the American Poultry Association's turkey Standard of Perfection of 1874.  But by the 1960's Heritage Turkeys had been driven from the market by the industrial Broad-Breasted White.  By 1990 they were very near to extinction. But in the 2006 U.S. turkey census, there were about 8,800 heritage turkeys -- a big jump from the 1,300 heritage turkeys in 1997. Heritage Breeds have been quietly gaining a renewed market and respect due to their flavor and superior biological diversity ever since.

With rich tasting meats more moist and flavorful than the mass produced large-breasted turkeys of today, Heritage Breeds owe their taste to diverse diets and extended life-spans. Dining on fresh grass and insects, these birds exercise and even help control farmer's pest problems.  However, raising Heritage Breeds is more costly and time consuming than raising White Breasted Toms. While supermarket turkeys mature in 18 weeks, Heritage birds take anywhere from 24-30 to reach their market weight. But those who have tasted Heritage Breeds say the cost and the wait are well worth it.

On February 25, 2008, approximately 70 food professionals, chefs, food writers, and food connoisseurs gathered at Ayrshire Farm in Upperville, VA, to participate in a blind tasting comparing one industrial and eight heritage varieties of turkey. 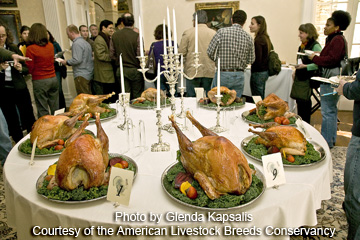 The purpose of the event was to give a fair and parallel comparison of nine varieties of turkey to determine which, if any, stand out in flavor. This unique event was conducted blind, with each turkey variety cut into bite-sized pieces in covered dishes at numbered stations. Numbered toothpicks and scorecards were provided to aid in evaluating the turkeys. Additionally, whole, roasted turkeys were placed on a table, with their corresponding number, so that appearance could be appraised as well.  The turkeys were scored based on flavor, texture, tenderness, smell, and appearance.

After tasting the turkeys, the enthusiastic crowd was asked to vote for their favorite number before the varieties were revealed. Each of the nine turkeys had supporters, but when the tally was over all eight of the heritage turkey varieties came out ahead of the industrial variety – a Butterball.

The clear winner in this historical tasting was the Midget White turkey, with second place going to the Bourbon Red. The top two favorites each received nearly twice as many votes as any of the other turkey varieties.  The heritage turkey varieties tasted were the Royal Palm, Chocolate, Slate, Narragansett, Bronze, Bourbon Red, Midget White, and Black.

It may be a bit late to get your hands on a Heritage Turkey for this year's Thanksgiving table.  A combination of factors -- including an exceptionally cold winter in breeding states, and resulting late breeding cycles -- have reduced the available stock considerably for 2008.  But it's never too late to plan for next year.  And due to their rising popularity and limited availability, it wouldn't be a bad idea to reserve your 2009 Heritage Turkey now.  For more information, check out the Heritage Turkey Foundation website.