Home > Neuroscience > The Science of Motherhood

Kimberly Crandell
Anyone who has worked with children with autism knows that, based on symptoms alone, this disorder is comprised of several different types. Yet, surprisingly, no authoritative study exists to validate this supposition. That is about to change.

For the first time ever, a long-term study of boys and girls with and without autism is being  conducted. Jam-packed with scientific evaluations of each participant that will provide data scientists can use for decades to come, this study is destined to determine once and for all if there are subtypes of autism, and, if so, exactly what those subtypes are.  This ambitious study is taking place at the UC Davis M.I.N.D. Institute.

Named the Autism Phenome Project (“phenome” means “all observable characteristics”) it is the largest and most comprehensive assessment of children with autism ever attempted. It aims to distinguish among recognized subgroups, or phenotypes, of autism, linking them with distinct patterns of behavior and biological changes. Ideally, the findings will lead to targeted — and thus more effective — treatments specific to each child’s type of autism.

“Some children have autism symptoms from birth, others not until their second birthday,” explains principal investigator David Amaral, who serves as the M.I.N.D. Institute’s research director. “Which ones have gastrointestinal problems or immune problems? Who is more likely to have seizures? At the moment, we don’t really have the big picture.”

“This project is designed to gather sufficient information about a large enough group of kids to parse them into homogeneous, or similar, subtypes,” he adds. “At that point, researchers can explore the causes of each type of autism.”

As co-principal investigator Sally Rogers puts it, “The M.I.N.D. Institute was created to bring scientists together who had expertise among them in all the aspects of autism so that we could
look at the whole of autism in a single study, rather than just one part at a time. That’s what the Autism Phenome Project (APP) is all about: parents, children and researchers forming a team to tackle all of autism, at once.” 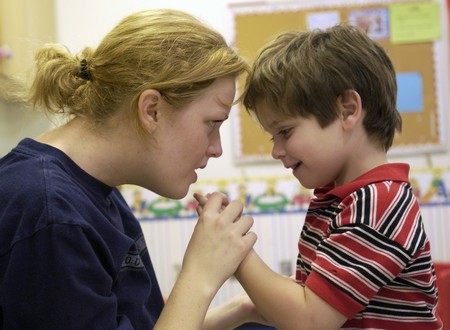 Led by Amaral, a multi-disciplinary team of more than 50 M.I.N.D. Institute scientists began a pilot study in 2006 of 55 boys and girls aged 2 to 3.5 years, and their families. The project is ultimately projected to include 1,200 children. The mix will include 800 families with children with autism and 400 families with typically developing children, the latter as a control group.

“It’s a numbers game, in a sense,” explains Amaral, a UC Davis professor of psychiatry and  behavioral sciences. “If, for example, there are 10 subtypes, then you’re bound to be more  certain about your results with 1,000 subjects than with just 100.”

The participating children and their families are making an admirable commitment, as will the others who join this longitudinal study in the months to come: subjects are followed for three to eight years via approximately six UC Davis visits the first year and one to two visits in each of the subsequent years.

“It’s enormously gratifying for me to see how enthusiastic and excited the families are to  participate in this groundbreaking study,” says Susan Rumberg, the study’s family support liaison. “Whether they have children with autism or typically developing children, these families
just want to help to find a cure. It’s really a noble goal.”

Rumberg serves as a resource for APP families, her many duties including arranging lodging, securing childcare for subjects’ siblings, and meeting any other needs that participating families might have. Along with her co-workers, she’s the star of a series of videos available online at the study’s Web site (www.ucdmc.ucdavis.edu/mindinstitute/research/app/) designed to walk  parents through every step of their involvement with the study.

“I really believe that researchers will be using the data from this study for many years to come,” she adds. “As just one example, every time we do a blood draw, we retain a portion of the blood and DNA in a repository so that this resource can live on for use by researchers in the future, allowing the scientific community to keep making new scientific discoveries.”

Also available to researchers in years to come will be magnetic resonance imaging (MRI) scans of all the subjects’ brains, part of the subjects’ brain function assessments. “Few studies will have so many longitudinal MRIs on kids with autism,” says Amaral. “We’re committed to making these data—and all data acquired by the project—available to the world autism community as rapidly as possible.”

Funding for the project’s approximately $1.2 million per year in expenses has come from a mix of philanthropy, the M.I.N.D. Institute, and, more recently, a portion of a National Institutes of  Health (NIH) grant to the Center for Genomic and Phenomic Studies in Autism at the University of Southern California, for which Amaral is co-director. Amaral and his team are submitting grant applications to the NIH for various aspects of the project; one application, for instance, covers the project’s brain imaging technologies alone. A network of government and philanthropic  grants, overlaid with a matrix of collaborations with research institutions around the country, is expected to cover project costs going forward.

“The Autism Phenome Project will produce the integrated data needed to shorten the road to discovery of the causes, preventions and treatments of autism,” says Amaral. “Simply put, the
results of this project will make the world a better place for our children and for generations to come after them.”

The project is seeking subjects between the ages of 2 and 3.5 years old, both those with autism and those who are developing typically.
For details, visit http://www.ucdmc.ucdavis.edu/mindinstitute/research/app/

If you're interested in reading additional articles on autism, ScientificBlogging's Autism Awareness page provides a listing of all the articles on our site that touch on the subject.
The Science of Motherhood
More Articles All Articles
About