In 2003, astronomers saw a neutron star brighten to around 100 times its usual faint luminosity. This outburst allowed them to discover XTE J1810-197. Detecting pulsations from the source helped classify it as the first transient anomalous X-ray pulsar (AXP). The massive outburst moved it to the rank of magnetar.

Magnetars are perplexing objects. Each one is the highly magnetic core of a star that was once at least eight times more massive than the Sun. When it exploded as a supernova, the core was compressed into a highly compact object, a neutron star, roughly fifteen kilometres in diameter, but containing about as much mass as the Sun. 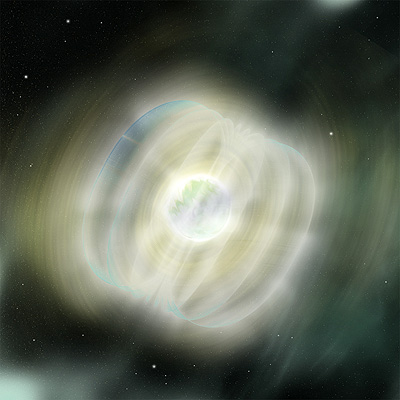 A seismic event accompanied by a powerful burst was observed on one such magnetar, Westerlund 1 in September 2005. Located in a star cluster about 15 000 light-years away in the Ara constellation in the southern hemisphere, the magnetar goes by the unwieldy official name CXOU J164710.2-455216.

Some of these neutron stars possess the most powerful magnetic fields in the Universe, leading to extremely energetic eruptions that send high-energy radiation cascading across space. Astronomers have never been certain whether the outbursts come from the surface of the magnetar itself, or the clouds of electrically charged particles trapped in the surrounding magnetic field.

Now, using data from XMM-Newton, Tolga Güver, Istanbul University, and his colleagues have analysed the X-ray spectrum of XTE J1810-197 using a computer model that incorporates emission from the magnetar’s surface with its subsequent processing as it travels through the object’s magnetic field. This is the first time both regions of a magnetar have been put together in the same computer model.

XMM-Newton observed XTE J1810-197 seven times between 9 August 2003 and 12 March 2006 using XMM's European Photon Imaging Camera (EPIC) on board XMM. During that time, the object faded back to normal brightness, and EPIC recorded the changes in the energies of the X-rays released as it did so. These changes are particularly valuable to astronomers because they can be compared with computer predictions.

Güver and colleagues found that the data were best fitted with a model that traced the outburst to just below the surface of the magnetar and confined it to an area about 3.5 km across. This is a breakthrough because, “Assuming our model is confirmed, we can now distinguish between surface and magnetopheric phenomena,” says Güver.

Their model also allowed them to determine the strength of this object’s magnetic field spectroscopically. It is around six hundred million, million times stronger than Earth’s magnetic field. Encouragingly, this measurement is similar to an estimate made previously for this object based on how fast its spin is slowing down. This boosts the team’s confidence that their model is correct.

Nevertheless, they are not being complacent about their work. “This model will not be the final one about magnetars but it does give us a new point of view onto these fascinating objects,” says Güver.

One thing that remains unclear is the nature of the outburst. It is probably triggered magnetically but exactly how, is still a mystery. The team now plan to use their computer model to investigate more of these celestial objects, using more data from XMM-Newton, in their quest for answers.

Article: ‘The Magnetar Nature and the Outburst Mechanism of a Transient Anomalous X-ray Pulsar’ by T. Güver, F. Özel, E. Göğüş and C. Kouveliotou, The Astrophysical Journal, on 20 September 2007.