News Staff
In Manot, a karstic cave in the North of Israel close to the Lebanese border, excavations that began in 2010 have documented the peopling of the cave for over 100,000 years.

Around 30,000 years ago, the roof of the cave collapsed and sealed the archaeological layers until the 21st century. Beside stone tools and animal bones, some few human remains were preserved. The most spectacular finding was made on an elevated shelf within a small chamber of the cave: a very well preserved "calotte", the upper part of a braincase.

The facial bones which contain a lot of diagnostic traits were missing.

Inference can create a coarse picture with regard to classification when there is a partial braincase which features mainly smooth curvatures. Using mathematical-statistical procedures to analyze 3D data, numerous measuring points in a dense array were located on the virtual representation of Manot and on several hundreds of other braincases to capture differences and similarities and have led to "Virtual Anthropology". 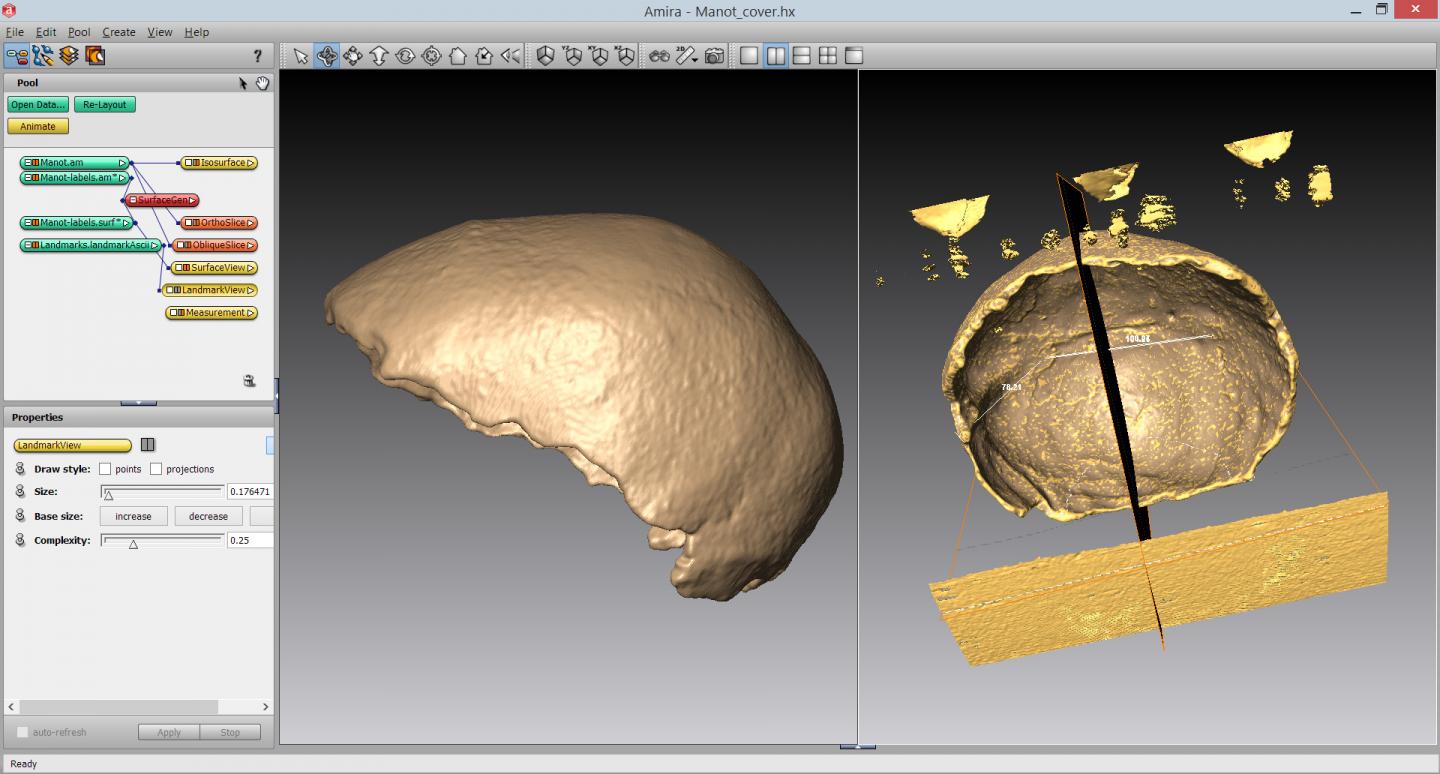 The Manot specimen is on the computer screen, in lateral view (left) and from inside (right).
Copyright: Gerhard Weber

Professor Gerhard Weber from the Department of Anthropology at the University of Vienna and   Dr. Philipp Gunz of the Max Planck Institute Leipzig weres invited by Israeli colleagues to examine carefully computer-tomographic images of the calotte. "The shape analysis shows very clearly that Manot was a modern human. It is interesting that the most similar skulls in our sample come from recent Africans on the one hand, and on the other hand from those modern humans that lived in Europe between 20-30,000 years ago as, for instance, Mladeč 1 or Předmostí 4 from the Czech Republic ."

The morphological results alone would be, however, not enough for a sensation. The Manot people could have been modern humans that later re-migrated from Europe back into the Levant. Luckily, the conditions in the flowstone-cave lead to the accumulation of several thin layers of calcite on the inner and outer surface of the skull fragment. These can be reliably dated with the uranium-thorium method.

They documented an age of approximately 55,000 years. Manot is thus 10,000 years older than any modern human found in Europe, and about 5-10,000 years younger than the point when geneticists predict the appearance of our direct ancestors in Africa.

The Levant as the crossing point of migration

One of the logical migration routes from Africa to Europe leads through the Levantine corridor. The age and the morphology of Manot suggest that the first modern humans took this route. At the same time, they had opportunity to meet Neanderthals which occupied the Levant in this time but could never expand further south. Genetic results indicate that recent humans carry between 1-4% of Neanderthal genes in their genome. So far it was speculated that admixture could have happened in Europe. Manot is changing this picture. It is likely that interbreeding happened already earlier on the way of the first modern humans through the Levant.

"This skull remain at Manot", Weber summarizes, "is exactly what we anthropologists have looked for since decades. It connects perfectly in space and time those separated parts of human history that we have known."