Electromagnetic radiation (light, radio waves, X-rays, and microwaves) contains a varying electric field. When we talk about Polarization of this field, we refer to its direction. A new satellite named the Gravity and Extreme Magnetism Small Explorer (GEMS),  will be the first to systematically measure the polarization of cosmic X-ray sources. It is a new astrophysics mission led by NASA's Goddard Space Flight Center in Greenbelt, Md. 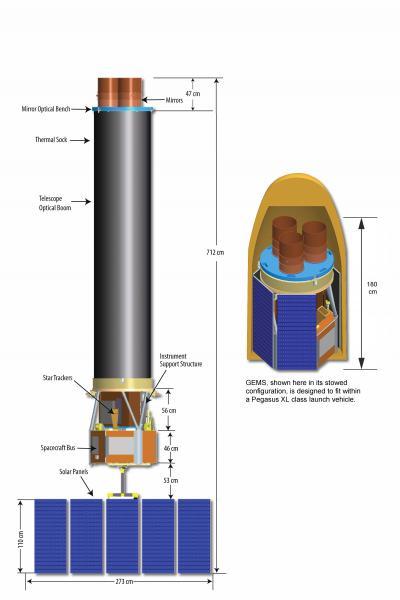 GEMS, the Gravity and Extreme Magnetism Small Explorer, will detect polarized X-rays from supernova remnants, neutron stars and black holes. Polarized X-rays carry information about the structure of cosmic sources that is not available in any other way. (Photo Credit: NASA/GEMS/Barbara Talbott)

"To date, astronomers have measured X-ray polarization from only a single object outside the solar system -- the famous Crab Nebula, the luminous cloud that marks the site of an exploded star," said Jean Swank, a Goddard astrophysicist and the GEMS principal investigator. "We expect that GEMS will detect dozens of sources and really open up this new frontier."

To get a feel for what "polarized" light really means, we can think of the everyday example of putting polarization to use in a pair of sunglasses. Reflected light contains an electric field with a
specific orientation. Because polarized sunglasses block light
vibrating in this direction, they can reduce the glare of reflected
sunlight.

The extreme gravitational field near a spinning black hole not only bends the paths of X-rays, it also alters the directions of their electric fields. Polarization measurements can reveal the presence of a black hole and provide astronomers with information on its spin. Fast-moving electrons emit polarized X-rays as they spiral through intense magnetic fields, providing GEMS with the means to explore another aspect of extreme environments.

"Thanks to these effects, GEMS can probe spatial scales far smaller than any telescope can possibly image," Swank said. Polarized X-rays carry information about the structure of cosmic sources that isn't available in any other way."

"GEMS will be about 100 times more sensitive to polarization than any previous X-ray observatory, so we're anticipating many new discoveries," said Sandra Cauffman, GEMS project manager and the Assistant Director for Flight Projects at Goddard.

Some of the fundamental questions scientists hope GEMS will answer include: Where is the energy released near black holes? Where do the X-ray emissions from pulsars and neutron stars originate? What is the structure of the magnetic fields in supernova remnants?

What makes GEMS possible are innovative detectors that efficiently measure X-ray polarization. Using three telescopes, GEMS will detect X-rays with energies between 2,000 and 10,000 electron volts. (For comparison, visible light has energies between 2 and 3 electron volts.) The telescope optics will be based on thin-foil X-ray mirrors developed at Goddard and already proven in the joint Japan/U.S. Suzaku orbital observatory.

NASA announced June 19 that GEMS was selected for development as part of the agency's Small Explorer (SMEX) series of cost-efficient and highly productive space-science satellites. GEMS will launch no earlier than 2014 on a mission lasting up to two years.

Orbital Sciences Corporation will provide the spacecraft bus and mission operations. ATK Space  will build a 4-meter deployable boom that will place the X-ray mirrors at the proper distance from the detectors once GEMS reaches orbit. NASA's Ames Research Center in Moffett Field, Calif., will partner in the science, provide science data processing software and assist in tracking the spacecraft's development.