Recent observations from NASA and Japanese X-ray observatories have helped clarify one of the long-standing mysteries in astronomy -- the origin of cosmic rays.

Outer space is a vast shooting gallery of cosmic rays. Discovered in 1912, cosmic rays are not actually rays at all; they are subatomic particles and ions (such as protons and electrons) that zip through space in all directions at near-light speed, with energies tens of thousands of times greater than particles produced in Earth’s largest particle accelerators. Cosmic rays incessantly bombard Earth, smashing into the atoms and molecules high up in the atmosphere, and producing cascades of secondary particles that reach the surface. 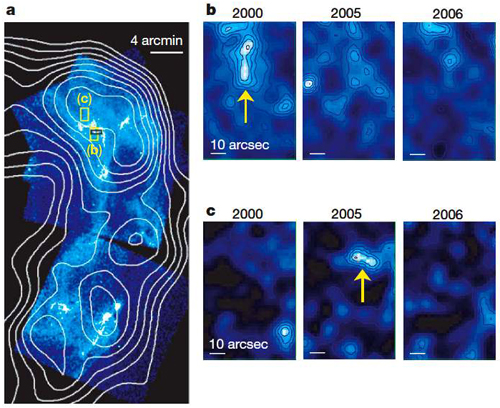 These images from NASA's Chandra X-ray Observatory show small portions of an edge of RXJ1713.7-3946. The small images on the right show hot spots appearing and disappearing. The rapid rise and fall of the spots indicate that electrons are being accelerated to near-light speed in the presence of strong magnetic fields. Click image for unlabeled version. Credit: CXC/Yasunobu Uchiyama/HESS/Nature

Since the 1960s scientists have pointed to supernova remnants -- the tattered, gaseous remains of supernovae -- as the breeding ground of most cosmic rays. These remnants expand into the surrounding interstellar gas, an energetic interaction that produces a shock front containing magnetic fields that can accelerate charged particles to enormous energies, producing cosmic rays.

According to theory, charged subatomic particles bounce like pinballs around the shock front. They pick up speed until they move nearly the speed of light. Last year, observations from NASA’s Chandra X-ray Observatory suggested that electrons are being accelerated rapidly (as fast as theory allows) to high energies in the supernova remnant Cassiopeia A.

Now, Yasunobu Uchiyama of the Japan Aerospace Exploration Agency (JAXA), and four colleagues, have observed the signature of the shock acceleration of electrons, and demonstrated that magnetic fields in supernova remnants are stronger than previously thought, and are thus fully capable of producing cosmic rays.

In a study published in the October 4, 2007, issue of the journal Nature, Uchiyama’s team used Chandra and JAXA’s Suzaku X-ray satellite to look at the northwest edge of supernova remnant RXJ1713.7-3946, located a few thousand light-years from Earth in the constellation Scorpius.

This image from Japan's Suzaku X-ray observatory shows RXJ1713.7-3946. This supernova remnant is the gaseous remnant of a massive star that exploded. The remnant is about 1,600 years old. The contour lines show where gamma-ray intensity is highest, as measured by the High Energy Stereoscopic System (HESS) in Namibia. Credit: JAXA/ Takaaki Tanaka/HESS

With Chandra’s high spatial resolution, the team monitored X-ray hot spots that brightened and faded in less than a year. In particular, a bright hot spot seen in July 2005 was invisible in both July 2000 and May 2006. Such rapid X-ray variability shows that particles are rapidly being produced and lost in a small region of space. Because these same hot spots barely moved from 2000 to 2006, Uchiyama and his colleagues could set an upper limit to the speed of the shock front: 10 million miles per hour. This result helped the team deduce the strength of the magnetic field.

Only one known process can explain the Chandra observations. Electrons must be spiraling along magnetic-field lines and radiating away their energy as so-called synchrotron radiation. For such a rapid increase and decrease in X-ray intensity, electrons must be accelerating and emitting synchrotron radiation in the presence of a magnetic field hundreds of times stronger than typical fields in interstellar space.

"Magnetic field strength lies at the heart of cosmic-ray acceleration theory," says Uchiyama. "Previous estimates of magnetic fields in supernova remnants were based on indirect arguments. In our study, we determine the magnetic field in a direct manner."

"This is an extremely important paper," adds physicist Don Ellison of North Carolina State University in Raleigh, who is not a member of Uchiyama’s team. "This is the first time such rapid X-ray variability has been seen in a supernova remnant. It has been generally accepted that certain X-ray emission in supernova remnants is synchrotron radiation from high-speed electrons, but it is important to nail it down and get a measurement of the magnetic field."

Suzaku spectra of RXJ1713.7 provide independent evidence of rapid acceleration. They show that the hot spots have tangled magnetic fields, which allow particles to bounce back and forth rapidly until they are accelerated to very high energies. Since electrons and protons of a given energy are accelerated at the same high rate, but protons don’t radiate away their energy as electrons do, Uchiyama’s team argues that protons will be accelerated to the higher energies needed to match the energies seen in cosmic rays striking Earth’s atmosphere.

"This paper is important in that it seems to show that cosmic-ray protons can be accelerated to higher energies than previously thought," says physicist Robert Streitmatter of NASA Goddard Space Flight Center in Greenbelt, Md., who is not a member of the team.