Cholera is characterized by acute watery diarrhea resulting in severe dehydration and occurs  when the bacterium Vibrio cholerae infects the small intestine.

How does it happen?

École polytechnique fédérale de Lausanne (EPFL) scientists have found that V. cholerae uses a tiny spear to stab and kill neighboring bacteria - even of its own kind - and then steal their DNA. The V. cholerae predatory molecular killing device is a spring-loaded spear that is constantly shooting out. This weapon is called the "type VI secretion system" (T6SS) and is known to exist in many types of bacteria. When V. cholerae comes close to other bacteria, the spear punches a hole into them, leaving them to die and release their genetic material, which the predator pulls into itself.

Then horizontal gene transfer allows the cholera bacterium to become more virulent - by absorbing the traits of its prey. 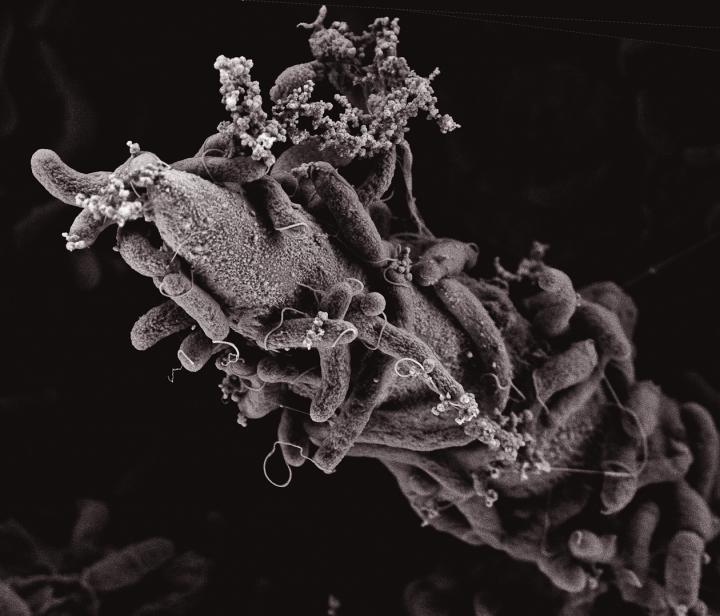 This spear-killing, predatory behavior is triggered by the bacterium's environment. The cholera bacterium naturally lives in water, such as the sea, where it attaches onto small planktonic crustaceans. There, it feeds on the main component of their shells: a sugar polymer called chitin. When chitin is available, V. cholerae goes into an aggressive survival mode called "natural competence". When in this mode, V. cholerae attacks neighboring bacteria with its spear - even if they are of the same species.

The lab of Melanie Blokesch at EPFL set out to explore how V. cholerae uses this behavior to compete for survival in nature. Her lab tested different strains of the bacterium from all over the world, most of which have been implicated in the 7th cholera pandemic, which began in Indonesia in the 1960's, spread rapidly to Asia, Europe, and Latin America, and still affects populations today.

The researchers grew these bacteria on chitin surfaces that simulated their natural habitat on crustaceans. What they found was that the tiny spear is not only part of V. cholerae's natural survival system, but it also contributed to the transfer of genes that could make the bacterium more resistant to threats, even to antibiotics. The researchers then used genetic and bioimaging techniques to identify, in real time, which mechanisms are involved in this event, which is called "horizontal gene transfer".

"Using this mode of DNA acquisition, a single V. cholerae cell can absorb fragments containing more than 40 genes from another bacterium," says Melanie Blokesch. "That's an enormous amount of new genetic information." This phenomenon is referred to as "horizontal" gene transfer, as opposed to the conventional "vertical" passage of genes from parent to offspring.

The importance of this study lies in the fact that horizontal gene transfer is a widespread phenomenon in bacteria, and it contributes to the dispersal of virulence factors and antibiotic resistances. In addition, the chitin-mediated activation of the spear-killing device most likely renders the bacterium more dangerous to patients when they ingest it, as this molecular spear might also kill protective bacteria in the human gut.

The researchers are now extending their investigation into the interplay between the chitin-induced production of the spear and horizontal gene transfer. "By studying this interplay, we can begin to better understand evolutionary forces that shape human pathogens and maybe also transmission of the disease cholera," says Blokesch.