News Staff
A new paper believes it can measure the precision with which people make decisions - by pupil size before they are presented with any information.

Spontaneous, moment-to-moment fluctuations in pupil size predicted how a selection of participants varied in their successful decision making. A larger pupil size indicated poorer upcoming task performance, due to more variability in the decisions made once the relevant information was presented. The authors also found that certain individuals who had the largest pupils overall also tended to be the least consistent in their decisions.

But don't start believing in pupil determinism just yet.  The study was tiny, results were obtained by measuring the pupil size of 26 volunteers as they performed a visual choice-based task designed to mimic the kinds of challenging perceptual decisions that are frequently encountered in everyday life. The results were obtained by measuring pupil size before each segment of the task began and monitoring each participant's subsequent performance in deciding which direction a cloud of dots was moving in. These results were then combined with a simple mathematical model that described how people make decisions. 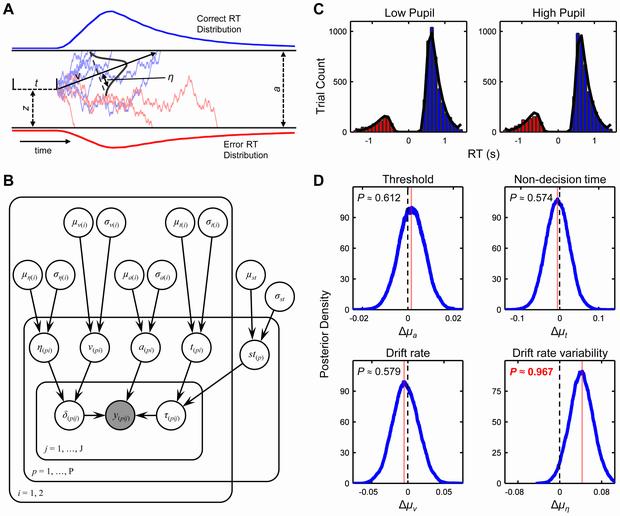 A. Schematic representation of the drift diffusion model (DDM). Noisy sensory evidence is accumulated over time from starting point z at mean drift rate v, until one of two thresholds (separated by a) is reached and a decision is made. Non-decision-related processing time is accounted for by t. Drift rate is normally distributed across trials with standard deviation η. Upper and lower panels show simulated RT distributions for correct and incorrect decisions. B. Graphical representation of the hierarchical DDM that was fit to the observed behavioral data. Nodes receiving arrow projections in the graph denote distributions that are parameterized by the parent nodes. Subscripts represent baseline pupil diameter bin i, participant p, and trial j. The shaded node y indicates the observed bivariate accuracy and response time data. st = between-trial variability in t. Starting point z was fixed at a/2 across p, i and j (not shown). C. Model predictions after hierarchical parameter estimation, illustrating the fit of the model to the observed data sorted into two bins according to baseline pupil diameter. Negative distributions indicate error RTs. Histograms illustrate observed data; overlaid lines show predictions. D. Bayesian posterior distributions representing the effect of pupil diameter bin (high – low) on selected model parameters. The μ notation refers to the estimated mean of the group-level distribution for each parameter. P denotes the mass of the effect distribution that is above or below zero. Vertical red lines indicate distribution modes.
DOI: 10.1371/journal.pcbi.1003854

Pupil size gave a good indication of how responsive a person is at any given moment, with larger pupils correlating with increased responsiveness, though little was previously understood about how pupil size might relate to our ability to make reliable perceptual judgments. The findings reveal that a person's state of responsiveness is a key determinant of the variability of the decisions they make about the world around them - and pupil size
can show it.

When hyper-responsive, our decision making appears to be less reliable and will more likely lead to undesirable outcomes. Ideally, the findings also open up areas for research aimed at improving the precision with which people make decisions, but in the real world it means politicians and marketers will seek better outcomes.

Lead author Dr. Peter Murphy of Leiden University says, "we are constantly required to make decisions about the world we live in. Researchers have long known that the accuracy and reliability of such everyday decision making can be tremendously variable for different people at different times, but we understand quite little about where this variability comes from. In this study, we show that how precise and reliable a person is in making a straightforward decision about motion can be predicted by simply measuring their pupil size. This finding suggests that the reliability with which an individual will make an upcoming decision is at least partly determined by pupil-linked 'arousal' or alertness, and furthermore, can potentially be deciphered on the fly. This new information could prove valuable for future research aimed at enhancing the precision of decision making in real time."