News Staff
Neanderthals - Cave Men, in colloquial terms (as if Cro-Magnon emerged in a medieval castle; they all lived in caves if they could) - don't get a lot of respect for being smart.  But they probably had a few things going for them, since they survived until around 20,000 B.C.

50,000-year-old Neanderthal teeth from the El Sidrón site in northern Spain show that they were not just meat-eaters, nor were they eating plants just as foragers.  They may even have understood natural medicine. 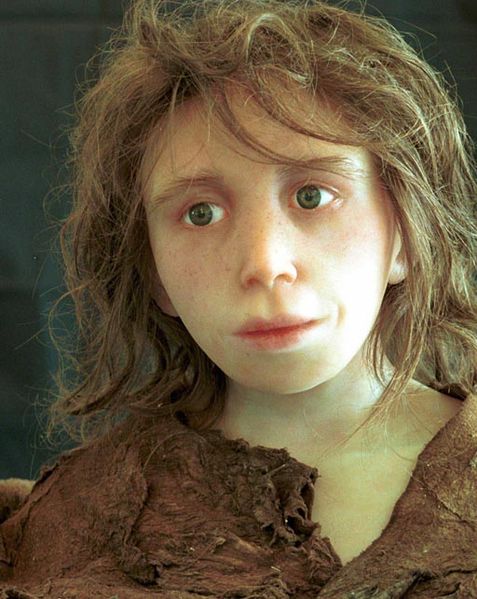 Graphical representation of the face of a Neanderthal child from the Anthropological Institute, University of Zürich.

The researchers say the starch granules and carbohydrate markers in the samples, plus evidence for plant compounds such as azulenes and coumarins, as well as possible evidence for nuts, grasses and even green vegetables, argue for a broader use of ingested plants than is often suggested by stable isotope analysis.

Lead author Karen Hardy, a Catalan Institute of Research and Advanced Studies (ICREA) Research Professor at the Universitat Autònoma de Barcelona (UAB) and an Honorary Research Associate at the University of York, UK, said, "The varied use of plants we identified suggests that the Neanderthal occupants of El Sidrón had a sophisticated knowledge of their natural surroundings which included the ability to select and use certain plants for their nutritional value and for self-medication. While meat was clearly important, our research points to an even more complex diet than has previously been supposed."

Earlier research by members of the team had shown that the Neanderthals in El Sidrón had the bitter taste perception gene. Now trapped within dental calculus researchers found molecular evidence that one individual had eaten bitter tasting plants.

Dr Stephen Buckley, a Research Fellow at the University of York's BioArCh research facility, said, "The evidence indicating this individual was eating bitter-tasting plants such as yarrow and camomile with little nutritional value is surprising. We know that Neanderthals would find these plants bitter, so it is likely these plants must have been selected for reasons other than taste."

Ten samples of dental calculus from five Neanderthals were selected for this study. The researchers used thermal desorption and pyrolysis gas-chromatography-mass spectrometry to identify both free/unbound and bound/polymeric organic components in the dental calculus. By using this method in conjunction with the extraction and analysis of plant microfossils, they found chemical evidence consistent with wood-fire smoke, a range of cooked starchy foods, two plants known today for their medicinal qualities, and bitumen or oil shale trapped in the dental calculus.

Professor Matthew Collins, who heads the BioArCh research facility at York, said: "Using mass spectrometry, we were able to identify the building blocks of carbohydrates in the calculus of two adults, one individual in particular having apparently eaten several different carbohydrate-rich foods. Combined with the microscopic analysis it also demonstrates how dental calculus can provide a rich source of information."

The researchers say evidence for cooked carbohydrates is confirmed by both the cracked/roasted starch granules observed microscopically and the molecular evidence for cooking and exposure to wood smoke or smoked food in the form of a range of chemical markers including methyl esters, phenols, and polynuclear aromatic hydrocarbons found in dental calculus.

Professor Les Copeland from the Faculty of Agriculture and Environment, University of Sydney, Australia, said, "Our research confirms the varied and selective use of plants by Neanderthals."

The study also provides evidence that the starch granules reported from El Sidrón represent the oldest granules ever to be confirmed using a biochemical test, while ancient bacteria found embedded in the calculus offers the potential for future studies in oral health.

The archaeological cave site of El Sidrón, located in the Asturias region of northern Spain, contains the best collection of Neanderthal remains found in the Iberian Peninsula and one of the most important active sites in the world. Discovered in 1994, it contains around 2,000 skeletal remains of at least 13 individuals dating back around 47,300 to 50,600 years.

Antonio Rosas, of the Museum of Natural History in Madrid – CSIC (Spanish National Research Council), said: "El Sidrón has allowed us to banish many of the preconceptions we had of Neanderthals. Thanks to previous studies, we know that they looked after the sick, buried their dead and decorated their bodies. Now another dimension has been added relating to their diet and self-medication."

Fieldwork at El Sidrón, conducted by researchers from the University of Oviedo, is funded by the Department of Culture, Principality of Asturias. The dental calculus samples used in this study were provided by the laboratory leading the study of the human remains discovered in El Sidrón, which is located at the Museum of Natural History in Madrid – CSIC.